Swiss watch manufacturer IWC Schaffhausen is having a doozy of a year in 2021, launching a slew of new timepieces. From new pieces raising money and awareness for noble charities to new case sizes for classic models, it’s safe to say IWC is on a roll.

That rolling theme is continuing with the company’s latest Pilot’s Watch release, designed in collaboration with, and to celebrate 75 years of, the “Blue Angels” U.S. Navy Flight Demonstration Squadron. The third timepiece released to commemorate the air display team, this latest model – Ref. IW389109 –  arrives with a blue ceramic case, matching blue rubber strap and hints of yellow, in reference to the U.S Navy’s official colour scheme of blue and gold.

The blue ceramic case was made possible by mixing zirconium oxide with “other metallic oxides.” Although not confirmed, it looks remarkably similar to the Pilot’s Watch Automatic Edition “Laureus Sport for Good,” also recently released and which also used a blue ceramic case for the first time.

The Pilot’s Watch Chronograph Edition “Blue Angels,” however, was developed in collaboration with members of the Blue Angels squadron in Pensacola, and features the U.S. Navy’s Wings of Gold crest at 6 o’clock, along with yellow accents on the chronograph seconds hand, small seconds hand and day-date window.

Power comes from IWC’s in-house manufactured 69380 calibre, which allows for a stopwatch function and 46-hours of reserve power. Limited to an annual production of 500 pieces, the IWC Pilot’s Watch Chronograph Edition “Blue Angels” is available now through IWC boutique stores or the company’s website.

The Blue Angels flight demonstration squadron was formed in 1946, making it the second oldest formal aerobatic team in the world, behind only the French Patrouille de France squadron, formed in 1931. The squadron performs for millions of spectators every year, featuring in at least 60 shows. 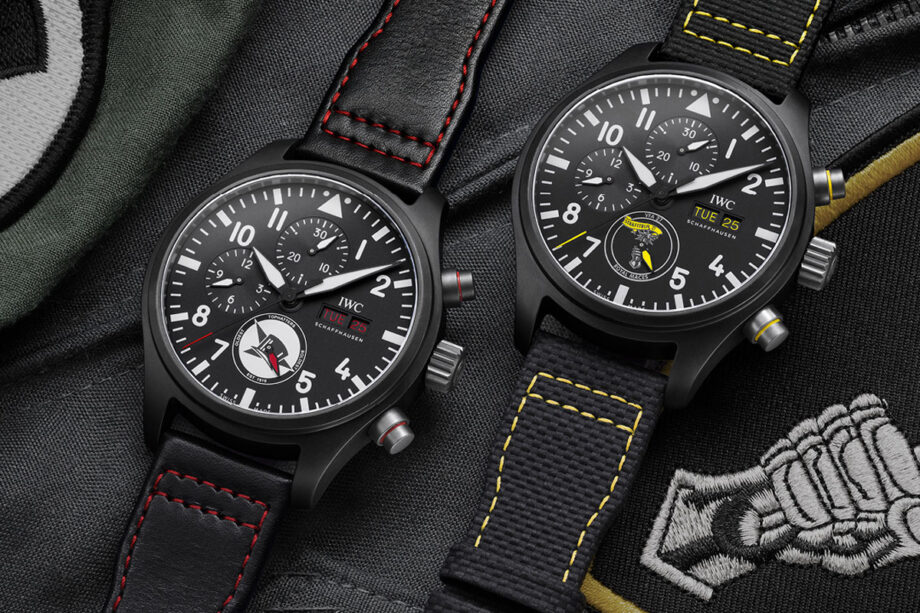 Both feature black zirconium oxide cases and make use of Certanium for the pushers and crown. They then feature each squadron’s unique emblem: A “Maces” patch or a classic top hat, at 6 o’clock.

These two exclusive collaboration models are also limited to 500 models a year and are available now.