Qantas twanged Australia’s emotional chords this week, with a video called Fly Away that had half the nation choked up.

After not having been able to travel internationally for a year and a half, the video showed a bunch of Aussies imagining what it will be like to travel and see loved ones again.

That video has been reported on extensively, with many pointing out how it captured a common sentiment, sparked FOMO and wetted eyes.

“We’ll be there soon,” the video ends, with a flight attendant reassuring a man looking at a photo of a loved one.

Qantas captioned the video: “We’re all dreaming about the day we can fly away to see family, friends or enjoy a long-overdue holiday.”

“Getting vaccinated is an important step that every Australian can take to bring us that little bit closer to life as we knew it.*”

The video also, in some speculative corners of Instagram, sparked questions over when that fateful day will actually be.

When will we be able to travel internationally again?

With the proviso that this is complete speculation, one Perth based frequent flyer and first class points hacker Immanuel Debeer reckons he may have spotted a clue as to when our borders could open, at the 1 minute 22-second mark. 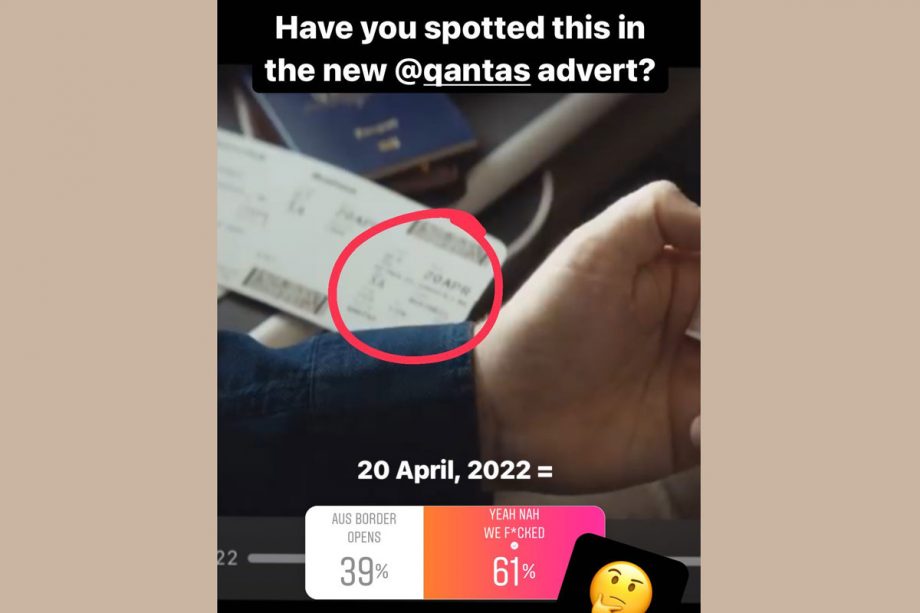 The idea being? The boarding pass in the video appears to be dated the 20th of April 2022. So could that be when our borders open?

On Youtube, not many people thought borders would open any time soon.

One clever commenter quipped: “Nice of Qantas to release their 2025 advertisements ahead of time.”

Another wrote: “Never thought i’d see the day we would collectively be looking forward to eating bland food in small confined spaces.”

Qantas itself has said international flights to the US and UK could return by December 2021.

According to news.com.au, Qantas expects to resume international travel by Christmas, with Singapore, the United States, Japan, United Kingdom and Canada among the first overseas destinations it will fly to.

This all depends on the Government opening the borders, which depends on, to a great degree, Australia’s vaccine rollout hitting key targets.

Australia’s current goal is for 80 per cent of adults to be fully vaccinated by December.

Countries with high vaccination rates and low Covid risk, like the UK, North America and parts of Asia, will be Qantas’ first priority for international travel.

News.com.au reports that flights to riskier destinations with low levels of vaccination (think: Bali, Phuket, Bangkok, Manila, Ho Chi Minh City and Johannesburg), “will be pushed out to at least April 2022.”

Qantas chief executive officer Alan Joyce has said: “The prospect of flying overseas might feel a long way off, especially with New South Wales and Victoria in lockdown, but the current pace of the vaccine rollout means we should have a lot more freedom in a few months’ time.”

“It’s obviously up to government exactly how and when our international borders re-open, but with Australia on track to meet the 80 per cent trigger agreed by national cabinet by the end of the year, we need to plan ahead for what is a complex restart process.”

Maybe Immanuel wasn’t so far off the money with his April prediction, after all?