John Legend is a style icon.

The 42-year-old singer isn’t just only one of the most talented musicians alive today: a vocalist, songwriter, record producer, multi-instrumentalist, producer and EGOT (i.e. an Emmy, Grammy, Oscar and Tony winner)… But he’s also one of the most fashionable male celebrities on the planet, serving up style inspiration even more impressive than his vocal range.

But the only thing more stacked than his musical trophy cabinet is his watch collection. Legend loves high-end watches, and has particularly good taste in them, too – with all sorts of pieces from brands like Bulgari, Rolex and OMEGA filling his safe.

His favourite watch brand, however, is Audemars Piguet. More specifically, he loves the Royal Oak – he owns a few of them. But his absolute favourite watch is his yellow gold Royal Oak Chronograph with a white dial: it’s his ‘beater’ watch, i.e. the watch you wear day-to-day regardless of the activity and don’t stress about getting damaged. 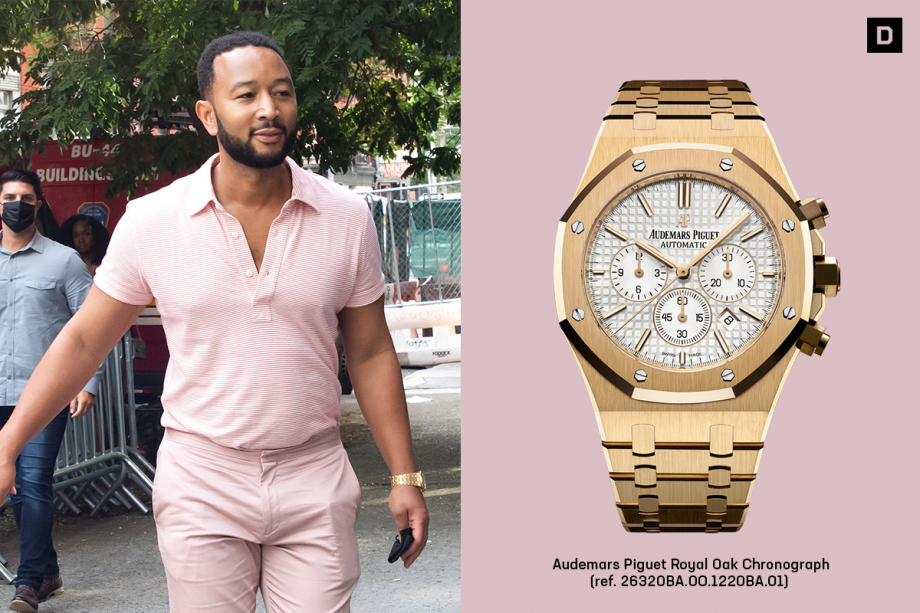 Despite hanging out with a lot of rappers, he’s never directly referenced his AP in a song of his. Images: Getty / Audemars Piguet

That the man uses a hefty gold watch worth in excess of $140,000 as his beater says a lot about how successful he is… Or perhaps the size of his cojones. Must be nice.

Weighing in at 41mm and powered by the Audemars Piguet calibre 2385, this three-counter chronograph rendition of Switzerland’s most famous luxury sports watch boasts a rather unique silvery-white “Grande Tapisserie” dial, and both a case and integrated bracelet made out of brushed 18ct yellow gold.

Legend actually owns a very similar reference, also in yellow gold, but with a black dial – the ref. 26320OR.OO.1220OR.01. There’s something about Royal Oaks that really inspires compulsive collecting: Kevin Hart does it too (although Hart has almost a dozen of the things…)

He wears this white dial number more than any other watch in his collection, however. No matter the weather, no matter the outfit, you can be sure that it’s the first timepiece he’ll reach for. He was spotted wearing it twice last week – in the photo above and in the photo below, where he’s holding the hot dog – as well as during his family holiday in Portofino earlier this year. 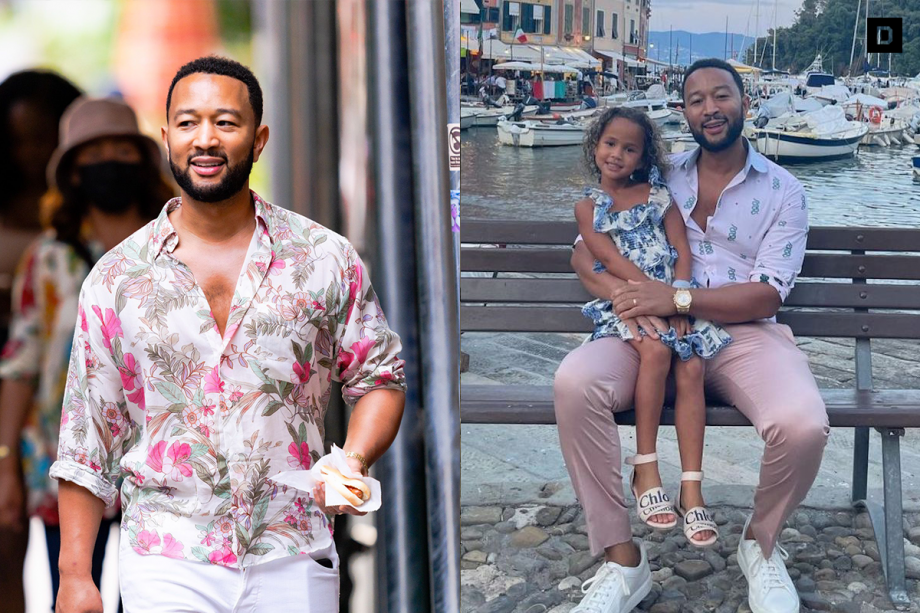 Nothing quite says ‘baller’ like unbuttoning your silk shirt and getting stuck into a glizzy with a whopping big gold watch on. Images: Getty / @johnlegend

Of course, to fuel his expensive watch habit, Legend works hard. Aside from being a coach on the American version of the popular TV talent show The Voice, Legend’s other big hustle has been building his own wine brand, Legend Vineyard Exclusive, in collaboration with acclaimed Napa Valley winery Raymond Vineyards.

He’s not the only celebrity who’s entered the wine game, either: check out Formula One driver (and true-blue Aussie legend) Daniel Ricciardo’s tasty new collaboration with St Hugo.