Just a heads up: short men don’t like height jokes. And fair enough: no one likes being made fun of for something they can’t control.

But in a blow to all the cruel, joke-happy tall people of the world, one man on Reddit has shared an anecdote that appears to disprove the tired old whinge that women never date men shorter than them.

The Reddit user, u/LittleBear42, wrote in the r/Tinder community: “Just matched with this tall Amazonian beauty. I’m 5’7” wish me luck.” 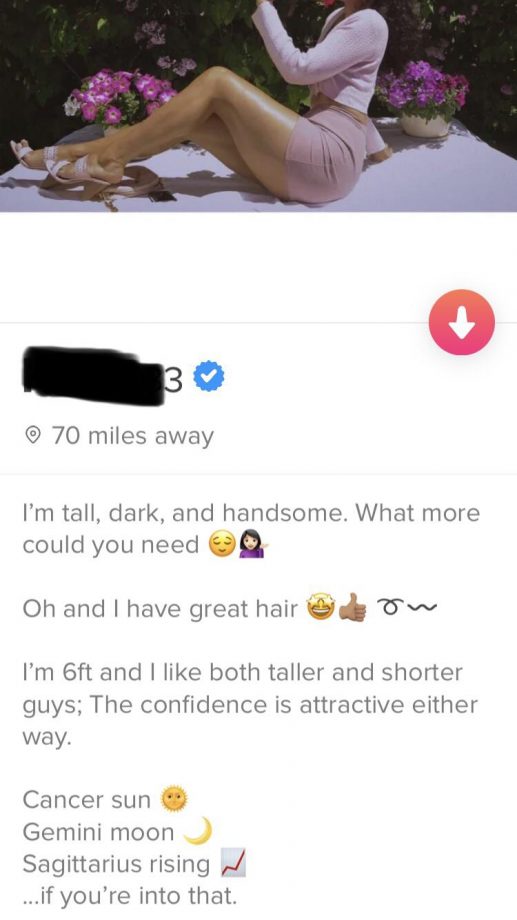 His match’s profile appears to provide hope for short men everywhere: not everyone will write you off for being short.

Her profile reads: “I’m tall, dark and handsome. What more could you need? Oh and I have great hair.”

“I’m 6ft and I like both taller and shorter guys; the confidence is attractive either way.”

The first thing the r/Tinder community picked up on was the joke in her profile (which many people missed): “Damn, this many people never heard the cliche how fortune tellers in movies always predict that ‘you’ll meet a tall, dark, handsome stranger’? This is obviously a joke referring to that.”

“Everyone on here talking about her describing herself as handsome. Relax, it’s part of the saying she is using as a joke.”

Other users shared their own height difference stories.

One man, who claimed to be 5’4″, wrote: “It’s rough out there for a shrimp lol gotta have much better game than all my tall friends and still don’t get laid as much.”

Others said dating is more about your attitude. One Reddit user claimed he dated someone who was 6’3″ while he was 5’4″ and it “was a lot of fun.”

Another provided another revelation: “I’m 5’9” so not really that short but I used to chat up tall girls exclusively back in my single years. The taller the better. I figured most girls preferred to be the shorter one but tall girls don’t always have that luxury. Plus any guy shorter than her would also be either too intimidated or just figure the same thing as me, so they wouldn’t bother. So I was really only in competition with myself.”

In response to this, another Reddit user wrote: “As a 6’ tall women, yes please talk to us!”

RELATED: How To Dress Stylishly When You’re Short

“Exactly! Personally, I never cared about a man’s height. If he was funny and confident, he was gorgeous,” commented another.

“Same here!! I’m 5’8” so a lot of times the guy is about as tall as me, especially if I’m in heels. Makes no difference to me as long as they’re confident about it.”

There’s also the matter of sideways looks from others. To which one user says: f*ck em.

Finally, one user provided an ice-breaker for any short dudes lost for an opening line on a dating app: “I’m 5’7. Basketball court ____ 7pm. Loser buys drinks.”