Australia is often accused of having no national cuisine. A rude, though not baseless, charge.

But…though we might not have Paella, we do have sausage sandwiches – a criminally overlooked dish among foodies and Michelin Guide writers, but loved by the Aussie public.

Though they suffer from the stereotype they were probably cooked up by a hungover volunteer, who may or may not have scratched their derriere in excess of 50 times during their shift, sausage sandwiches are one of the closest things to a national food we have.

Whether at Bunnings or your local sport’s club, they are a Sunday morning institution, up there with France’s “coffee and a cigarette” and Spain’s “bottom of the pan Paella” (both in terms of culture and carcinogens).

Don’t believe me? Check out the 1,507 Instagram posts containing the ‘bunningssausage’ hashtag, with heartfelt captions like, “Be still my heart” and “Welcome back, I’ve missed you” and “Nothing quite beats a @bunnings Sausage Sizzle!”

Not enough evidence for you? There are 3,737 more Instagram posts with the hashtag ‘bunnings sausage sizzle.’

Oh, and who needs regaetton when you’ve got music videos filmed in a Bunnings carpark for sozzie sizzle Sunday?

Much like Spaniards love to debate the merits of each region’s dishes, and how best to cook things (should there be onion in your tortilla or is that treason?), we, too, have sophisticated debates over the best way to dress a Bunnings sausage.

Where, exactly, the sausage should be placed in relation to the onion, regularly provides Australians with food for thought – as this Instagram post from 2018 attests.

“Serious news from back home – 🇦🇺 Controversy surrounding the classic Bunnings sausage sizzle – man slipped on a stray onion and now they must serve the sausage above the onion.”

“Should onions be on top or bottom of the snag?”

In response to the post, one user wrote: “Onions on the bottom is criminal.”

That’s before we even get into the whole tomato vs. BBQ sauce debate.

Also, much as many of the dishes sought out by foodies overseas feature the less commonly consumed parts of animals, cheap snags aren’t exactly known for being prime cuts of meat, either.

Before you go calling a Michelin star judging panel and directing them to your local Bunnings, just wait one second though.

“Haha. As much as I’m the biggest fan of a snag sauso, that’s a pretty long bow. I think for me, tapas is a variety of small plates which to pick at and graze on.”

Executive Sous Chef at Hearth, Danny Feng, however, tells DMARGE an Australian sausage sizzle could, one day, earn a Michelin star – much in the same way street food in places like Singapore have in recent years.

“I think that using fine native ingredients, incorporating unique flavour elements and cooking techniques could be the key to get there.” 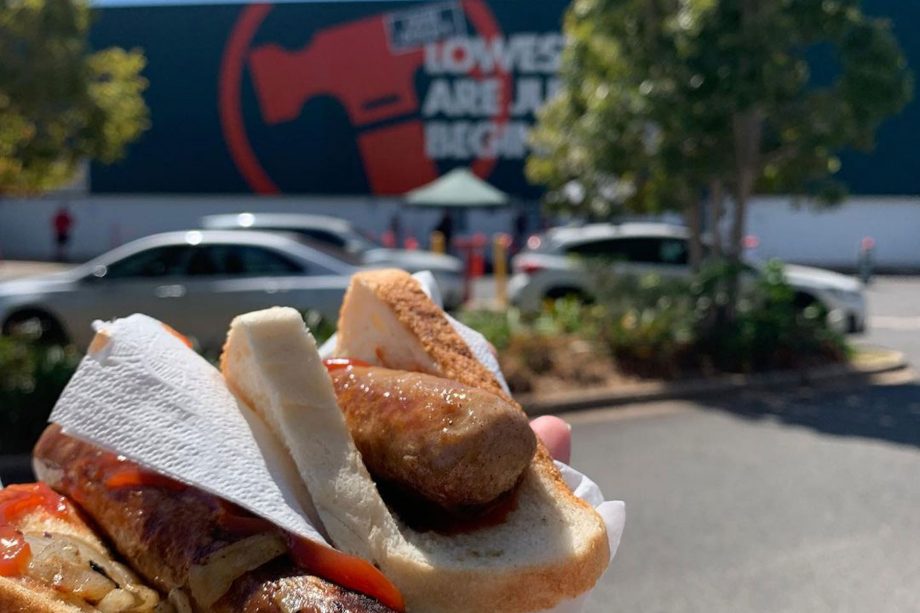 Andy adds that ‘Australian tapas’ and Spanish tapas have another thing in common: “hunting down the goods with your nose.”

“The first thing you notice with a Bunning’s sausage sizzle is the smell of a mixture between heavily charred onions melting away on the hotplate and the waft of pork or beef snags, caramelising away. I’m all about it. The same can be said about wandering the streets of Spain, it’s all about following your nose!”

Andy also says that though Australia is not known for having one defined food culture – instead, being full of a rich variety of multicultural culinary offerings – we do actually have a national cuisine “in the form of our Australian Indigenous ingredients.”

“Sure they may not be as popular worldwide as a bowl of spag bol in Italy or the sushi roll in Japan – but they’re unique, delicious and native to our land and that should be celebrated.”

Put that fork on it and eat it, food snobs. Who needs San Sebastian or Valencia when you’ve got your local Bunnings?