Conor McGregor’s not the sort of man to let a leg injury – or extremely fragile high-end watch – get in the way of his exercise regime.

The 33-year-old MMA champ and ‘face of the fight game’ caused wincing around the world when he got his left tibia (that’s your lower leg bone) shattered by American rival Dustin Poirier at UFC 264 earlier in July. The loss and the injury haven’t left him too stumped, however, with ‘The Notorious’ quick to return to the gym.

Except now he’s causing wincing for a whole other reason: his choice of workout watch. Yesterday, McGregor posted some photos and videos of him working out, his leg still in a ‘moon boot’, wearing his Jacob & Co. Astronomia Tourbillon Casino, worth around AU$1 million. 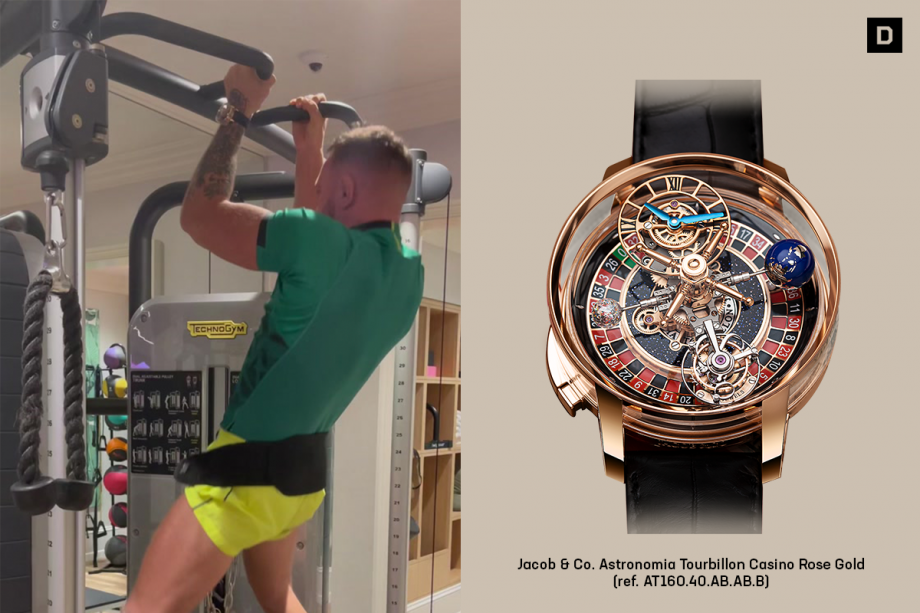 The flashy watch is but one of a number of Jacob & Co. pieces McGregor has in his collection, the brash fighter a bit fan of the Swiss brand’s highly complex pieces of haute horlogerie. It’s not even the only Astronomia he owns…

Weighing in at 47mm wide and 24mm thick, the Astronomia Tourbillon Casino – as the name implies – features a fully functional roulette wheel, above which a rotating armature suspends the actual watch face, the double-axis tourbillon movement, a magnesium globe of the earth and a 288-facet diamond.

While the watch is housed in thick sapphire crystal, it’s clearly not designed to withstand the rigours of an MMA fighter’s workout. It’s a piece of art, not a G-SHOCK.

McGregor’s got some serious cojones working out with this piece on his wrist. Or maybe he just doesn’t care. He can afford another one.

Watch some of Conor McGregor’s most intense workouts below