Ever tried jump-starting a Tesla? That’s not the set-up for some anti-EV joke, by the way. Teslas – as well as some other electric cars – are totally capable of being jump-started, as well as jump-starting other cars (although Tesla strongly counsels against it).

How’s that possible? Well, it’s because Teslas have a standard 12-volt car battery just like any other internal combustion engine vehicle. It’s a somewhat archaic piece of technology in what’s otherwise an incredibly high-tech car, but there you are.

But Elon Musk wants to change that. The maverick Tesla CEO and crypto fanboy has revealed a desire to start shipping lithium-ion 12-volt batteries instead of lead-acid batteries in his entry-level Model 3 and Model Ys going forward, a move that could spark a ripple effect throughout the auto industry.

Musk explained on Twitter that the move wouldn’t just be good for consumers, but it would be “preferable for Tesla too, as they last so long. Unlike other makers of cars, our goal is not to profit from service. [The] best service is not needing service in the first place.”

Shots fired, but big talk considering how hard Tesla make it for customers trying to service their own cars…

RELATED: Man’s Nightmare Tesla Story Could Be A Worrying Sign Of Things To Come In The Auto Industry 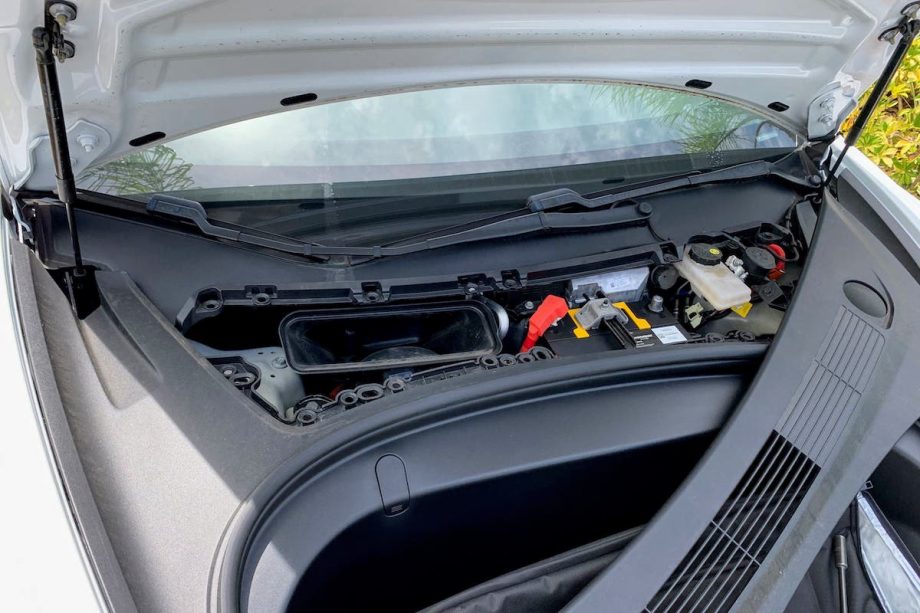 The 12-volt battery location on a Tesla Model 3. You need to remove some plastic trim to access the battery, as well as pop the ‘frunk’, which can be hard if the car’s completely dead… Image: CleanTechnica

Tesla’s other, more ‘premium’ models, the Model S and Model X, already use lithium-ion 12-volt batteries. Indeed, the main battery packs of all Tesla cars are lithium-ion. Bringing the tech to its entry-level models, however, is a big move. But what’s the difference between lithium-ion and lead-acid?

As powertrain provider Cummins relates, there are three main differences between the two: cost, energy/range, and charging. Lead-acid batteries are significantly cheaper up-front, and are “available in large quantities with little worries relating to security of the supply and in a variety of off the shelf pack sizes”. But lithium-ion batteries are more energy-dense (i.e. they take up less volume for the same capacity), which means they have a longer range, and they’re much quicker to charge.

Essentially, lead-acid batteries are a tried-and-true technology, but lithium-ion is a better choice in the long term, especially for Tesla vehicles. As the high-voltage main battery uses lithium-ion chemistry as well, using a low-voltage (i.e. 12-volt starter battery) cell that matches its life cycle and chemistry of the main pack could also reduce the need to replace the 12-volt cell over the main battery’s lifespan, vehicle teardown expert Sandy Munro related during an interview with Musk.

If, by backing lithium-ion 12-volt batteries, Tesla can help bring down their price, and/or encourage other auto makers start to back the technology – it could be a game-changer for both EVs and ICE vehicles alike.

“Musk is pushing hard for lithium-ion as the future of electric vehicles and clean energy,” Inverse relates.

“Last week, he declared that the technology alone would be enough to transition the world onto sustainable energy… Lead-acid may have made sense in an earlier market, but as Tesla aims to rapidly boost its lithium-ion production, the market is shifting.”

The better and more efficient batteries become, the quicker we’ll see green technologies such as EVs and renewable energy generation take hold. Musk pushing for lithium-ion could spur progress forward – or, at the very least, make it so that cars don’t need to be jump-started as often. Win-win.