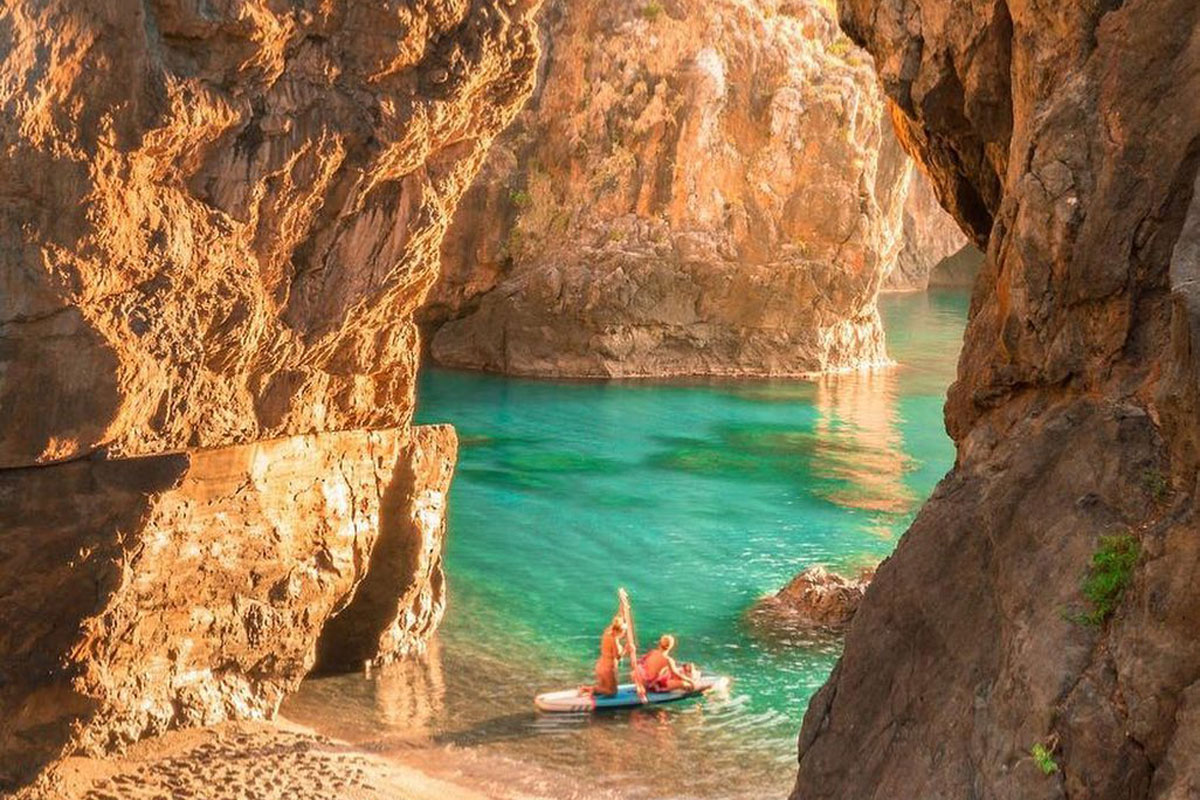 When we’re all vaccinated and back to normal, will 2020 and 2021 just seem like a bad dream? That’s what many anxious travellers around the globe are crossing their fingers for (and praying to The Gods Of Neck Pillows will be the case).

Though our dilemma pales in relation to the difficulties currently being faced by those with loved ones overseas, or those in countries ill-equipped to deal with the pandemic, not being able to travel has Australians accustomed to frequent flying frothing with even greater FOMO than usual.

Enter: the following photo, which DMARGE recently found on Instagram, of a world-famous beach known for the sun’s rays entering its doors on sunset.

Dialling up your wanderlust to 11, this image, taken in Italy’s Arcomagno beach, in the town of San Nicola Arcella (which is part of the Calabria region, in Italy’s southern peninsula, separated from Sicily by the Strait of Messina), shows a couple heading out to sea on a stand-up paddleboard.

They appear to be doing so during some heavenly golden hour of light.

Underneath @whereinitaly’s post, Instagram users from all around the world commented, expressing how they missed travelling, and their plans to visit Arcomagno (either for the first time, or again).

“Once again to the south.”

“I never get tired of admiring the incredible beauties of Mother Nature. Even through videos. It fills the eyes and the soul. Wonders.”

Various other users tagged their friends.

This is not an isolated incident. Under other images of Arcomagno, like the one below, users keep commenting along similar themes.

“Just the summer everyone is craving,” one user wrote underneath the above photo, taken by @carlo_audino and reposted by @ig_calabria.

The gentle lapping of the crystal blue Ionian and Tyrrhenian Seas have entranced travellers for decades. But now that travelling to Italy’s boot is off-limits to Australians (who are currently banned by their own government from travelling overseas) their allure, and the allure of similarly far-flung places, has only increased.

The eye-halting photos you can see above, then, provide a timely reminder of what we can all look forward to again once we all get vaccinated and back to normal, whenever that may be.

The topic of how many Australians need to be vaccinated (or had the chance to get vaccinated) before international travel resumes to any significant degree down under is still being hotly debated. You can read more about that here.