Think 50 Shades Of Grey is masochistic? You should see Australians’ relationship with rockpools. Though it might not be so obvious as toting a dodgy paperback everywhere you go (the standard move for many Aussies when the aforementioned book first came out in 2011), it’s still a ~flex~.

“Oh, you barely made it to work this morning with enough time to rub the sleep from your eyes? I swam 800 metres and have already deleted two flat whites.”

As DMARGE has reported numerous times over the last few months, Australia has pockets of coastal communities which are glued to their local watering holes in ways that would make the average Tinder commitment-phobe run for the hills.

Aside from the exostosis, this is positive, with this refreshing ritual bringing both physical and mental benefits – something we believe the following photo by ilana Sallick (and posted to Instagram on April the 26th) sums up nicely.

The image, taken at Coogeee’s Wylie’s Baths, shows a simple scene. But there is actually (we reckon) some serious social psychology behind it.

Given we are coming into the peak season for shivering cold dips (and short sunny days), we thought we’d take a browse through the Instagram geotags of some of Australia’s most popular rock pools (including Wylie’s), interview a bunch of the people whose photos appear at the top, and ask what their relationship status is with rock pools – and how they believe beach-going is different in Australia compared to Europe (which, as we recently reported, Australians are often guilty of over glamorising).

Caroline from Places We Swim, whose Instagram photos rank highly for everywhere from Victoria’s The Pillars to NSW’s Clovelly and Bushranger’s Bay, told DMARGE: “Swimming is part of our daily lives and psyche in Australia.”

“I’m sure it’s to do with the landscape and climate. But we are very connected to swimming in Australia. We also learn to swim much younger than in most countries.”

“With regard to ocean pools, they almost exclusively exist in NSW, and there is over 100 dotted down the coast. NSW has to be one of the friendliest places to swim in the world.”

Another part of the attraction is that it’s a challenge: you can’t just rock up and score the perfect beach day or beach photo. It’s an art of reading the wind, swell, weather and tide, and when it pays off it’s a lot more satisfying than simply dropping by your local chlorinated swim (or bridge) club.

Reading the conditions makes you feel more connected to nature. And you don’t even need to be an ultra-fit surfer to learn. Like golf, it just takes practice. The following Instagram post by Places We Swim shows this mildly neurotic side to rock pool swimming (and photography) perfectly.

“Before we moved to Manly (from Bondi) we didn’t realise we would enjoy the harbour beaches so much,” Places We Swim captioned the above photo. “There’s a calmness to them that is different to the ocean beaches.”

“But the best part about Manly is that you get both options. And when the wind is on one side of the peninsula, you can almost be certain the other side is protected. It blows our mind that you get this right in the city. We’re having a real Delwood lovefest at the moment.”

When DMARGE spoke to photographer ilana Sallick (@thelensandi), whose image of Coogee’s Wylie’s Baths inspired us to start thinking about all this in the first place, she told us that – although European beaches are “definitely thought of as photogenic” – she thinks a big part of why we over glamorise Europe (and potentially undervalue our own beach culture) “is a result of photographers, like Slim Aarons, who have showcased the rich and famous at play at private beach clubs.”

“These old photographs conjure up feelings of a romantic, worldly and glamorous lifestyle that is so different to what we have in Australia – or who we are…”

Australia is a [different] country with a laid back lifestyle,” ilana added. “We love the outdoors. I think Australia’s overall warmer climate helps as we generally spend more time outdoors, at the beach than in Europe. We go to the beach to have fun in the water, and relax on the sand.”

“I think it also helps in Australia that a lot of our beaches are surrounded by nature, full of soft white sand, Compared to Europe’s pebbled beaches that are often sandwiched between old towns and buildings.”

Pip Edwards, Australian fashion designer and co-founder of sportswear label P.E Nation (who has been called “one of the most influential figures in the Australian fashion industry” and whose photos can also be seen at the top of the Wylie’s Bath Instagram geotag page), told DMARGE: “We absolutely love a beach rock pool. We work with the natural coastline. All our coastal beaches have their own rock/ocean pools. Bondi, Tama, and Wylie’s.”

“We experience massive high and low tides and powerful surfing waves, so having the option of an ocean pool is awesome to still get in the water, even if you aren’t a strong ocean swimmer. It encourages fitness whatever your level.”

“It also encourages connection to the landscape. Our coastline is our lifeblood. It impacts our energy and outlook and for me, is the biggest source of inspiration. And to breathe and bathe on the concrete whilst being close to the water and beach is everything.”

DMARGE also spoke to photographer Rachael Kane, who has experience taking photos in Italy’s Capri and Amalfi Coast as well as Sydney’s Eastern and Northern beaches. 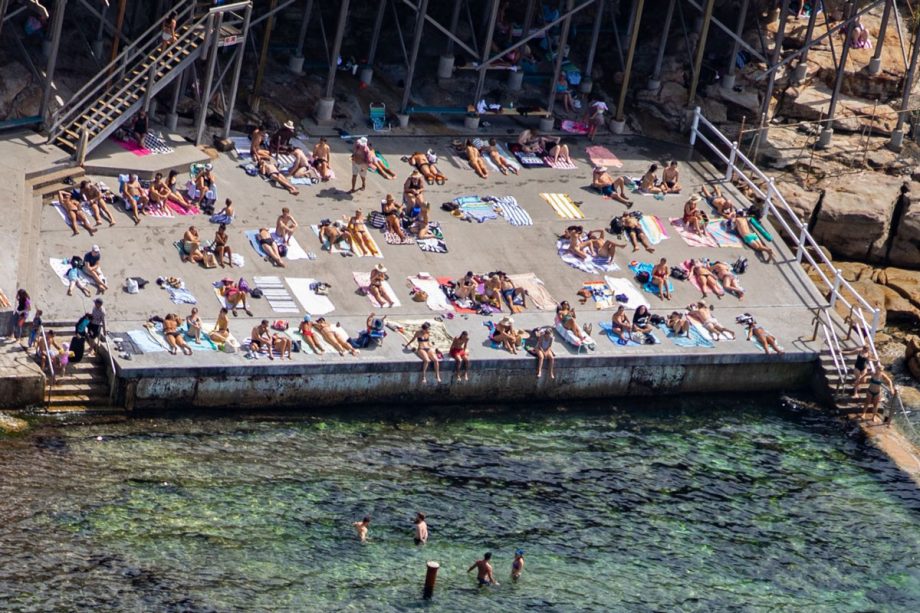 Rachael told us there may actually be more to justify Europe’s classy stereotype than we have been giving it credit for: “I personally find photographing the beaches in Europe a different experience to Australia, and I adore the Australian coastline. The European coastlines from Cannes to Corfu are enchanting, there is a depth of colour and contrast, there is height and drama, and there is no getting around it there is a level of sophistication and style that Australian beaches just don’t have, and oh boy is it beautiful to photograph.”

“I think it is a magic cocktail of; people at the beach are all on holidays, they are walking to the beach, they dress to impress – no matter if you are a movie star or a mechanic. Anchored off the calm Mediterranean beaches are glamourous super yachts. You as a participant absorb the beauty, you believe in it. No sand no worries, they happily lie on pebbles all day to unashamedly worship the sun, or even better a sun lounge on the pebbles with a personal waiter.”

RELATED: ‘A Place To See & Be Seen’: Incredible Photo Shows Why Every Traveller Should Visit Capri Once 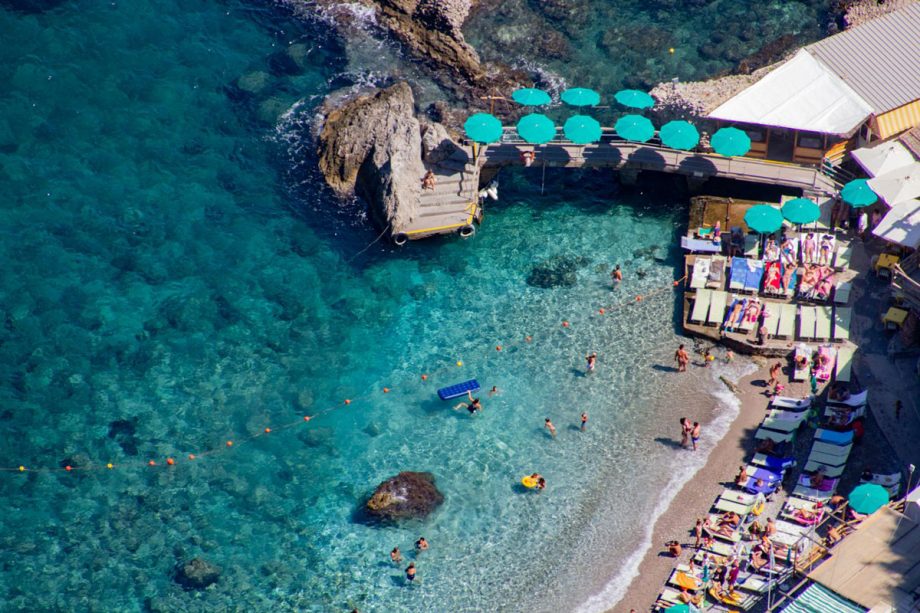 “All these elements add a depth to the images you take. I know many Australians who live in beachside suburbs but only ‘go to the beach’ when they are on holidays in Europe.”

As for Australia and rockpools, Rachael told us: “I find it interesting that many of the iconic Australian East Coast rockpools were built during the Great Depression as government initiatives for the unemployed men, and even today these rockpools and baths are still embraced and very loved. I wish there were more along our dangerous coastline.”

“You have to imagine back in the 1930s that not everyone could swim well, and certainly the rugged surf pounding coastline would have been daunting, so it seems almost like Australia’s first step was to tame small corners of our oceans and seas until we understood the beast better.” 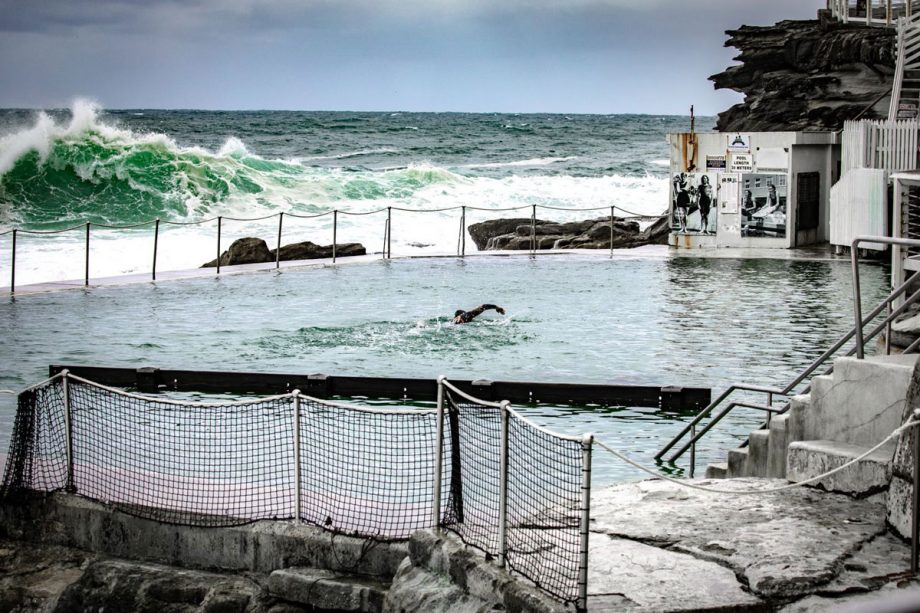 “Even recently when we had the high winter swells bashing Sydney’s coastline some of the ocean pools were a place of calm that allowed the dedicated daily winter swimmers to pursue their pleasure in safety.”

Photographer and videographer Chris Mohen shared his thoughts about rockpools with DMARGE too. “My experience with rockpools is pretty expensive. Since I began shooting 12 years ago the main go-to for any outside shoot would always at least have a rockpool as an option. We have Wylie’s baths in Coogee, which has been adapted from the natural Rockpool to make a place safe and easy to swim, or simply hang out.”

“You see the regulars there from the time the gates open in the morning to the time they shut at the end of the day. They’re using the pool as their place, their home, their pool. It’s a form of addiction, but also they use it as their routine for the day. This is pretty similar across the country, as close as Bronte with the southern rockpool and as far away as Injidup natural spa in WA. Injidup is a little harder to get to but still spectacular and visited daily by locals and tourists alike.”

“The way that Australians have used the rock formations of the coastlines to create beautiful and safe swimming areas is pretty incredible. Some with facilities like Wylie’s in Coogee and others just down a dirt road like Injidup really shows to me how much variety there is in a natural or semi-natural rockpool and how much people need that place to clear the mind and start or end the day.”

“After travelling overseas quite extensively, especially to places like Nice in the south of France really shows that to me, the daily swim is pretty essential for humans of coastal areas and probably shows why people who live on the coast crave that morning or evening swim so much.”

“The rock pools in Nice may not be the same, but the essence of a daily swim and a bit of sun is not lost on the French, especially the old leatherbacks just like here.”

Finally, photographer Laura Reid told DMARGE, in her view, “for many coastal locations the ocean pool is like a European town centre, it is a meeting place.”

“During winter the water is usually warmer than the outdoor temperature (especially early in the morning).”