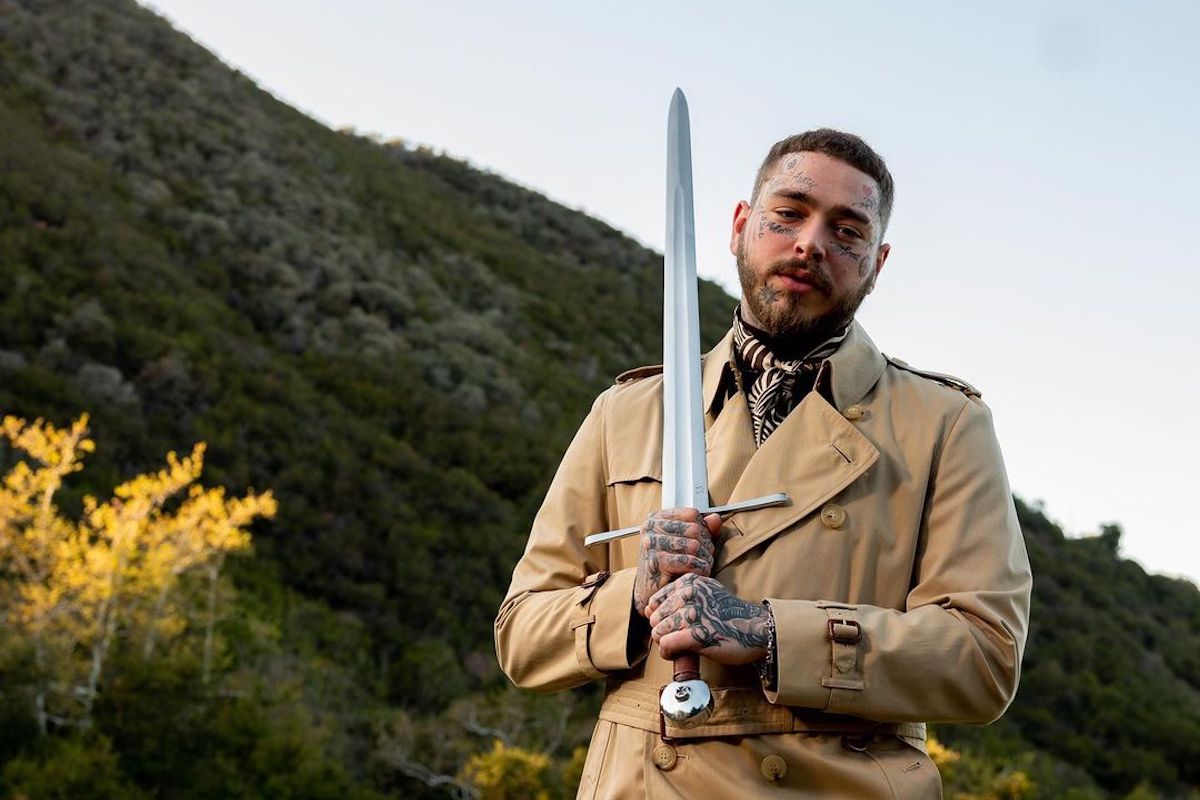 Post Malone might not be the first name on your lips when it comes to discussing male celebrity style icons. The notoriously grungy rapper/singer/songwriter is better known for his tapestry of elaborate tattoos as opposed to his dress sense.

But he’s actually evolved into a rather snappy dresser, especially as he’s got older. In particular, the Texan native has a real affinity (and knack for pulling off) rather Southern suits, bolo ties and cowboy hats, and he’s no stranger to a dapper leather jacket or a stylish watch.

His latest outfit, however, might be his best yet. Jumping on Instagram to announce that his highly successful French rosé, Maison No. 9, is now available in the UK, Malone (real name Austin Post) shared photos of himself looking exceedingly dapper in an Aquascutum trench coat, cream linen pants and what appear to be Clarks Wallabee moccasins, accessorising with a zebra print cravat… And a giant claymore sword.

The look’s amazing, and certainly puts any criticism that he’s some style slouch to bed, but why the sword? Well, the name Maison No. 9 is a reference to his favourite tarot card, the Nine of Swords. Plus you can’t get more Scottish than a claymore. Except maybe if he was wearing a kilt…

Trench coats, which first became popular as an alternative to the heavy greatcoats worn by British and French soldiers in the First World War and also saw service in the Second World War, have since become an important element of business attire: a way to defend against inclement weather whilst still looking stylish as hell.

In recent years, their popularity has somewhat declined – especially over the last sixteen months, too, with COVID dramatically changing how we all approach work as well as how we dress for work. It’s a shame because trench coats are a very easy way to introduce an element of formality or elegance to an ensemble. Case in point, Post Malone.

Maison No. 9 isn’t Post’s only side hustle. During the pandemic, he also branched out into selling PPE and hand sanitiser as well as launching a number of collaborative Crocs models.

2021 has seen him perform at a virtual concert for the 25th Anniversary of Pokémon celebration as well as at the 63rd Annual Grammy Awards, as well as record a feature for DJ Khaled’s twelfth studio album alongside rising rap superstars DaBaby, Megan Thee Stallion and Lil Baby. He’s also got an album in the works that we’re likely to see this year, too.