Swiss chronographs and German cars go together like apple strudel and ice cream. Indeed, the history of both modern watchmaking and motorsports are deeply intertwined: as performance cars have gotten faster and faster, the need for accurate timing has grown stronger and stronger. Both disciplines are ultra-competitive and demand only the best.

That’s why the partnership between Mercedes-AMG and IWC Schaffhausen makes so much sense. The former is the performance division of the world’s oldest and most-respected car maker; the latter, one of the most iconic, forward-thinking watch manufacturers on the planet. Both have a deep respect for tradition that’s matched only by their innovative drive… If you pardon the pun.

The two brands have been working together since 2004, and in that time, we’ve seen them collaborate on a number of horological collaborations – for example, the Ingenieur Automatic AMG GT Edition, the world’s first boron carbide watch. 2021 has seen the pair team up yet again, this time on a rather striking edition of IWC’s famous Pilot’s Watch Chronograph: a highly fitting canvas for such collaboration and perhaps the most handsome version of the chronograph yet devised. 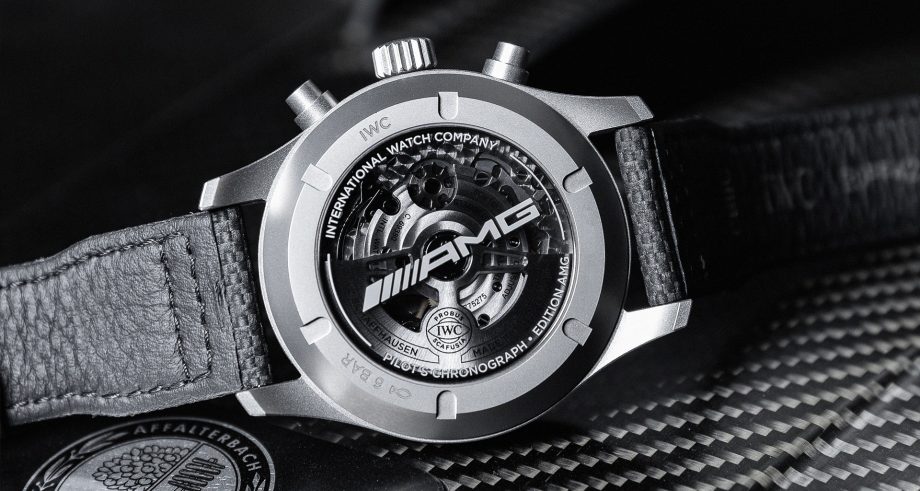 The watch features a tinted sapphire crystal case back emblazoned with a printed Mercedes-AMG logo.

The carbon fibre and titanium aren’t just for looks, however. Both materials are tough and light, the ideal attributes for a performance-focused timepiece. Combine that with the robust yet accurate 28,800vph IWC Calibre 69385 at its core, and you’ve got a watch that’s capable of keeping up with the bleeding edge of motorsport, even from within the cockpit.

Enter Maro Engel: long-time Mercedes-AMG factory driver and watch enthusiast. Engels recently made headlines around the globe for breaking the all-time production car lap record at the iconic Nürburgring Nordschleife in a Mercedes-AMG GT Black Series, blitzing ‘The Green Hell’ in an eye-watering 6:43.616, over 1.3 seconds faster than the previous record.

Engel doesn’t just put Mercedes’ cars through their paces, either – he’s also an unofficial watch tester of sorts. Engel’s worn the new Pilot’s Watch Chronograph Edition “AMG” whilst behind the wheel on numerous occasions, and has been impressed by the durability of its titanium and carbon fibre construction.

“I do put the watches under a lot of stress, not only the cars… being assured I have [such] high performance and reliability on my wrist is something very special… I bash my watch much more than I would like to,” he admitted during the global reveal of the Pilot’s Watch Chronograph Edition “AMG” whilst chatting with IWC CEO Christoph Grainger-Herr and AMG CEO Philipp Schiemer.

DMARGE had the chance to chat with Engel about his record-breaking Nürburgring lap, as well as about the Mercedes-AMG GT Black Series he set the time in.

“[The Nürburgring] is the most challenging track in the world because you have pretty much every imaginable type of corner… Slow, medium speed, high speed, incredibly high speed long stretches over crests, uphill, downhill, bank towards the inside, bank towards the outside, blind, short, long corners… Even the carousel, with the original concrete from 1927.”

“You also have what feels like a million different types of tarmac. Every year they resurface some parts, [but] that gives you a track which has so many different grip level changes… it’s just really, really challenging in that respect. Knowledge is key.”

Despite the brutal nature of the Nürburgring, during his record lap, Engel was hitting speeds as high as 310km/h – which is very close to the car’s top speed of 325km/h. 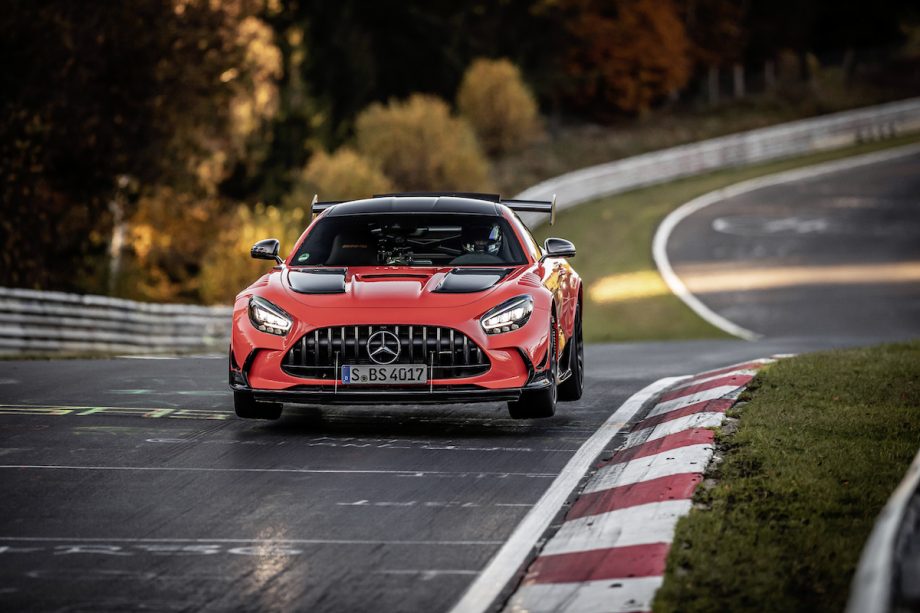 Engel gets some air on the Nordschleife. Image: Mercedes-AMG

Just as Engel is a versatile driver – who’s done everything from GT3 racing to V8 Supercars, Formula E and everything in-between – the Mercedes-AMG GT Black Series is a highly versatile car that offers a huge degree of tuning potential. So many things can be tweaked: the front splitter, the rear wing, the ride height, the camber, the traction control… It’s the car’s ability to be finely adjusted for specific conditions that Engel credits its world-beating speed to.

“I was given a few days to really find a good setup for myself with the car on the track…. [But] any customer can really replicate that and use that setup on the racetrack as well, or fine-tune it to his or her liking.”

“Driving styles are different; drivers will search for different things from a car… Even within the pro drivers, every driver will have his own preferences so it definitely makes a big difference… It gives you confidence… I think without that, it wouldn’t have been possible to achieve such a good lap time, especially in those conditions.”

One of the key adjustable features of the AMG GT Black Series is its unmistakable split rear wing. A huge swathe of carbon fibre, it’s this downforce-generating spoiler that inspired the carbon fibre face of the Pilot’s Watch Chronograph Edition “AMG”. Wings, pilot’s watches, carbon fibre… It all makes sense, doesn’t it?

Engel is set to return to the track for the 24 Hours of Nürburgring, arguably an even more intense test of not only the car but also the driver – and, of course, the Pilot’s Watch Chronograph Edition “AMG” he’ll be wearing on his wrist. We’re sure all three will rise to the occasion. If only we could time his laps with an IWC chronograph of our own…

To find out more about the new Pilot’s Watch Chronograph Edition “AMG” – as well as the exciting, ongoing collaboration between IWC Schaffhausen and Mercedes-AMG – head to IWC’s online boutique.