Building a bed in your car. How hard can it be? As I sat with ‘gorilla glue’ bubbling onto the floor and my carefully constructed joining efforts sliding all over the place, I was about to find out.

That’s not even the worst of it. The worst part about building a bed into the back of your car isn’t the chemical inhalation or even the paranoia about having a sleeping space full of tiny metal shavings.

The worst part was realising I’ll never be able to look at Airbnbs or hotels the same again. 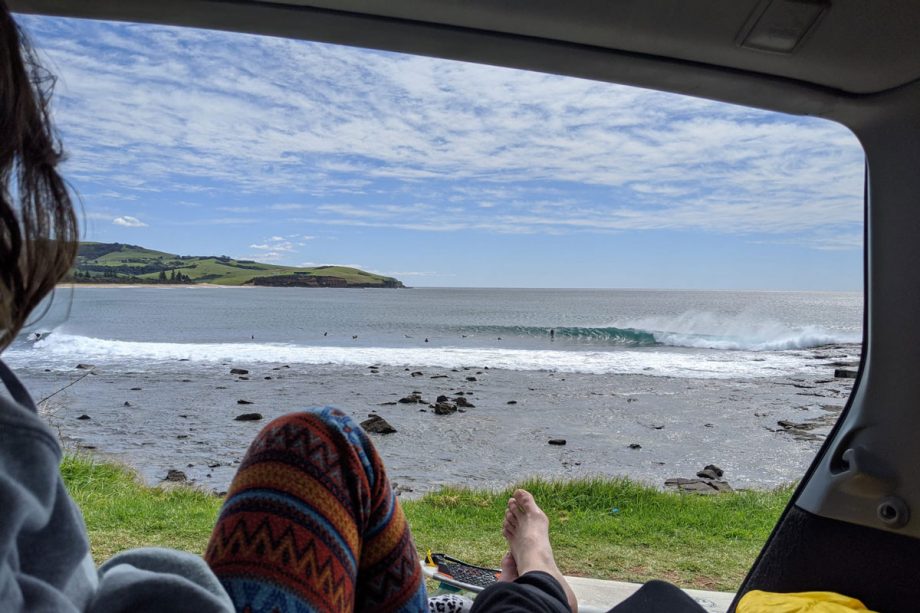 Why? At the risk of sounding like a Grey Nomad… the sense of freedom is intoxicating.

Here’s how I joined the rest of Australia, by building a bed in the back of my 2006 Subaru Forester, and everything I learned about becoming an Aussie travel cliché along the way.

This meant the basic design I chose (see: above) was still fraught with potential for f*ck ups (especially in my incapable hands).

I went with a design that involves a plywood base, with a hinge that allows you to flip the front third back when driving (and is propped up by two stilts when down). The whole bed is also supposed to be supported by three rectangular pieces of wood underneath, allowing for storage.

I abandoned the idea of storage space underneath when I realised how much glue (and how many screws) would be required, as well as hearing horror stories from friends whose beds had collapsed in the middle of the night and destroyed much-loved surfboards.

Instead, I chose to prop mine up with loose offcuts of wood (one in each corner). This also means when I park on an angle I can adjust my bed depending on the slope (the offcuts are of varying sizes). 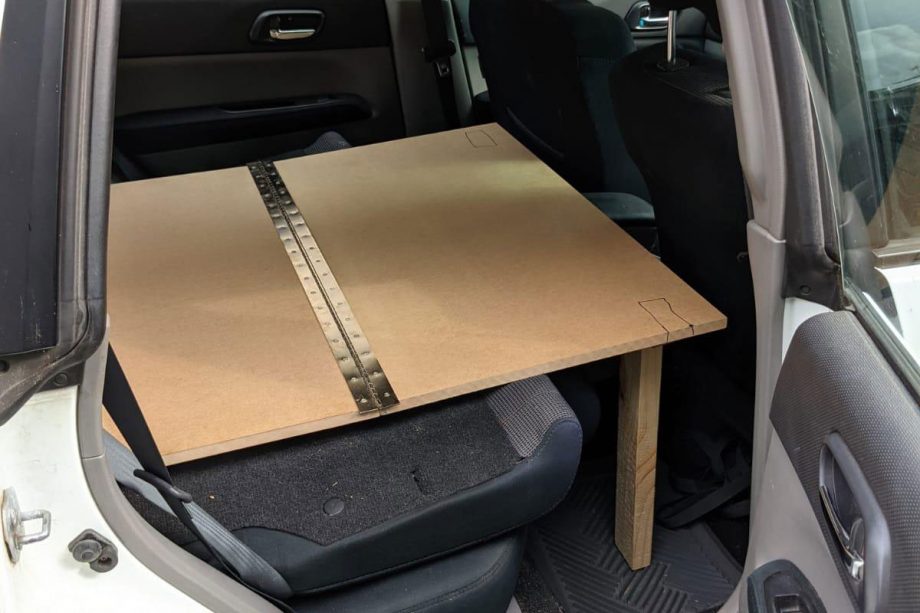 With this design, there is only an inch or so of storage space underneath my bed. This has its advantages and disadvantages. Benefits: I don’t have to worry about the thing falling apart when driving over speedbumps or on AWD terrain. Disadvantages: a lack of storage space; doesn’t look so cool on Instagram. 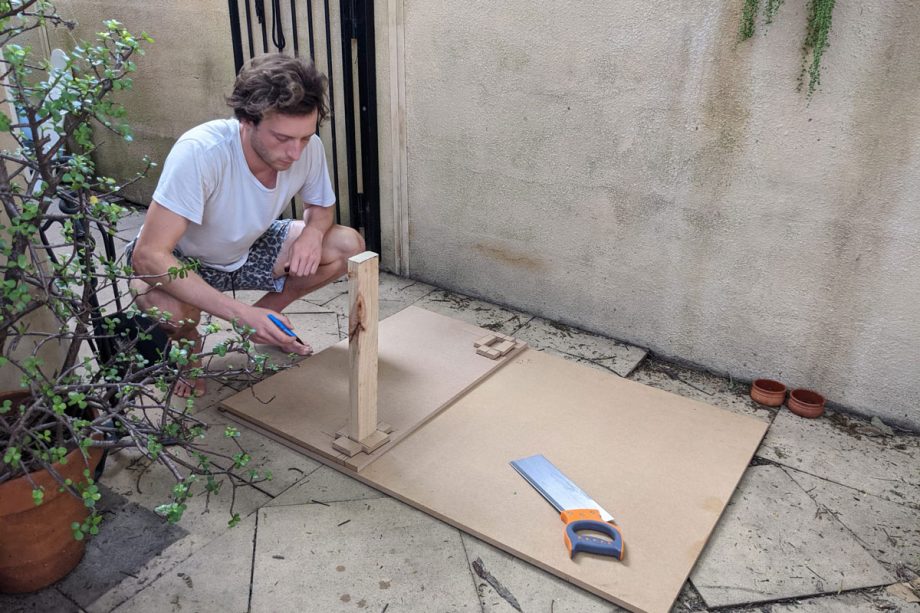 I discovered this when I left two pieces of offcut wood with a brick on top of them, glue between, and came back to find the top piece had slid three quarters the way off the bottom piece, despite them being left on (what appeared) a flat surface.

The more you know…

Testing the size of your mattress is crucial…

After consoling myself that at least my failed efforts to mimic the Youtube video above meant I would have plenty of headroom (seeing as the base of my bed would now be much closer to the floor) I then went and purchased a stupidly thick mattress.

After doing previous trips in the car without anything but camping mats to sleep on, my first trip in the car with this new setup, I realised what a mistake I’d made. Though the foam mattress I had bought was much more comfortable than a camping mat when prone (and though the wooden hinge set up meant for much more legroom than previous ‘bootleg’ missions), it was significantly worse for hanging out on during the day, as you were unable to sit up or rest lying back on your elbows.

This could all have been solved by buying a thinner mattress. 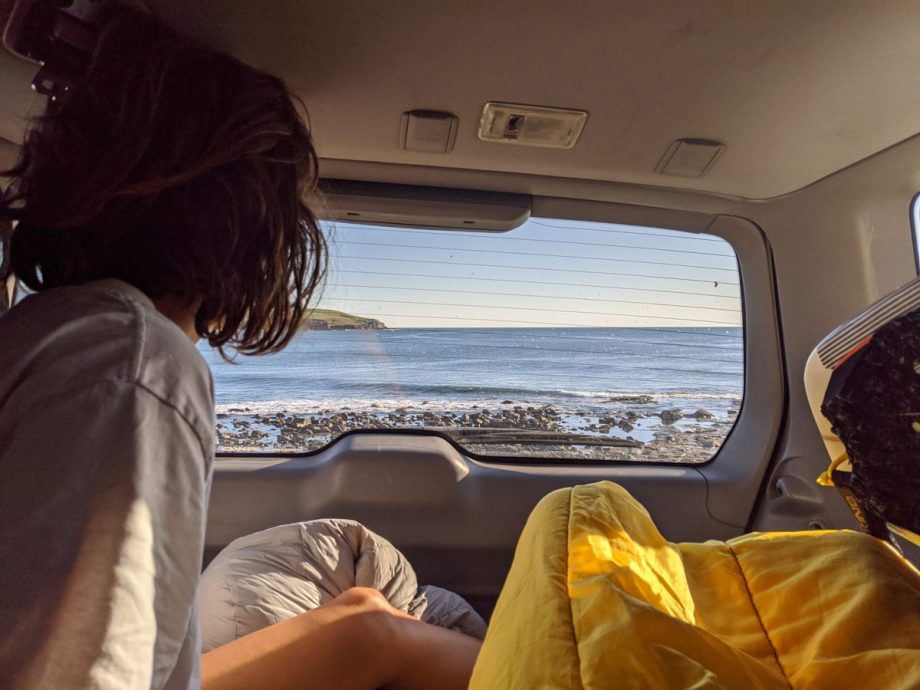 Image: DMARGE. Note: the innovative use of a surfboard as a curtain in the right-hand corner…

Despite all my whining, building a bed in the back of my car has been a revelation. Previously, I could only ever have afforded three or four long weekend trips a year (if that) while paying $400-500 or so per holiday (petrol, accommodation, food – it all adds up). Now I can go away pretty much every weekend, should I so desire.

Also: after experiencing the joy of waking up exactly where I want to be (as a surfer that’s typically next to some obscure stretch of sand) at daybreak and avoiding yet another drive to where I typically spend all day anyway, it’s hard to say I’ll ever go back to regularly staying in bricks and mortar accommodation 25 minutes away from the beach.

It gives you more time to see more places

From Bendalong and Jervis Bay to Werri and Kiama, I’ve seen more of Australia’s east coast in the last two months than in the last three years. All while still working a full-time job in Sydney.

It fixes your circadian rhythm

My current set-up has surfboards for curtains, a windshield shade for the windscreen, and no other light blockers. This means you wake up as the sun rises, and make the most of each day, naturally.

It also means when you wake up (in your curtain-endowed bedroom at home) to go to work on Monday, it feels like you’ve had a lie-in.

Cracking a window during the night is a smart idea

If you don’t want to destroy your phone with condensation, this is key.

You start to look at lavish van setups with disdain (or is it jealousy?) 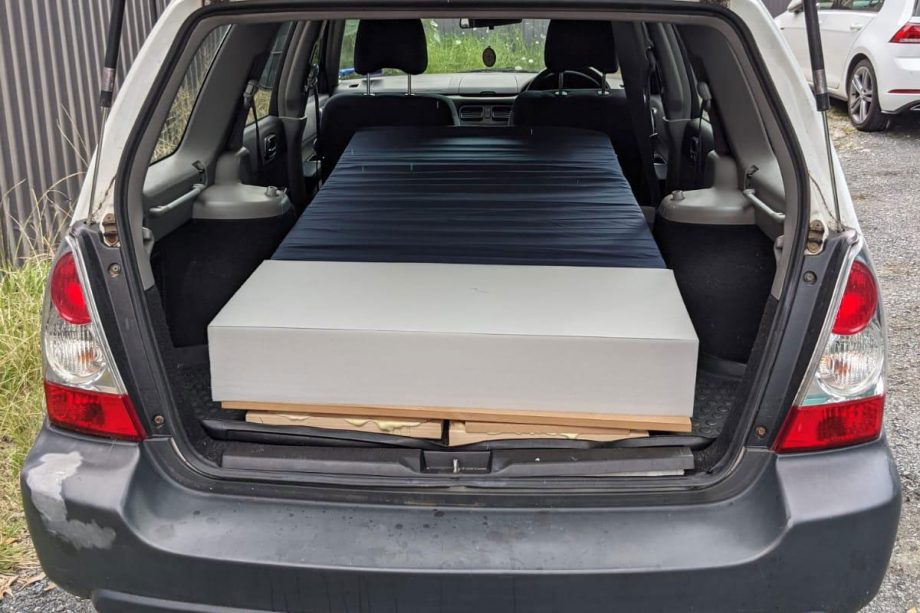 Now whenever I see someone in a Sprinter van or wood-panelled Hiace with fairy lights, I can’t help but smirk at how much time and effort they’ve gone to just to be in the same place as me, with my $150 Bunnings set up.

You gain a sense of gratitude

Living in your car, even temporarily, makes you think. As the ABC reports, there is a growing crisis of people being forced out of popular places like Byron Bay and living in their cars due to rental prices exploding.

Though it’s never a good look to go on about how slumming it ‘gave you some perspective’… sleeping somewhat rough did make me realise how much it would suck to live permanently in your car.

Though it’s not about me (and not about you either, if you are also fortunate enough to just be on holiday in your vehicle), if nothing else: it should keep your sense of self-pity in perspective if you ever get fined by a ranger.

I’d rather sleep in a car and buy a $4.50 strong oat milk flat white in the morning than sleep in a motel and feel obliged to drink their free instant coffee to make back the money I spent on accommodation…

You may initially mock the ‘vanlife’ motto and use the ‘homeiswhereyouparkit’ hashtag ironically, but soon enough you’ll be thinking… damn this really is a room with a view.

Now, where can I buy wood panels and fairy lights?