Stop and think about it. There are things we do, as a society, that will seem absurd in 100 years.

Take for instance the year 1900. Back then, not only were there were no fridges or microwaves, but snoop inside someone’s medicine cabinet and there would be heroin or mercury rather than Strepsils and Panadol.

Another thing that has changed is men’s swimwear standards.

Enter: the following photo from 1919. Though as myth-buster Snopes points out, it is trotted out every year claimed to be a “beauty contest” that shows how men’s body standards have changed (when in reality it’s just a photo that was taken in 1919), it does provide an insight into what men’s swimwear was like back then, somewhere in central Europe. 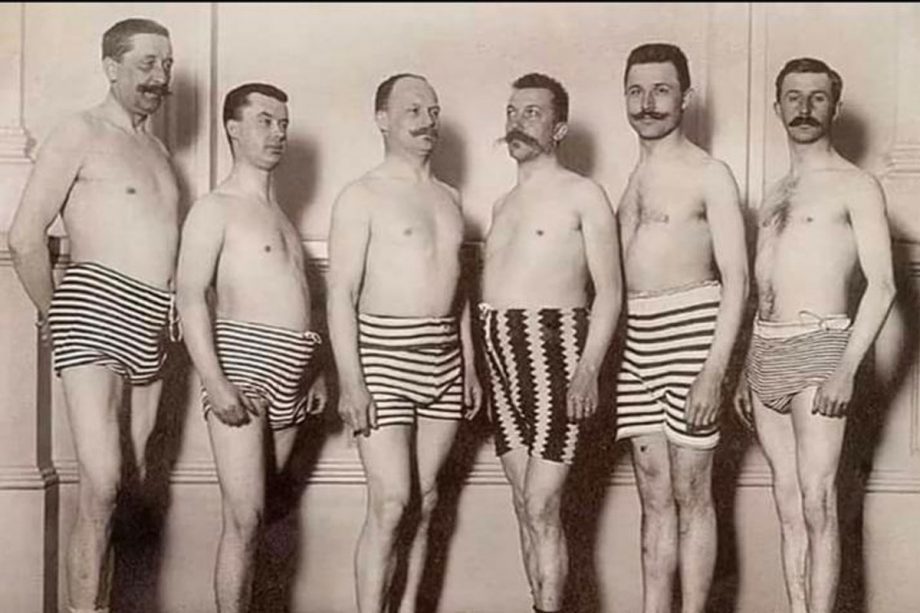 Compare that to the following photos of men taken in 2020 and 2021 at Sydney’s iconic Bondi Icebergs. What has changed?

For starters, the three quarter down the thigh, Speedo-material pants have been swept off the menu. Now men, it seems, have two options. Boardshorts made out of polyester or nylon. Or budgie smugglers.

RELATED: Coolest Boardshorts For Men In 2021

The great boardshorts vs. budgue smugglers debate has been simmering in Australia in recent times. As DMARGE reported last month, there is some debate over what swimwear is currently most fashionable. Some, like Bondi-based Parisian photographer  Amaury Tréguer (aka @morningbondi) wouldn’t be seen dead in Speedos.

Others disagree, calling the budgie smuggler not only an indispensable swimwear item, but one the French should really be embracing, lest they be left behind in the fashion stakes…

RELATED: 1948 Cannes Photo Proves France Has Lost Its Way When It Comes To Beach Fashion

What does the future hold? Only time (and tan lines) will tell.

Keep an eye on Bondi Icebergs for any burgeoning new trends.