Today, if the U.S. President needs to get anywhere, they’ll jump onboard Air Force One. Not the name of a specific aeroplane, but the air traffic call sign given to the aircraft carrying the President. It’s essentially a flying version of the White House.

Currently, two Boeing VC-25As are used for the Air Force One aircraft, themselves highly modified versions of Boeing 747-200B planes – complete with a full suite of telecommunications equipment, TVs, a press room and even a mile-high version of the Oval Office – although these are slated to be replaced by Boeing 747-8 in the near future.

The President even gets the luxury of Marine One, a fully-equipped helicopter to ferry them around whenever a plane isn’t essential.

But, such luxuries weren’t always afforded to whoever was in charge of the most powerful country in the world. Even though the first presidential aircraft came during Roosevelt’s administration, remaining in service from 1933 to 1939, Presidents have had to rely on other forms of transportation to get to and from inaugurations, campaign rallies and any other important meetings.

According to CNN Travel, the Presidents of previous years have often relied on train travel to ferry them around, and current incumbent Joe Biden is a keen advocate for the railway, racking up some “two million miles on Amtrak alone.”

But even that was luxurious compared to earlier Presidents’ trips. While it’s difficult to find concrete evidence, it can be safely assumed that George Washington, the first ever U.S. President, would travel around on horseback – it’s claimed he had a huge admiration for the noble steed, with one of his favourite horses being one called Nelson.

As CNN Travel relates, the first American-built steam-powered train came in 1829 with the debut of the Tom Thumb. While this particular locomotive didn’t enter full production, it was convincing enough for railroad companies to spring up and start laying some tracks. President Andrew Jackson then became the first in power to travel around by train.

But it wasn’t until 1862 and the administration of President Lincoln that train travel really took off, when he signed the Pacific Railroad Act, which paved the way for the first railway to link the west and east coasts of America. While Lincoln got to enjoy the railroads on a whistle-stop tour for the campaign that led to his electoral win, he never got to travel in The United States, a railroad car built especially for the President (essentially the rail faring version of Air Force One). At least, he didn’t travel in it alive, anyway. 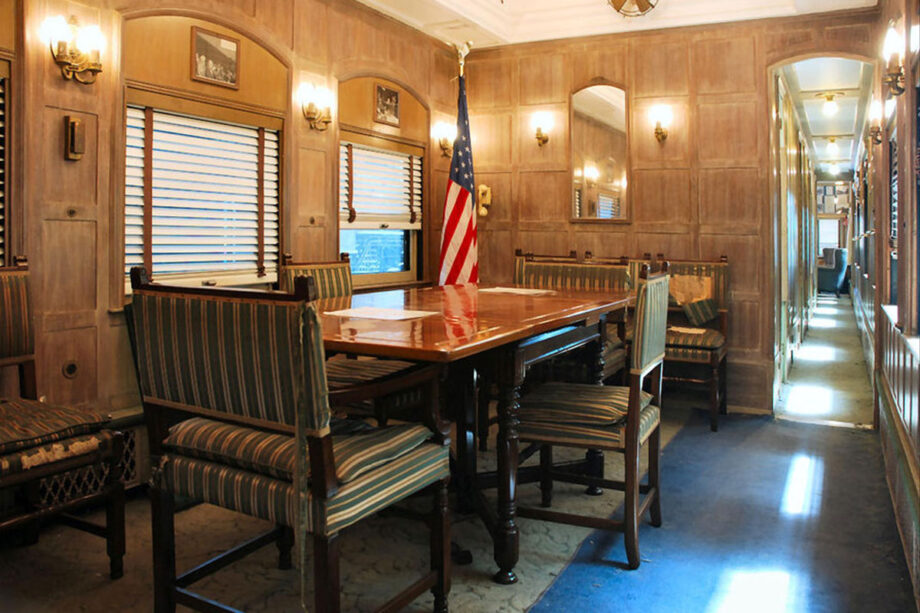 The railway proved to be invaluable to whoever took office during the 19th and 20th centuries, allowing them to attend events and give speeches to voters.

According to nps.gov, “U.S. Car No.1 is the only private coach railroad car specifically designed for the president of the United States. The Pullman Company built the Ferdinand Magellan in 1928, and refurbished the car and presented it (dubbed U.S. Car No.1) to President Franklin D. Roosevelt on December 18, 1942.”

“Both President Roosevelt and President Truman used the car extensively for state business, reelection campaigns, and personal trips. President Dwight D. Eisenhower briefly used U.S. Car No. 1 until air travel on Air Force I began to replace U.S. Car No. 1 as the preferred means of transport.”

“In 1941 in the midst of World War II, President Roosevelt consented to the urging of aides to have a private railcar reconfigured for his safety and comfort and that of future presidents. Originally built by the Pullman Company as the Ferdinand Magellan, the car was part of a fleet of six luxury cars, all named for famous explorers and available for private charter,” nps.gov explains.

“Armor-plated with 5/8-inch steel on the car’s roof, floor, and sides and fitted with three-inch thick windows and two escape hatches, the refurbished car weighed 285,000 pounds, double its original weight. U.S. Car No. 1 is the heaviest railcar ever built in the United States.”

“The 84-feet long, 15-feet high, and 10-feet wide train car, contains the presidential suite, two guest rooms, a dining room/conference room, and an observation lounge. Each room in the car has a telephone. The elimination of one of the usual five staterooms allowed for a spacious observation lounge, decorated with cream-colored woodwork, green carpeting and light brown, tufted wall covering resembling leather.”

“Between the observation lounge and the dining room are four bedrooms. The presidential suite consists of two separate bedrooms with a connecting bathroom. The first lady’s room has a single bed that is larger than a standard Pullman berth, a dresser, closet and washbasin. The connecting bath has a shower, bathtub, toilet, and wash basin.”

Not to be outdone, the president’s bedroom is, nps.gov, states: “the largest of the bedrooms and contains a commode chair to accommodate President Roosevelt’s disability needs. Exhibited in the room is a special wheelchair built for President Roosevelt’s use onboard the railcar. The chair is narrow enough to fit through the doors and hallways of the railcar. The other two bedrooms are identical guestrooms, each containing an upper and lower berth, vanity, closet, dresser, washbasin, toilet, and medicine cabinet.”

“The lower berth converts into a double seat with a table, while the upper berth retracts into the ceiling.”

Finally, the dining/conference room is the biggest room in the carriage, furnished with a large solid mahogany table that seats eight. This is where presidents would entertain official guests (like Sir Winston Churchill).

“This room also contains the small writing desk the presidents used for official business,” nps.gov states. “Displayed in a cabinet above the desk are the china, silverware, and other memorabilia from presidential use of the car. The pantry and steward’s quarters are at the end of the dining room divided by a door and hallway. Here the staff prepared meals for the presidential party, and had separate small spaces for themselves and storage.”

As we mentioned, frequent use of Train Car One has slowly been phased out in favour of air travel, primarily for its convenience, speed and relative safety.

While Joe Biden remains a fan of rail travel, which according to CNN Travel can largely be attributed to the fact his wife and 13-month-old daughter Naomi were killed in a car crash, now he’s got the most important job on the planet, he naturally has to succumb to an increase in protection much of the time – and take the plane.