Surfers are known for their laid-back, devil-may-care attitudes – but it seems Sally Fitzgibbons takes the cake.

The former world #1 and current World Surf League #5 competed at the Margaret River Pro last week, one of Australia’s premier surfing events, in typically impressive style, making her way to the quarter-finals in dramatic fashion.

Naturally, it was exhilarating watching her surf – but for watch fans, it might have been a somewhat nail-biting experience. Fitzgibbons elected to wear her Breitling Aerospace EVO (ref. E79363101C1E1) out into the spray, which as the name might suggest, is not the most obvious choice of timepiece to wear in the water. 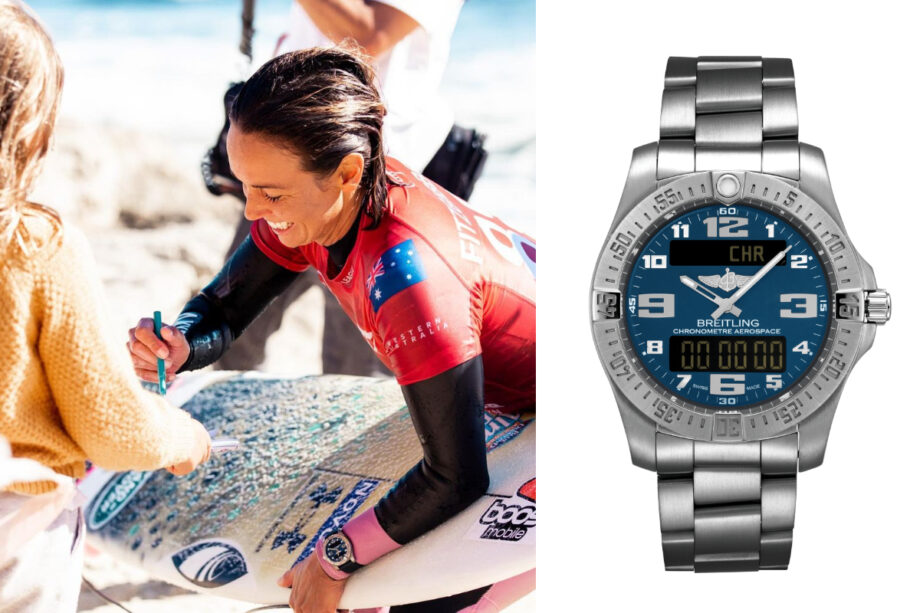 First introduced in 1985, the Aerospace collection was designed from the ground up to be an ultra-sporty and capable chronograph. Featuring a unique layout with two LCD readouts as well as a traditional analogue display, the chronograph is controlled entirely from the crown rather than from dedicated pushers.

Sally’s model is the blue dial, grey titanium variant, but the Aerospace EVO is also available with a black dial paired either with a shinier titanium or black DLC-coated titanium. Its titanium construction makes it durable as well as light, and it is water-resistant to 100m – but the fact still stands that it’s not a dive watch by any means.

As a Breitling ambassador, we’re surprised Sally didn’t opt for something more obviously sports- or watersports-focused within Breitling’s range, like an Endurance Pro or Superocean. Guess she must really just love the Aerospace. We can respect that.

Sally will next take on the waves at the Rip Curl Rottnest Search presented by Corona. This event’s waiting period starts on the 16th of May and concludes on the 26th of May.

Sally will take on fellow Australian competitor Isabella Nichols (current #8 in the world) and California based Sage Erickson (current #12 in the world) in her first heat of the event.