The big news this week was the announcement Bill and Melinda Gates are to divorce after 27 years of marriage and 34 years together as a couple. The high-profile entrepreneur, co-founder of the Microsoft Corporation and regular attendee atop the richest people in the world list, and his fellow philanthropist wife have been quoted as saying their marriage was “irrevocably broken,” yet will promise to continue carrying out charity work together through their Bill & Melinda Gates Foundation.

But while the majority of the world reacts to the news – although we imagine at the time of publishing, people have probably gotten over it, anyone remember when Jeff Bezos and his ex-wife Mackenzie divorced in 2019? – the women of Reddit have been conjuring up devilish plans to seduce the 65 year old, now-single billionaire.

The thread – viewable here – has amassed over 5,000 comments since it was posted 2 days before the time of writing, and sees commentary from some women who try to speak to Bill’s hidden talent of being able to jump over an office chair, by claiming they could, in fact, “jump over two office chairs”, while others said they would “whisper sweet nothings into my COVID vaccine,” a (we hope, joking) reference to the conspiracy theory that Bill was somehow going to exploit the global pandemic by implanting microchips into humans.

Some women revealed their incredibly creative sides: “Hide ‘will you marry me’ on page 37 of an EULA and get him to click ‘agree,” a comment which has received nearly 40,000 upvotes for its genius and originality, although some users were quick to point out that Bill “seems like the kind who reads all the small print.”

Other standout comments and plans include:

“I got an email in suspiciously broken English from Bill Gates a couple of weeks back saying he wanted to give me 50,000,000 USD so I don’t need to bother seducing him. Hopefully the £20,000 I sent him for clearance of the funds will have gone through by now so I should be getting my money any day now.”

But our favourite has to be this incredibly thorough plan from male user LordCitrus. Sorry ladies, we think he wins. 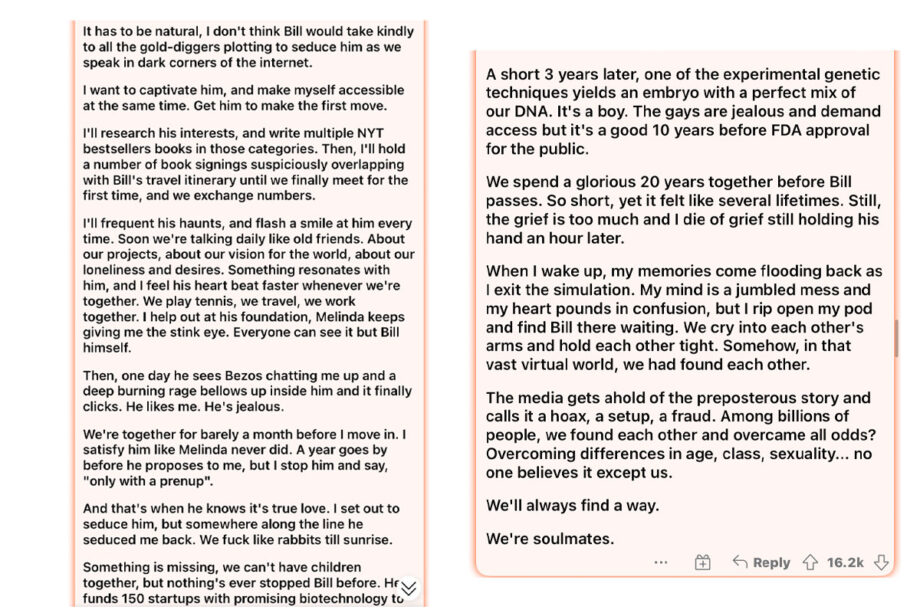 It would certainly win us over.