Despite having damning evidence from German bodybuilding sensation Jo Lindner that women aren’t all that bothered if guys have six-pack abs or not, it’s fair to say it’s still an aesthetic feature that most men crave. To have a six-pack is akin to winning a trophy; they reveal much about a person: that they go to the gym; they work hard on keeping body fat to a minimum; and they sustain themselves on a balanced, healthy diet.

It’s these factors that deter many men from obtaining the holy grail of fitness. To win yourself a six-pack requires much dedication and commitment, and, at the start of the process at least, it helps to stay away from alcohol. To say it’s a challenge would be an understatement.

But one YouTube video recently caught my eye. Uploaded by Travis and Koa Smith, two members of ‘The Smith Brothers’ family, a trio of surfing siblings from health vlog mecca Hawaii, their walkthrough video claims you can get yourself a set of serious abs in just two weeks by following their 10-minute core workout. As someone who has found himself enjoying keeping fit much more than he expected – and previously willing to follow ‘the internet’ for the fitness hacks – yet still unable to achieve the elusive abdominals, I thought I would give it a go.

How hard could it be?

The MC of their gruelling ab workout is Daniel Bachman, owner of D.Bach Functional Fitness on Hawaii’s North Shore, and the personal trainer to all three brothers. We’d liken him to the devil, or some other ungodly being. We’re not sure what kind of figure he’s hiding beneath his hoodie, but the man must be ripped to sh*t. The ease with which he demonstrates the movements to the boys is unlike anything we’ve seen before. The fact the brothers, who are far from unfit themselves, appear to struggle with some of the moves even in the first few reps should be proof enough that this workout will be no walk in the park.

But as they say, ‘no pain, no gain’, and I definitely wanted to gain. And if a route of pain was what it took, so be it.

The beauty of this particular core workout is that it can be performed anywhere, anytime, as it only requires your own bodyweight. So, no excuses…unfortunately.

Daniel provides great instruction to the boys, and to anyone following along, which is to breathe out as you perform the move, and inhale as you return to the starting position. My initial instinct was to inhale as I performed and exhaled as I returned, so breaking this habit and trusting Daniel’s guidance added another obstacle to overcome. But it definitely worked, and I found the movements easier to perform following this method.

That’s not to say they were easy. Just easier. 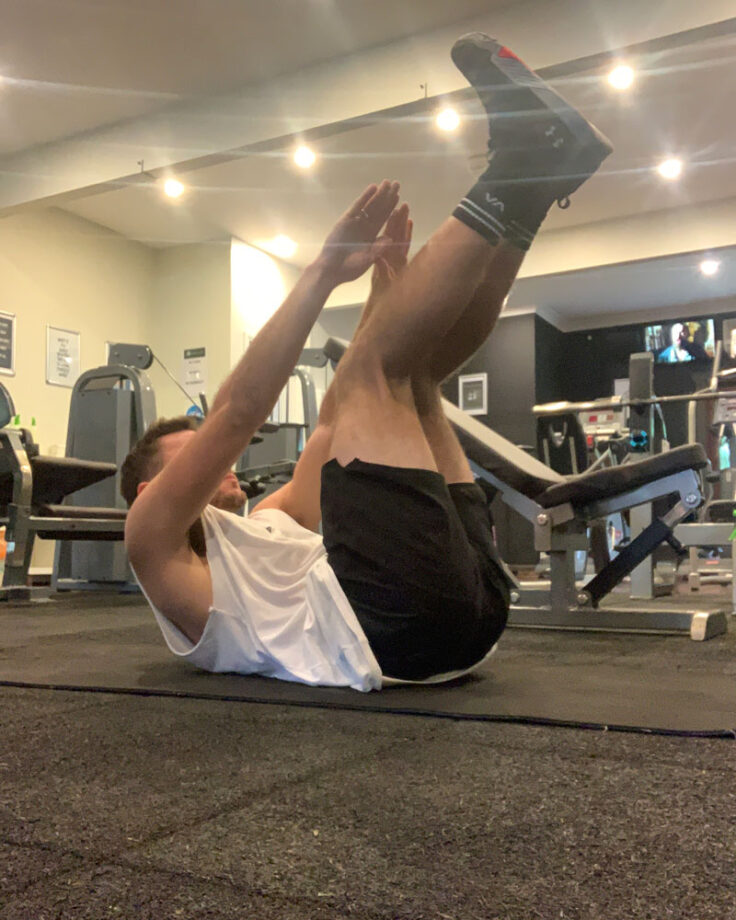 My arms conveniently cover up a seriously distressed look upon my face.

I’m not going to write out the full workout, I wouldn’t want to scare you. But you can watch the embedded video whenever you feel like putting your body through its paces. But for some extra tips with regards to completing it effectively, Daniel provides some advice. Appreciating that these movements are difficult he says “the pace is up to you, you can go slow, you can go fast.”

For the majority of the movements, “the main thing is to keep the upper body isolated”, meaning, don’t use the swing of your legs to help move your upper body. You want to be engaging and using your core instead.

He further adds, “The key is to maintain consistency, take a break if needed and just continue when you’re ready”, and for anyone struggling to maintain the correct technique, Daniel suggest some easier versions of the same movement to help you get through it all, “we’re reducing the difficulty, but still moving forward.” I personally found these to be invaluable.

So, circling back to the point of all this. Was I able to gain a six-pack in two weeks? In a word, no. However, there are other factors at play. The boys suggest completing this workout 2 – 3 times a week, for the two week period. Being honest, I wasn’t able to stick to this. I visited the gym, yes, but I have my own program to work through first, which also includes some core work. On more than one occasion I just didn’t have the energy to put myself through another 10 minutes of torture exercise.

I completed the workout to the best of my ability four times, and admittedly, I did find it slightly easier each time. I took on board the advice about using the breath to aid with movement, and there’s no doubt my core strength improved. I can certainly feel muscle beneath my layer of belly fat, so maybe if I was to continue using this workout, I would gain a six-pack. 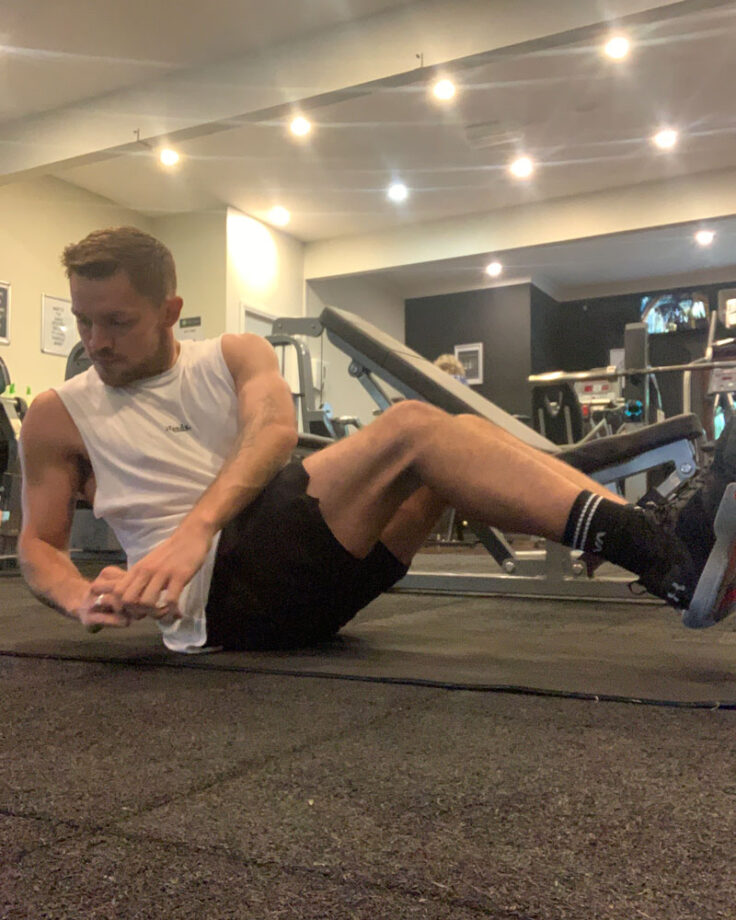 These Russian twists were one of the easier movements, and I certainly felt I had more control over my core.

Therein lies another factor, however: belly fat. You could perform just core workouts for your entire life, but if you have a generous layer of belly fat covering them up, you’re never going to be able to show them off to the world. Shedding body fat could be an easy process, or a hard process for you, depending on your body type. Ectomorphs will find it easiest, but then they also find it harder to put on muscle.

Endomorphs meanwhile put on fat much easier, and therefore find it harder to lose. As we’ve seen before, the key to losing fat is to build up your muscle, although many choose to go down the cardio route of running, walking or cycling their way to a slimmer body. These methods do certainly work, but you also run the risk of losing some muscle in the process.

Something else to consider is the fact this workout is coming via a YouTube video, and not personal, one-on-one training and guidance. Michael Ramsey, co-founder of Strong, a new style of high intensity workout that combines pilates, cardio and rowing into a full-body workout, says this doesn’t necessarily mean a bad thing. “YouTube tends to work really well when you/the consumer, has a base level fo fitness and a basic understanding of movement. No doubt there’s some extremely successful and trustworthy ‘YouTube’ trainers publishing content, however there’s no screening process and an equal amount of rubbish getting published online.”

“It’s important to read reviews, comments and search for success stories before committing to an online trainer. If you’re starting from the bottom I’d recommend getting some fact to face guidance to at least learn the fundamentals and correct form.”

As for whether Michael believes it is genuinely possible to obtain a six-pack in two weeks, he replies with a resounding, “NO”.

“A good ‘6-pack’ generally comes from losing visceral fat (fat around the stomach) which particularly in males is the last spot you lose fat from. This is done through consistent training and eating in a calorie deficit.”

Echoing our earlier comments, he adds, “On a deeper level, proper nutrition, a solid training program, 6-8 hours of sleep per night, 3-4 litres of water per day, and some mobility work throughout the week will get you to not only your goal of a 6-pack, but feeling healthier and better in general.”

I’m going to attempt to keep adding the Smith brothers’ workout into my routine as much as possible. Even if it takes me much longer to see what can be described as abs poking through my stomach, at the very least my core strength will improve.

If so, there’s more where that came from.

Each Monday, Wednesday and Friday we will deliver our top stories to your inbox. Expect to receive the latest in celebrity style & watches, rare and collectable cars, latest business travel and airlines news plus much much more.