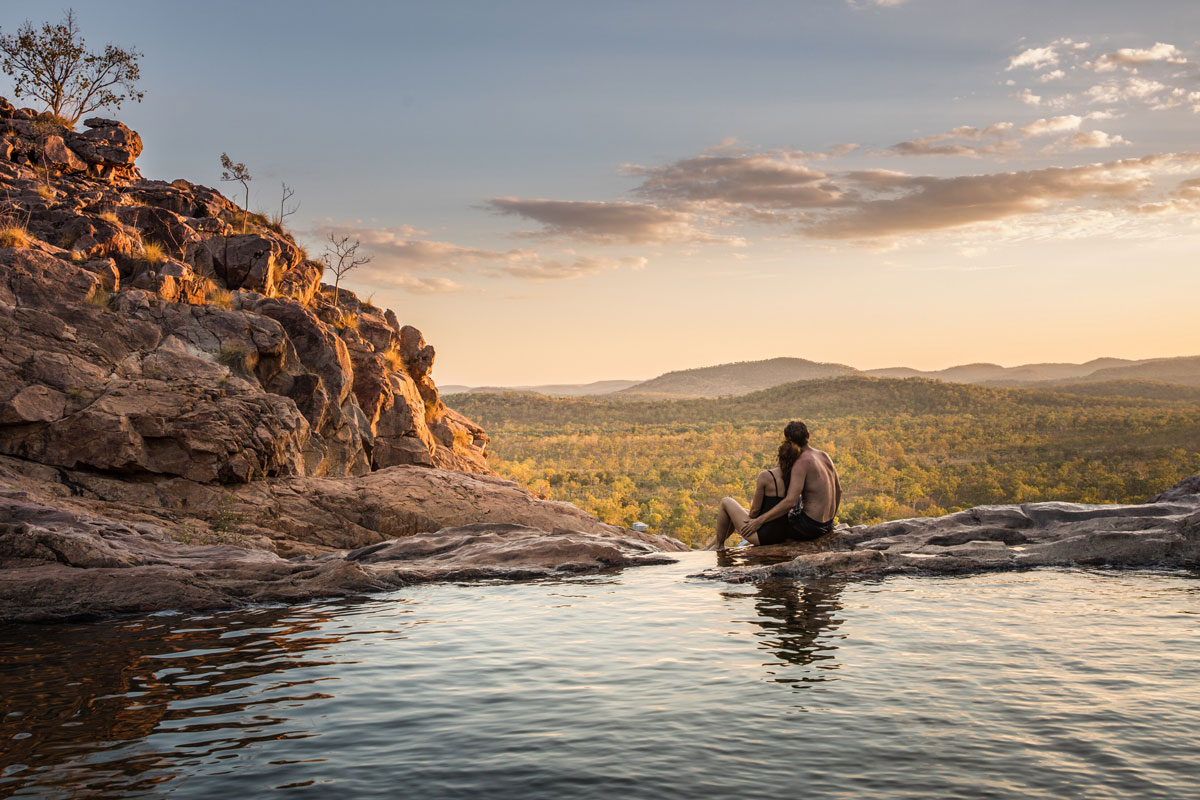 Kakadu is one of the most iconic Australian destinations there is.

But visitor access to one of its most popular sites – Gunlom Falls – is now under question after traditional owners have requested its closure.

Though the top of Gunlom Falls was closed at traditional owners’ request in 2019, the closure of the whole site could soon be on the cards.

The proposal to close it comes amid an ongoing court case between sacred sites watchdog the Aboriginal Areas Protection Authority (AAPA) and Parks Australia. The AAPA is prosecuting Parks Australia for sacred site offences related to the unauthorised construction of a walking track near the popular Gunlom Falls infinity fall.

As the ABC reports, members of an Aboriginal land trust want the site to remain closed until the court battle is resolved.

According to the ABC, “Gunlom Land Trust chairperson Mick Markham said custodians resolved to close Gunlom Falls at a meeting late last week, blaming Parks Australia’s ‘breach of our lease agreement and lack of respect for our sacred sites.’”

He told the ABC authorities were advised of the decision on Monday morning and he expected the gate at the South Alligator River to be locked within the week.

“Mr Markham said he wanted Gunlom Falls to remain closed to the public until the legal action was resolved,” (ABC).

“We have to protect the sites — it’s our religion,” Mr Markham told the ABC.

“That site has been there for over 10,000 years, when the saltwater was eroding the cliff face,” he added.

“The traditional owners apologise to the tourists but for us to get our point across, we feel this is the only way.”

Parks Australia on Wednesday provided DMARGE with the following statement from the Director of National Parks.

“In an Open Letter to the Aboriginal Areas Protection Authority (AAPA), sent 1 April 2021, the Director of National Parks (DNP) reaffirmed her commitment to the re-alignment of the walking track at Gunlom – for which Authority Certificates have been sought and obtained from AAPA.”

“In the Open Letter to AAPA, the Director of National Parks acknowledged that there were concerns surrounding the process that was followed in relation to the Gunlom site and was genuinely sorry for any distress caused.”

“The Director of National Parks acknowledges the importance of sacred sites and the shortcomings in the process adopted for the Gunlom works and has provided an assurance to Traditional Owners that the shortcomings will not be repeated in the future.”

Marion Scrymgour from the Northern Land Council – an independent statutory authority of the Commonwealth responsible for assisting Aboriginal peoples in the Top End of the Northern Territory to acquire and manage their traditional lands and seas – told the ABC the NLC supported the calls of Jawoyn traditional owners to protect the Gunlom region.

“We are continuing discussions with Jawoyn traditional owners on taking appropriate measures, including site closure and other legal options,” she said.

“The NLC supports the call from Jawoyn traditional owners for Parks Australia to accept responsibility and make good the damage that has been caused.”

Parks Australia told DMARGE on Wednesday it had yet to receive a formal request from the NLC to close the Gunlom area, and that the site was currently closed anyway due to seasonal conditions and until crocodile surveys can be completed.

It remains unclear whether, once the legal dispute has been resolved, both the top and bottom pools will open, or whether only the bottom area will open.

Though northernterritory.com and some tourism operators still list Gunlom’s plunge pool as a place to visit (presumably the pages have not been updated), the steep drop off in Instagram posts taken at the top of the site since 2019 would suggest the tourist ban has been taken seriously (with the new posts appearing either to be taken in other areas, or to be throwbacks).

One tourist (not any of those pictured in this article) who has visited Gunlom in the past told DMARGE, “Gunlom was one of the highlights of my trip. The colours and scenery were magic! It really [showed] the beauty of Australia. We are so lucky to live in such a naturally beautiful country.”

“That was a moment I’ll treasure forever and I hope that it stays open for others to experience such magic too.”

“Everyone was very respectful of the area. As the sun set it was silent as everyone was so captivated by what we were witnessing.”

Tripadvisor reviews from 2020 and 2021 show that while some tourists are respectful and understanding of the changes, others are unfortunately less so.

One user wrote: “The care takers are worse than a salty they totally kill the place and any fun to be had. No music, $15 bucks per head just for arriving not even advertised. You can’t even talk after 8pm without the Sheila complaining and telling us she will call the police if she hears us laugh again. New care takers needed they are extremely rude and controlling.”

Another, in August 2020, wrote: “Would of been nice to know that you can no longer access these pools above the water fall, its the only reason I did the long drive down a horrible dirt road, no signs on the way in saying they are closed just a small sign before the walking track! Not happy at all and a total waste of time.”

Another responded: “I really think people who are super entitled and having a whinge about the top pools being closed should really just jog on.”

“For starters, who goes anywhere without doing research these days? Gunlom top pools have been closed for quite some time, so how can anyone with the internet not know that. Secondly, There is so much more that Kakadu has to offer, than a few, overdone, instagram shots. Sure it is a nice place, but If you have any type of intelligence, or cultural awareness, you will remember that Kakadu is ABORIGINAL land.”

“It is a sacred place, and if the traditional owners want to close part of it, then respect that and stop complaining. Not only is Kakadu their home, it is their sacred land. In your own home, you have decisions about who visits and who doesn’t. It’s the same thing. Entitled people, unfortunately seem to think the world is theirs to access at all times. You forget, it is not an open, public spot and the only reason you have access to any of it, is because the Traditional owners have allowed you to come in.”

“If you’re only at Kakadu for the Gunlom top pools, then you’re really missing out on all that Kakadu has to offer. Go do something else. Everyone has seen photos of the top pools to death. And we all know that’s why you’re there. Instagram shots. Go do something cultural for a change.”