When an event as shocking as The Spicy Cough sprays us over the back, it can be hard to think straight.

As such, since the pandemic cut the aviation industry’s legs out from under it, we’ve seen all sorts of pontificating on the changes we will see 3, 5; 10 years from now.

Though some have discussed the possibility of business class travel never returning (as Skift editor in chief Tom Lowry recently told CNN’s Richard Quest, in a video entitled “serious doubts business travel will ever return,” nothing is guaranteed), others are looking at the positives: as Traveller reported recently, business class is currently seeing a mini-boom, thanks to airlines booting so many passengers from economy (among other things).

Rather than throw our two cents on the pile, we’d like to make a humble request to future airline interior designers: please bring back a little bit of the 70s, if and when travel resumes as usual.

In particular, we’d like to see, if not the “shagadelic” designs like that of the Captain Cook lounge, the space within a plane for onboard lounges to exist (something increasingly rare as A380s are killed off the world over). 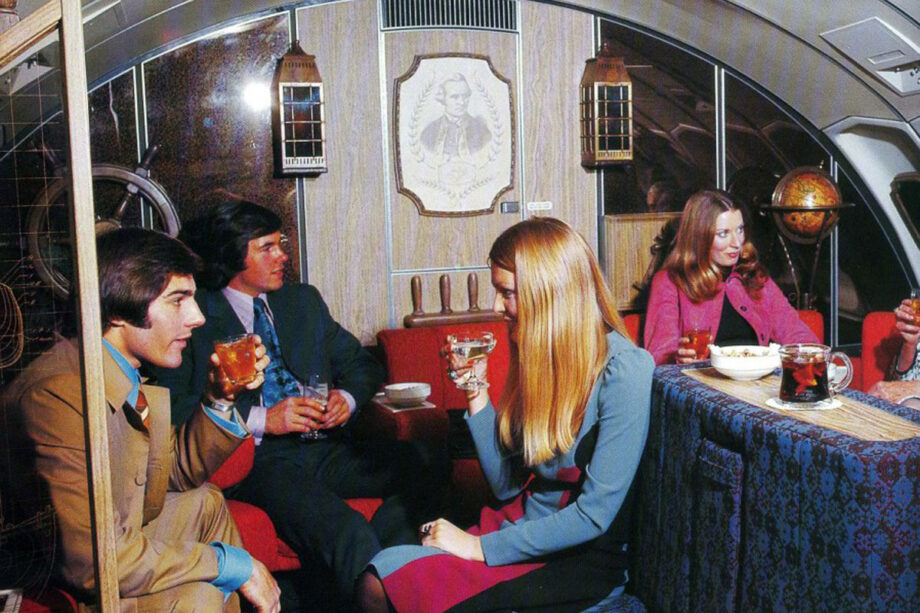 As Qantas explained in a press release in 2017, “When we recently announced plans to expand the passenger lounge on our Airbus A380s as part of a major interior upgrade, we had a flash of déjà vu.”

“Some of our first 747s (delivered in the 1970s and long since retired) had a very groovy upper deck featuring the Captain Cook lounge.”

“Located behind the cockpit in the distinctive bump of the Jumbo, the lounge had seating for 15 passengers, a stand-up bar and décor that should have come with a volume control.”

“Images of James Cook, replica lanterns and even rope was used to give the impression passengers were seated inside a replica sailing ship rather than a brand new widebody jet.”

The Captain Cook lounge was installed on the upper deck of many of Qantas’ 747-200 aircraft and was for first-class passenger use only. Passengers were seated on the main deck (at the nose) and accessed the lounge via the spiral staircase. 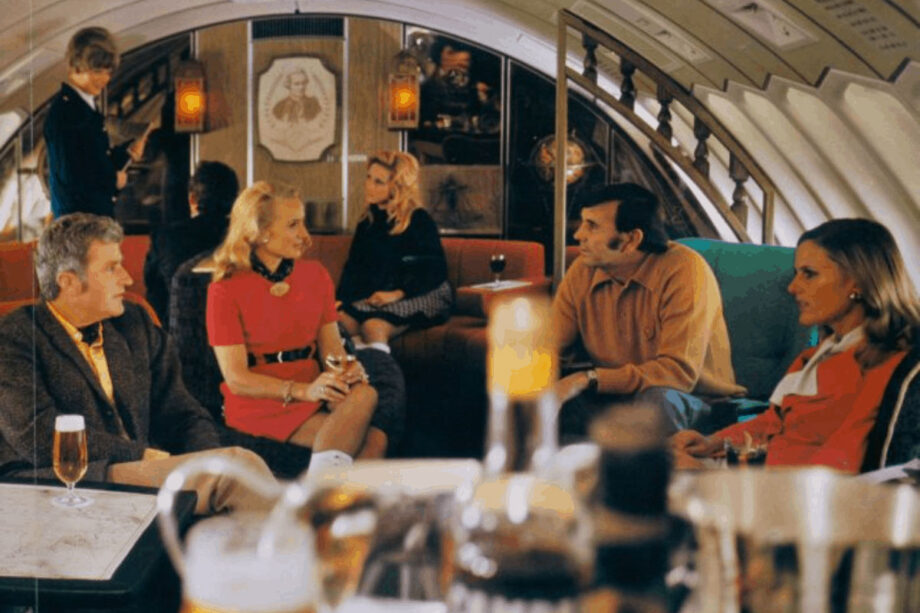 Though the airline pointed out at the time that “thankfully [there would be] a more subtle design for our refurnished lounges on the A380,” we reckon coming out of These Trying Times everyone could do with a splash of colour to brighten their trip.

RELATED: The Radical Changes Business Class Passengers Need To Be Ready For In 2021

Though airlines worldwide are mothballing superjumbos left, right and centre (thanks to diminished demand for long haul travel right now), Qantas is one of the few airlines which still has faith in the big old jet, with CEO Alan Joyce recently reportedly saying: “We think we will reactivate all of the A380s.”

Only time (and ticket sales) will tell if the A380 (and on-board lounges) will continue to be profitable in the future.