Kanye West is one of the most successful musicians of all time, but the field in which he’s arguably been even more successful is in fashion design – specifically, sneaker design.

In particular, Yeezy – the rapper’s long-running creative collaboration with Adidas – has left an indelible mark on modern fashion. Sneakers like the 350 and 750 redefined what a sneaker can be, and modern innovations like the algae-based Foam Runner continue to push the envelope.

But Kanye wasn’t always joined at the hip with Adidas. Some of his first collaborations were with BAPE, Giuseppe Zanotti and Louis Vuitton, but perhaps the most notable was his partnership with sportswear giant Nike, which debuted the ‘Yeezy’ moniker. The Air Yeezy 1 and 2, which haven’t been in production for close to a decade, are some of the most in-demand sneakers on the market, with colourways like the Air Yeezy 2 ‘Red Octobers’ regularly five-figure sales prices.

But if you think that’s a lot of money to spend on a sneaker, you’ll baulk at the prices predicted for this pair of Air Yeezys, set to go under the hammer at famed auction house Sotheby’s in Hong Kong. A prototype pair worn by Kanye himself during his performance at the 50th Annual Grammy Awards in 2008, these were the public’s first taste of a Yeezy sneaker.

In impeccable condition, these sneakers have unimpeachable provenance and a huge amount of historical significance – which is why sneakerheads (and Sotheby’s) reckon they’ll sell for well over $1 million.

That these sneakers can command such a price (and attention) underscore just how much modern fashion and luxury has changed over the last two decades. 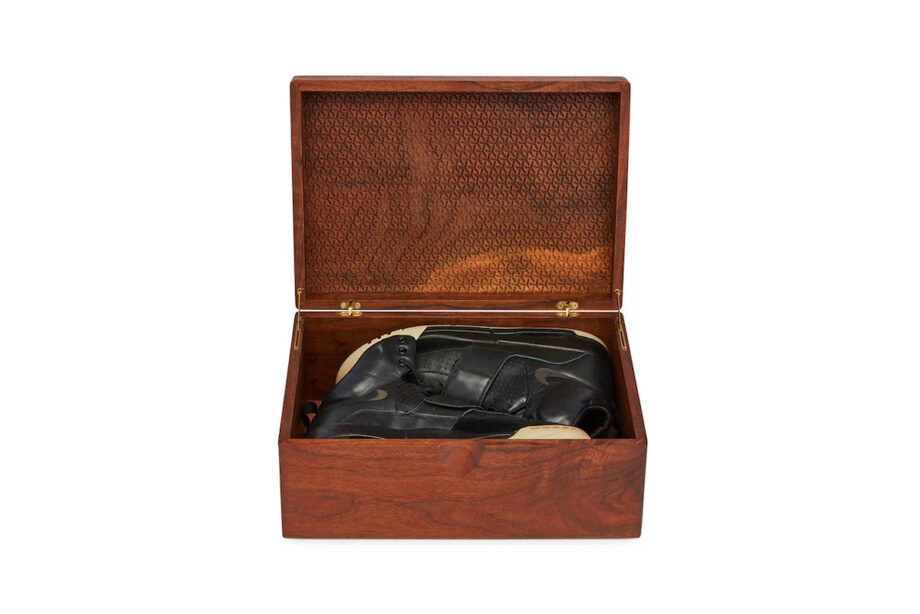 Luxury in 2021 is multitudinous, experimental, and fundamentally youthful. The 21st century has seen a blurring of high and low culture, particularly where fashion is concerned.

The rise of ‘streetwear’ as not only a fashion movement but a cultural one is the defining theme of modern luxury, as is the ‘hype culture’ lifted directly from the sneaker world. And it’s Kanye more than any other figure who’s helped swell that wave. It’s the essence of his oeuvre.

Kanye’s protégés have also been an essential part of this shift in modern luxury, too: Virgil Abloh, of Louis Vuitton and Off-White fame; Fear of God’s Jerry Lorenzo and Heron Preston, just to name a few… Kanye’s influence can be felt almost everywhere, particularly in the sneaker world.

So we’re not surprised Sotheby’s thinks these will get seven-figure offers. If anything, we think they’re being somewhat conservative.

If those predictions come true, these Yeezys could be up for contention as not only the most expensive sneakers of all time but the most expensive men’s shoes of all time full stop – but they’d need to beat out the diamond-encrusted Jason of Beverly Hills x Tom Ford loafers worn by Nick Cannon on the 2014 season finale of America’s Got Talent as well as the 24ct solid gold pair of OVO x Air Jordan 10s commissioned by Drake, both of which are valued at around $2 million.

The honour of the most expensive shoe of all time goes to Antonio Vietri’s Moon Star Shoes, a pair of high-heels fashioned with 30 carats of diamonds, a piece of an Argentinian meteorite dating back to 1576 and a solid gold heel shaped like the Burj Khalifa. Worth just under $20 million, they make Kanye’s creps look cheap (and remarkably tasteful) in comparison.