Watches & Wonders – formerly known as the Salon International de la Haute Horlogerie (or SIHH) – is the watch industry’s most important trade show. Normally held in Geneva, Switzerland, this year’s show is entirely online, running from the 7th to the 13th of April, and any watch fan worth their salt is already strapping in for a week of horological delights.

We’ve already seen some very exciting announcements from brands like Cartier, Panerai and IWC Schaffhausen – but the brand many watch fans have been on the edge of their seat for has undoubtedly been Rolex, who joined the W&W lineup after pulling out of rival show Baselworld last year alongside Chanel, Chopard, Patek Philippe and Tudor.

The wait’s over – with Rolex unveiling exactly what we predicted they would: an update to the Explorer range, with both the Explorer and the Explorer II seeing subtle changes.

But there’s also been some other new watches unveiled that we weren’t expecting – so let’s dive in and explore the range (pun entirely intended).

Rolex pretty heavily hinted that this was going to be their big Watches & Wonders reveal, but there were already signs pointing to this release. 2021 marks 50 years since the debut of the original Explorer II, as well as 10 years since Rolex previously tweaked the model (having previously upped its case size from 40 to 42mm).

Rolex haven’t changed the size of the case this time around, but they have subtly redesigned the case to be slimmer and more in line with their current case aesthetics. What they didn’t do was introduce a new ceramic bezel, as people speculated – instead we get a classic brushed stainless steel number with recessed, blackened graduations.

The 2021 model also features a new, optimized Chromalight display. Aesthetically it looks virtually identical to previous models but now the intensity of the blue lume’s glow lasts longer and in daylight, these display elements also have a brighter white hue.

The biggest change to the Explorer II is that it’s now powered by Rolex’s Calibre 3285. First introduced in 2018, it’s a robust movement that’s resistant to both shock and magnetic fields, and boasts a power reserve of approximately 70 hours. That’s enough that if you take your watch off on Friday night after work, it’ll still be running on Monday morning for the new work week. 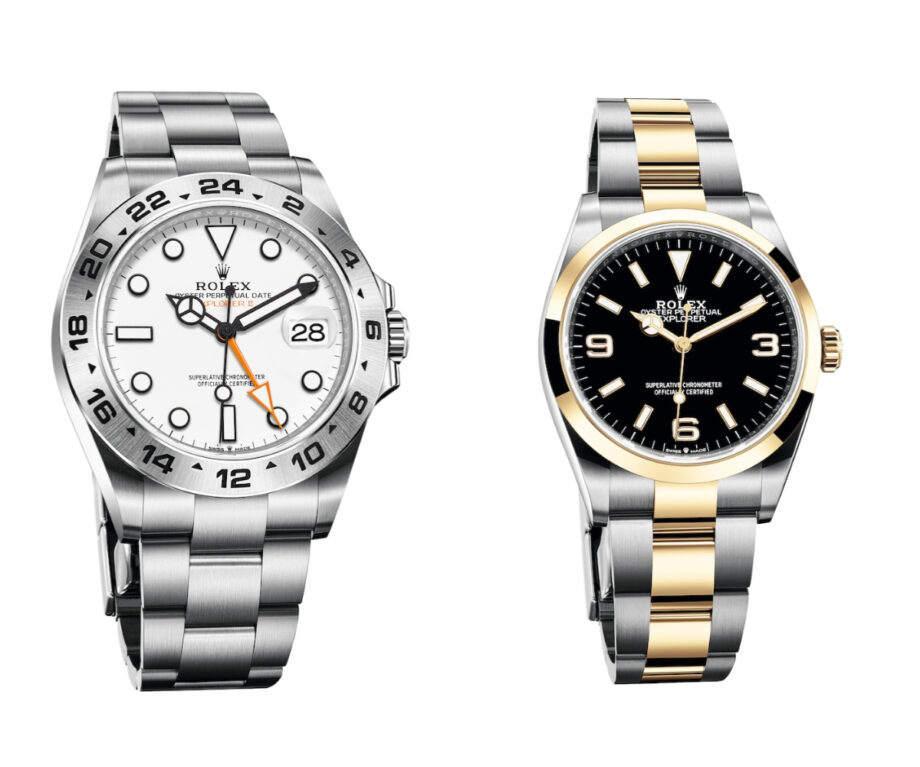 A new Explorer, too

What we weren’t necessarily expecting was a new Explorer I – nor one that’s so radically different – but like the Explorer II, there have been rumours about this update for a while now.

Last year, DMARGE reported on how Explorers on the UK second-hand watch market were getting snatched up in unprecedented numbers, suggesting that even then Rolex insiders were preparing for a shake-up.

RELATED: Strange Rolex Aftermarket Phenomenon Every Savvy Buyer Should Be Aware Of

Like the Explorer II, the new Explorer I benefits from updated, more intense lume – adding to its action credentials – and a 70-hour power reserve, this time powered by Rolex’s Calibre 3230.

But what’s most striking is that it now comes in what Rolex call ‘yellow Rolesor’: a combination of 18ct yellow gold and Rolex’s famous Oystersteel. This is the first two-tone Explorer, and it looks a treat: with that smaller 36mm case size, it’s a really 90s look, one we’re a big fan of.

But don’t worry, the classic pure Oystersteel variant will still be available. 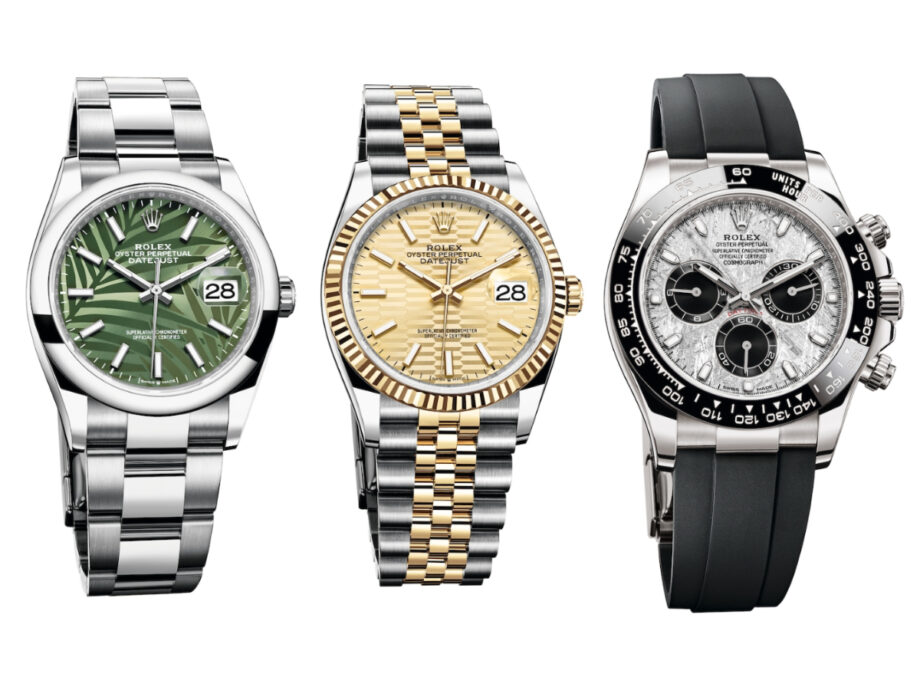 Dazzling dials for Datejust and Daytona

2021 has also seen Rolex unveil a variety of exciting dial treatments for some of their most popular models – namely, the Cosmograph Daytona and the Datejust 36.

The Daytona has now been blessed with a meteorite dial, which we’ve previously seen grace the face of the GMT-Master II. The striking dial has been paired with three different case variants, all made from gold: white gold with an Oysterflex strap, or either yellow gold or Rolex’s Everose pink gold with a classic Oyster bracelet.

RELATED: ‘Sporty’ Rolex Selling Trick That Can Make You Thousands

Even wilder are the new dials making their way to the Datejust 36: two patterns available in a variety of different colours. The first is a ‘palm’ motif, a very tropical, lighthearted design; and the second is a ‘fluted’ motif, which evokes Rolex’s classic fluted bezel… It’s a remarkably Grand Seiko look, actually. 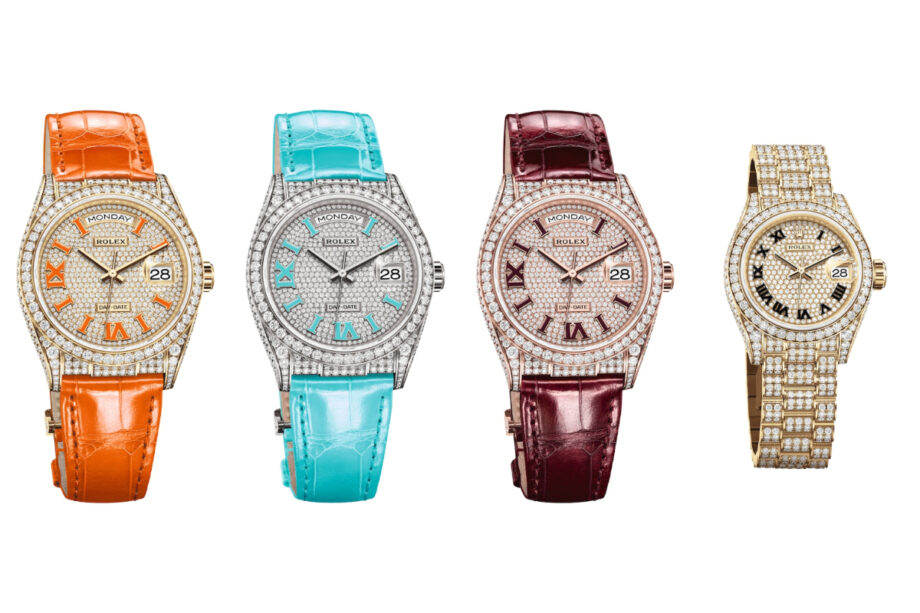 Speaking of combinations, the last two models unveiled were diamond-studded updates to the Day-Date 36 and the Lady Datejust.

Like the Daytona updates, Rolex has hit us with three different gold models: yellow gold, white gold and Everose. But they’ve also given each alloy its own unique, colourful touch: coral, turquoise and burgundy respectively. It’s fun to see Rolex doubling down on bright colours after their super-popular colourful Oyster Perpetual releases last year.

The Lady Datejust, however, is sheer opulence. Diamonds adorn literally every surface of the yellow gold, 28mm watch except for the crown. This might be designed for titchy wrists but we can see ballers like Floyd Mayweather picking it up.

You’d think that would be enough news from Rolex but what was also notable was what they didn’t advertise – namely, that they’ve brought the Oyster bracelet back for the insanely popular ‘Batman’ and ‘Pepsi’ GMT-Master IIs. The devil’s in the details with these things.

…And there we have it!

It’s a lot to take in – can you believe Watches & Wonders has only just started? Rolex’s sister brand Tudor also had an exciting product presentation tonight, but that’s another story…