When it comes to fast cars, there are two countries that dominate the industry: Germany and Italy. These two European automotive heavyweights are home to the majority of the world’s most famous performance brands – but their national characters and design philosophies are wildly different.

The Italians are flamboyant, passionate and artistic; their cars known less for their reliability than they are for their dramatic, emotive qualities. The Germans are efficient, technical and driven: they know how to make fun cars, but they’re rational and scientific about it. Except when they’re not.

Case in point: the E31. The first generation of the BMW 8 Series and a true design icon, the E31 is an example of the Germans loosening their ties and going a bit Italian. A sleek grand tourer with many design features BMW (and many other manufacturers) have never repeated since, the E31 8 Series is truly bonkers.

Pop-up headlights that protrude through the hood, necessitating special cutouts. A hardtop body style with no B-pillars and astronomically long windows. BMW’s first-ever V12 engine. The E31 was, quite frankly, a silly car, and remains one of the most unique BMWs ever. But the reason they’re not more popular is that they’re notoriously hard to look after – in no small part thanks to all those quirks.

…Which makes this E31 that’s up for sale in Brisbane’s Bowen Hills even more impressive. An absolutely mint example of the shark-like Beamer, this 1995 model might just be the most beautiful BMW in the country. 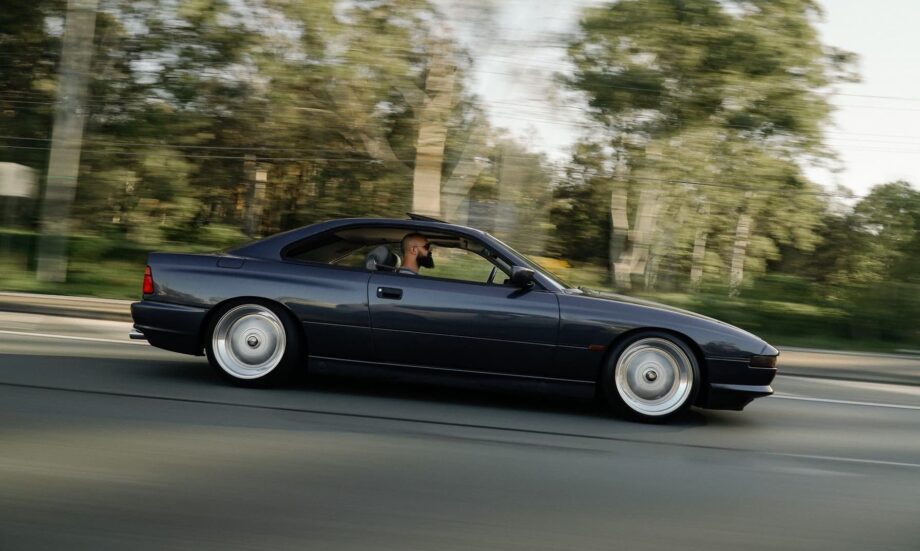 First things first, this 840ci doesn’t have the V12: it has the entry-level 4.0L V8. But that’s actually a good thing: the V12 might make more power (and you can boast that you have 12 cylinders) but it’s a notoriously complex engine that’s difficult to service. The V8 is a much easier beast to live with and still makes a healthy 210kw – more than enough to chop an E30 at the lights.

What it does have is arguably the best colour for an E31: Cosmoschwarz Metallic, a rich black with a subtle metallic fleck that gives it a creamy and appropriately cosmic look. The driver has also lavished attention on the car, from the paint down to the drive height – which is what you need on a un-German German car like this.

The owner “has been kept as a weekend driver which has always been garaged and detailed weekly,” and “the whole vehicle has been resprayed as the boot and roof were fading when I bought the vehicle and thought it could use a freshen up, the new paint then had G-Techniq Crystal Serum Ultra paint protection applied.”

“All electrics, Cruise Control and Air Con work superbly with digital displays still showing all digits with the rest of the interior being in fantastic condition overall with [a] ceramic window tint installed. It has a full Polk Audio system with their top of the line MM Range Component front speakers [and] coaxial rear speakers that are behind the factory speaker mesh, retaining the original look. [It also has] a sealed 12″ MM Range Dual Coil Subwoofer with Monoblock, 4 channel amplifiers and a Pioneer head unit.”

But of most interest to buyers are the performance modifications: “a set of Ceika coilovers were purchased from Germany and installed with fully adjustable camber and damper settings to give it a more modern look with a firmer yet still comfortable ride… finally, a set of period-correct BBS RF 3 piece wheels were purchased from the UK and rebuilt here in Brisbane with new genuine BBS hardware, new inner barrels with a 16″ – 18″ step outer lip… 18×9.5 on the front and 18×11 on the rear with near new tyres.” 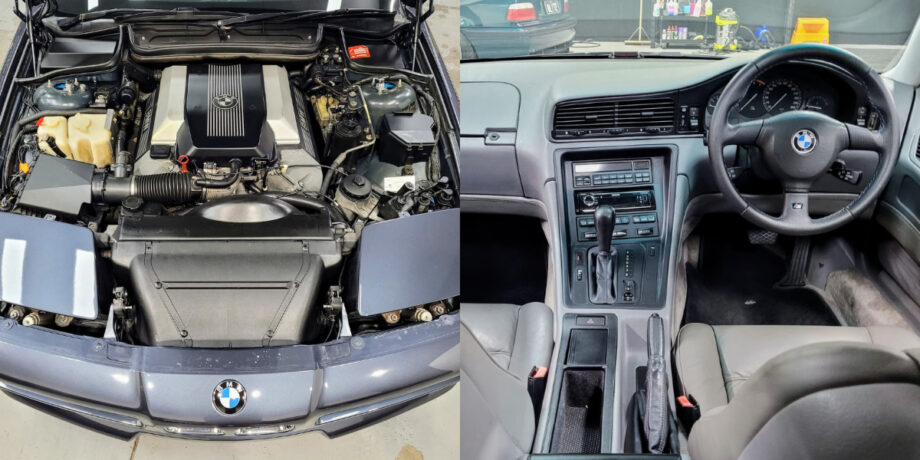 Under the hood and under those tints is pure German goodness. Image: Robert Sinnott

Let’s put it this way: it’s the youngest and cleanest first-gen 8 Series on Carsales in the entire country, and for $48,500, it’s one of the cheapest, too. Who cares if you don’t have the V12 – you don’t buy a 26-year-old performance car because you want to beat a Tesla down a dragstrip, you buy it because it looks cool.

And this one looks cool. Like a Berlin bartender wearing a Giorgio Armani suit.

Check it out before it gets snapped up in this overheated market.