Audemars Piguet is a titan of the watch industry. One of the ‘Holy Trinity’ brands alongside Patek Philippe and Vacheron Constantin, these prestigious Swiss brands boast centuries-long histories of fine watchmaking, and few brands have had an impact on the world of haute horlogerie like these three.

But in many ways, it’s Audemars Piguet whose influence can be felt strongest in today’s watch world. In 1972, AP introduced the Royal Oak: designed by legendary watchmaker Gérald Genta, the Royal Oak was the first luxury sports watch in the world. Even today, its design is avant-garde and eye-catching. Inspired by traditional diving helmets and featuring an integrated metal bracelet, the Royal Oak is an absolute icon.

The success of the Royal Oak spurred other watch brands to release their own luxury sports watches, such as the Girard-Perregaux Laureato, the Patek Philippe Nautilus, the Piaget Polo and the Vacheron Constantin Overseas. But AP was the first, and the Royal Oak radically changed the landscape of modern watchmaking.

These days, AP makes literally hundreds of variations of the Royal Oak, in different materials and with different complications, but the most iconic is arguably the ref. 15202ST, also known as the “Jumbo”. Widely considered to be the ‘purest’ expression of the Oak, the stainless steel sports watch stands out as a particular fan favourite – which makes it particularly shocking when AP announced they’re discontinuing it.

“So another huge watch company, actually, said recently that they would stop making the 5711, which is so Patek… We could say there will be a new reference for the 15202 next year. So we will not make 15202ST, but that will be replaced by something else, and for specific reasons that we will not talk about today.”

It’s a bizarre choice for AP to make. Like virtually all luxury stainless steel sports watches, the demand for the 15202ST remains astronomically strong and waiting lists for the model stretch into the years… But it’s precisely that waiting list length that’s probably precipitated this decision, The Truth About Watches’ Robert Farago relates:

“Patek eliminated the 5711 to walk away from the wait-list-a-mania bedevilling the model, presumably to increase sales of its other, more profitable pieces. It makes sense that Patek’s crosstown rival would follow suit by dropping the Audemars Piguet 15202ST. There’s currently an eight-year waiting list for the most Genta of Royal Oaks.”

While the move might pay off for Patek, Farago suggests that it’s perhaps a riskier play for AP to make, considering how wildly divergent the two brands’ product ranges are.

“Patek Philippe has a much wider variety of watch styles and designs to ‘fall back on’ (i.e. divert buyers from a watch they couldn’t get to one they can). All AP has to offer are the [bloated range] of Oaks and the Code 11.59, an unsuitable Oak alternative.”

“[Bennahmias] promises to replace their steel grail Oak with something [but] it’s hard to believe that this something is going to be something other than another Royal Oak of some sort or description (though I can’t think of any variation they haven’t already created).”

Case in point: Patek currently offers 27 different versions of the Nautilus – hardly a small amount, but only a fraction of the total number of models Patek produces. In comparison, AP currently offers a whopping 114 different Royal Oaks… And that’s not even counting their Royal Oak Offshore or Royal Oak Concept lines. 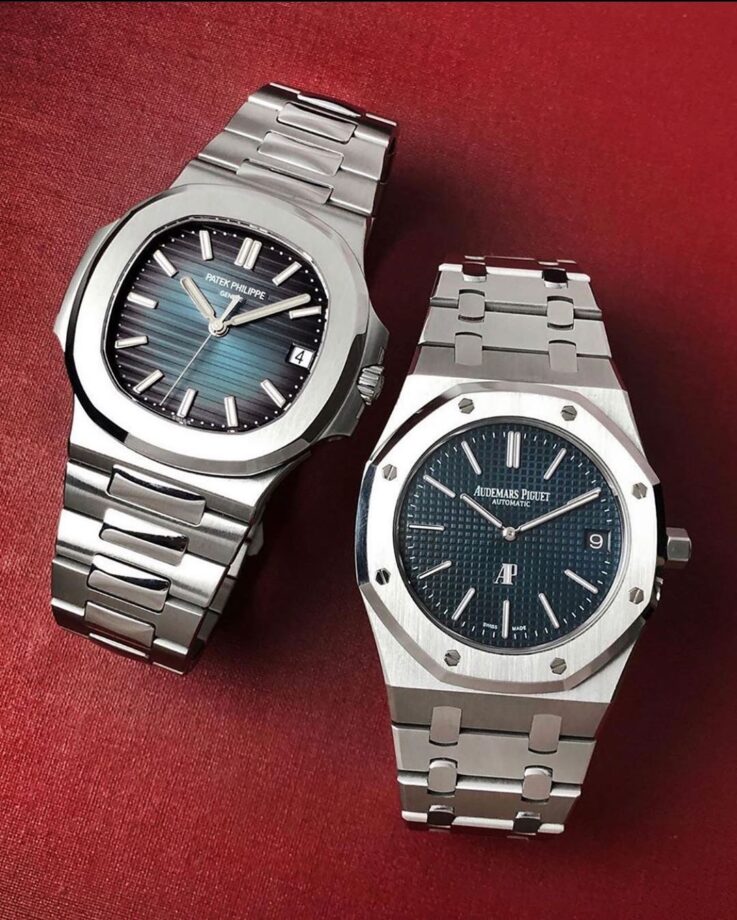 Pick your poison: the Patek Philippe Nautilus and the Audemars Piguet Royal Oak. Both watches were designed by Gérald Genta, hence the strong resemblance. Image: Pinterest

AP is hardly the worst offender when it comes to putting all their eggs in one basket like this (Hublot for example makes 231 versions of their Classic Fusion watch, for example). In fact, you could argue that it’s almost a strength: discontinue one steel Oak, and there’s plenty more for fans to fall back on.

Still, it must be galling for anyone who’s spent years patiently waiting for a new 15202ST only to hear that AP have pulled the carpet out from underneath them.

RELATED: Canada, China or Colombia? Where To Score Rolex’s Hard To Find Models

In just over a week’s time, Watches and Wonders – now the world’s largest watch fair – will kick off in Geneva, with 40 prestigious brands set to present at the hybrid trade show. Audemars Piguet, however, is noticeably absent from the lineup, which includes the other two ‘Holy Trinity’ brands as well as other heavy-hitters like A. Lange & Söhne, Cartier and Rolex.