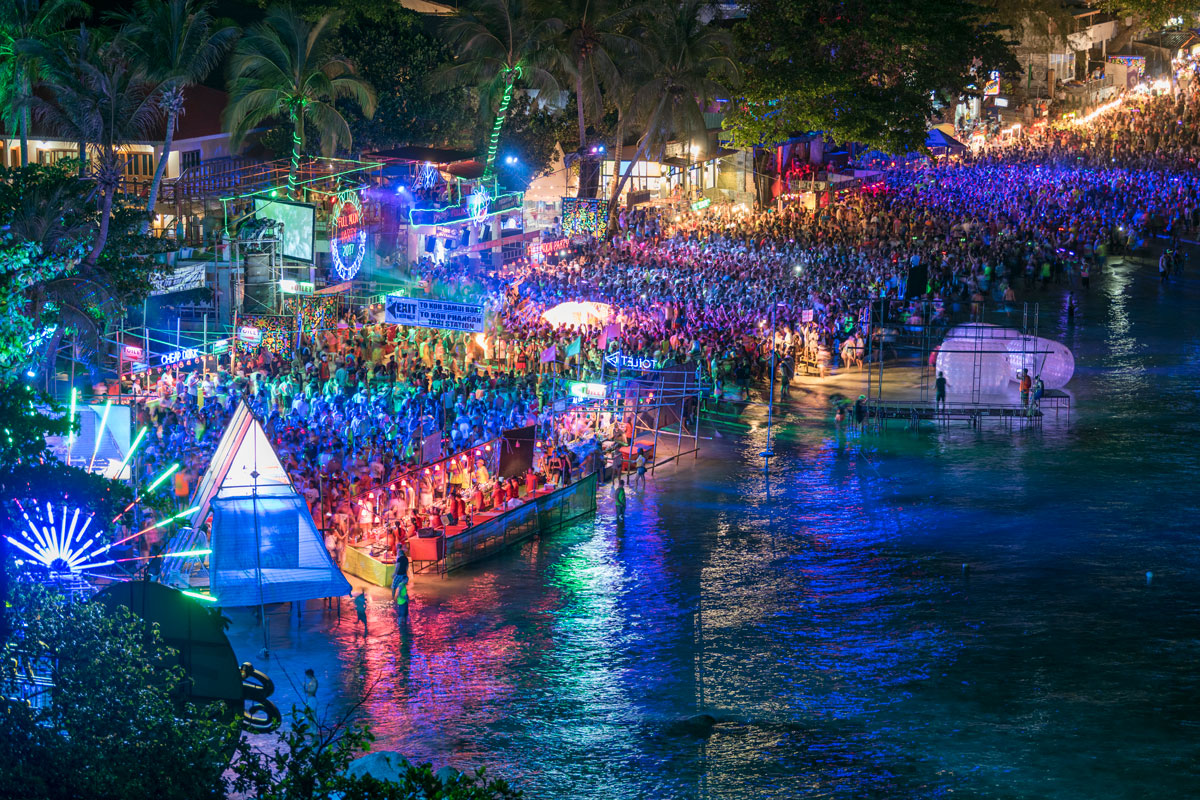 Vodka in Russia. Fosters in Australia. Caramel macchiatos in Seminyak. Guinness in Ireland. Budweiser in America. Some things are just so cliche they have to be done.

Enter: Thailand’s full moon parties. A rite of passage for South-East Asia backpackers, an all-round good time, and the only thing most of us heathens know Koh Phangan for.

The island’s days of buckets of vodka and neon lights (and 30,000 visitors per month) may be numbered though – with a pandemic sweeping the globe a whole lot of things have changed.

… according to CNN Travel, compared to before, “The deserted streets of this small town are a study in neglect.”

“Shabby shops offering cheap Thai massages or advertising bamboo tattoos are shuttered, their doors fastened by heavy chains. The only things missing from the eerie scene are giant balls of tumbleweed: not a possibility in this verdant tropical paradise.”

Before and after photos demonstrate this.

Old photos (and top posts) under the Koh Phangan and Haad Rin beach geotags are full of people and partying (see above). Recent photos are either throwbacks or show much quieter scenes (see below).

Before The Spicy Cough rocked the world, a normal full moon night in Koh Phangan’s Haad Rin beach would see bars crammed with revellers, inhaling punchy cocktails served in buckets and nodding along to ear-busting beats.

Some locals have their fingers crossed such Full Moon scenes will (safely) return however, this summer.

“We are hopeful,” one local member of the Haad Rin Business Association told CNN Travel.

The future of Thailand’s Full Moon parties is being discussed on Twitter too.

It’s a tale as old as mainstream travel itself: the formerly chilled out, hippie gig began as a low key event but has now – in many people’s eyes – turned into an overcommercialised, crime-ridden invasion of the island.

I visit Koh Phangan a lot. The island’s economy revolves around these parties. They may not like them but they like the money.

Some want the cash cow killed, some want it to return bigger and more profitable than ever, and others want to adapt it to better suit everyone (as is happening all across the globe, from Amsterdam to Croatia).

This is why it’s so important to get the people of Thailand vaccinated, not just the people of Phuket and other touristy areas. https://t.co/bu8fObHw3y

Others called for a focus on Thailand beyond just the tourism hotspots, in order to facilitate a sustainable return to tourism for the country.

“The last event before the pandemic in February, we had 20,000 people at the party. The absence of customers has had a knock-on effect on everyone from business owners to food sellers, migrant workers and taxi drivers.”

“We accept constructive criticism, but there’s no reason why the Full Moon Party cannot come back when tourism opens up again.”

The group Noi is part of – Haad Rin Business Association – told CNN Travel they would like to improve the area.

As CNN Travel reports, “They accept the need for mask-wearing and social distancing: at least until the pandemic is firmly in the rear-view mirror [and] hope to attract a wider diversity of higher-quality businesses to Haad Rin to replace the massage and tattoo parlours and tacky souvenir shops, many of which are closed permanently.”

It’s also worth reminding tourists there is a lot more to the island than the parties too – something the million-odd Instagram posts with the ‘kohphangan’ hashtag pay testament too.

The problem of crowded events – and how best to manage them – is being experienced all around the globe – from Australia to Miami to the Netherlands.

In the Netherlands, for instance, a music festival is taking place, despite the rest of the country being under a lockdown.

As the BBC reports, “The two-day experiment aims to see if there’s a safe way to allow large-scale social gatherings to restart, without increasing the spread of the virus.”

Fingers crossed they find a way.