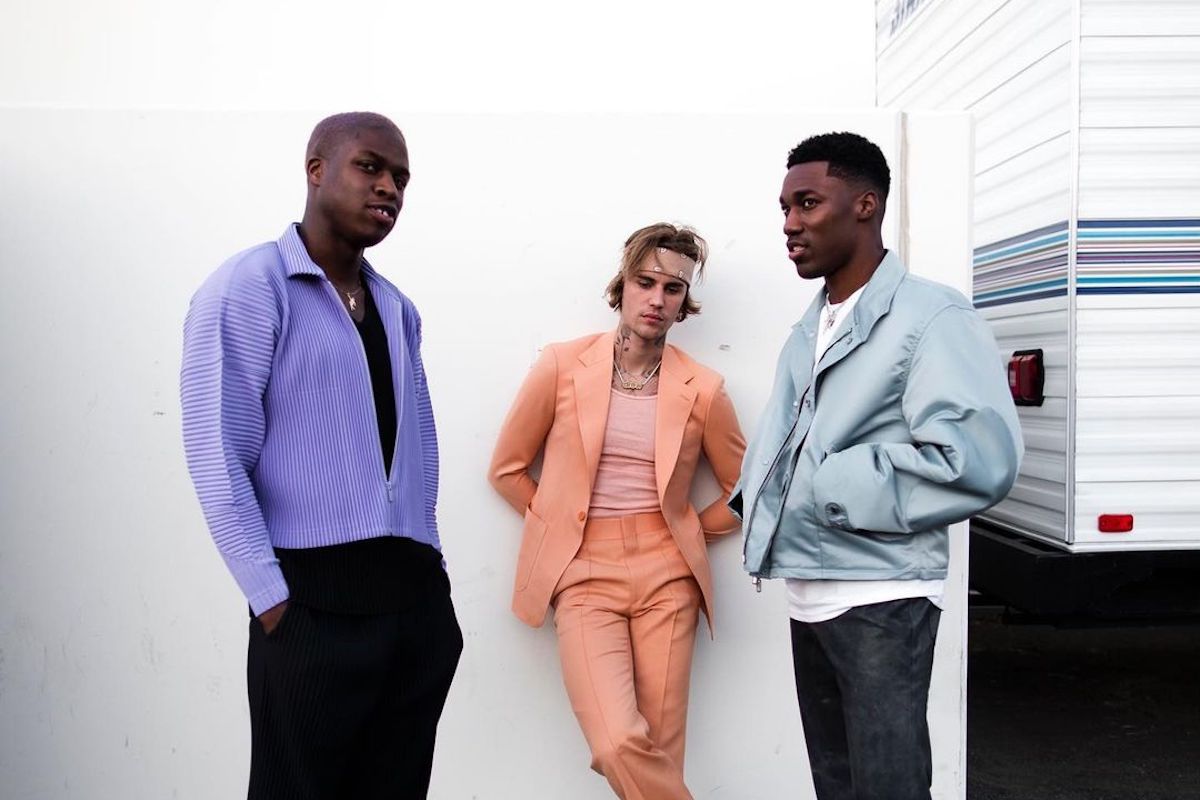 We’re only three months into 2021 but Justin Bieber’s already on a roll.

His sixth studio album, titled Justice, drops today, and he’s already released four hit singles from it: Holy and Lonely last year; Anyone on New Year’s Day this year; and Hold On earlier this month. Every single so far has dominated the charts and wowed audiences with their slick accompanying music videos – a good sign for the upcoming album.

But Bieber’s not stopping there. Yesterday he announced that the music video for a fifth track, Peaches, will also drop alongside the album, and that he’s filmed yet another high-budget music video for the track alongside featured artists Daniel Caesar and Giveon.

As part of that announcement, he shared a photo of himself with Caesar and Giveon relaxing behind the scenes on the shoot – wearing a rather eclectic peach-coloured suit (very fitting) that we reckon few other men would be able to pull off as successfully.

While you’d think that in 2021 men would finally get over their pink prejudices, it’s still the case that few men – let along male celebrities – choose to rock the colour. Which is a shame, really, as pink can be a rather versatile and stylish palette to build an outfit around. Case in point, Justin Bieber.

RELATED: How To Wear Pink, No Matter The Occasion

Seemingly taking some styling cues from Frank Ocean, Bieber matched his peach suit – from cult LA-based designer Patrick Henry’s luxury brand Richfresh – with some casual sportswear: a big headband, white Nike Air Force 1 Low sneakers, and a tank top instead of a shirt. The tonal fit looks simultaneously classy as well as breezy, proving that you don’t need to be confined to the regular suit, shirt and tie combo to make a stylish statement.

Bieber was also spotted in Paris filing yet another music video, this time atop the roof of the Hotel de Crillon, somewhat evoking the Beatles’ final live performance atop the Apple Records building in London. No news yet on when we’re likely to see that clip, however…

You can pre-save Justice by following the links here.