The Australian hypebeast is a unique consumer. While in the US ~fresh~ kicks are ingrained in the country’s NBA/Hollywood lifestyle, it’s a little more niche in Australia.

That said – the clique is growing.

Though our hypebeast community is smaller than America’s, they are equally committed to finding rare sneakers. Case in point: a recent post in the Air Jordan (Australia) Facebook group.

The group, based in Sydney, Australia, exists to help members “buy / sell / trade all kind of AIR JORDAN shoes,” and has 20.8k members.

Posted on a Sunday night at 9:47pm, the post reads as follows:

“If there’s anyone feeling kind vibes tonight and is willing to make a small profit (not a triple turnover) on their university blue cop……please message me! Looking for a 7.5 for $350.”

While some users said, “You’re dreaming,” and, “You’re talking to Robots they have no feelings,” another made an even bolder offer in return for the same pair of coveted kicks.

“I’ll give someone a free OF subscription for a pair x.” 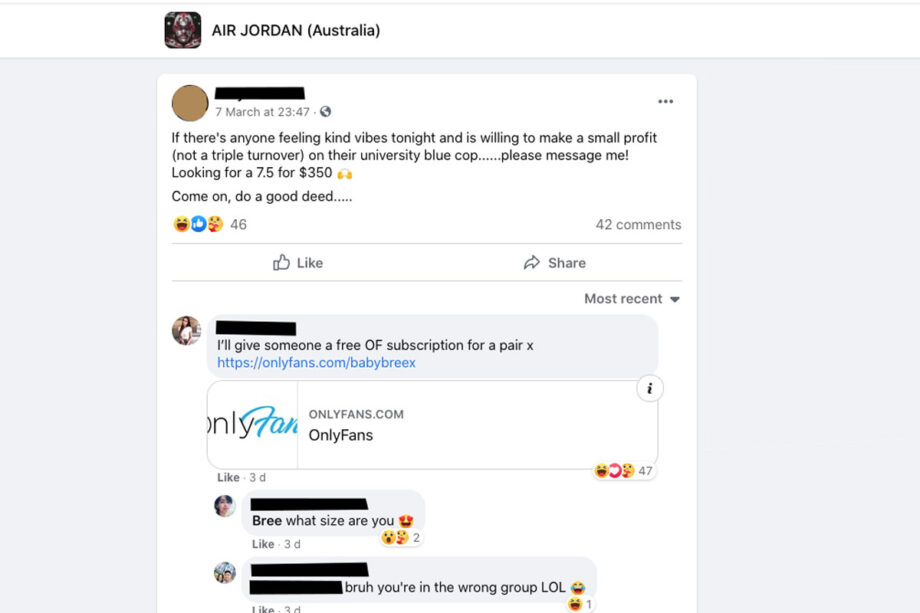 Some users appeared to take it seriously, writing: “what size are you?” and “bruh you’re in the wrong group.”

Whether or not the comment was made in jest, the user wouldn’t be the only one going to great lengths to score sneakers.

As Bloomberg reports, “Sneakerheads have turned Jordans and Yeezys into a bona fide asset class.”

Though at first glance this appears an exaggerated statement, seeing how fast the Air Jordan (Australia) Facebook group is growing, one is forced to at least think twice.

At the time of writing the page’s “about” information read as follows:

RELATED: How To Wear High-Top Sneakers For Every Occasion

These statistics attest to the lengths Australian Air Jordan lovers are willing to go to in order to score their grail shoe, and to the aftermarket’s growing popularity.

This incident comes in a context where Nike sneakerheads have been rumoured to have been held at knifepoint in store after shipments have been dropped, as well as sneaker resellers, The Daily Telegraph reports, scouring shops in organised groups to empty shelves of desirable models.

That’s before we even get into ‘porch pirates‘ tracking DHL deliveries and swiping other people’s purchases from their doorsteps.