Many young talents who get their start with the Disney Channel have had a rocky transition into adulthood, but the Jonas Brothers are a notable exception to that rule.

While Nick, Joe and Kevin were inseparable as a boyband, they’ve since each focused more on their individual pursuits, only briefly reuniting in 2019. As adults, they’ve gone their different ways – but something they still have in common is an impeccable taste in watches.

The three brothers’ combined watch collection is rather impressive and they’ve consistently shown taste beyond their years, with brands like Audemars Piguet, Bulgari and Richard Mille just some of the names among the trio’s collective collection. But we’d like to focus in on two watches the youngest two brothers have been spotted wearing recently, which illustrate an emerging trend in the celebrity watch world.

Earlier today, Joe Jonas posted a photo of himself relaxing in a park, coordinating a blue baseball shirt and jeans with a Rolex GMT-Master II ‘Pepsi’ (ref. 116719BLRO), famous for its blue and red bezel. All three of the brothers own a ‘Pepsi‘ of some description, but Joe’s is made from white gold, as opposed to the standard stainless steel.

This comes after Nick Jonas yesterday shared a photo of himself with an OMEGA Speedmaster Moonwatch Professional (ref. 310.60.42.50.02.001) – also in white gold. 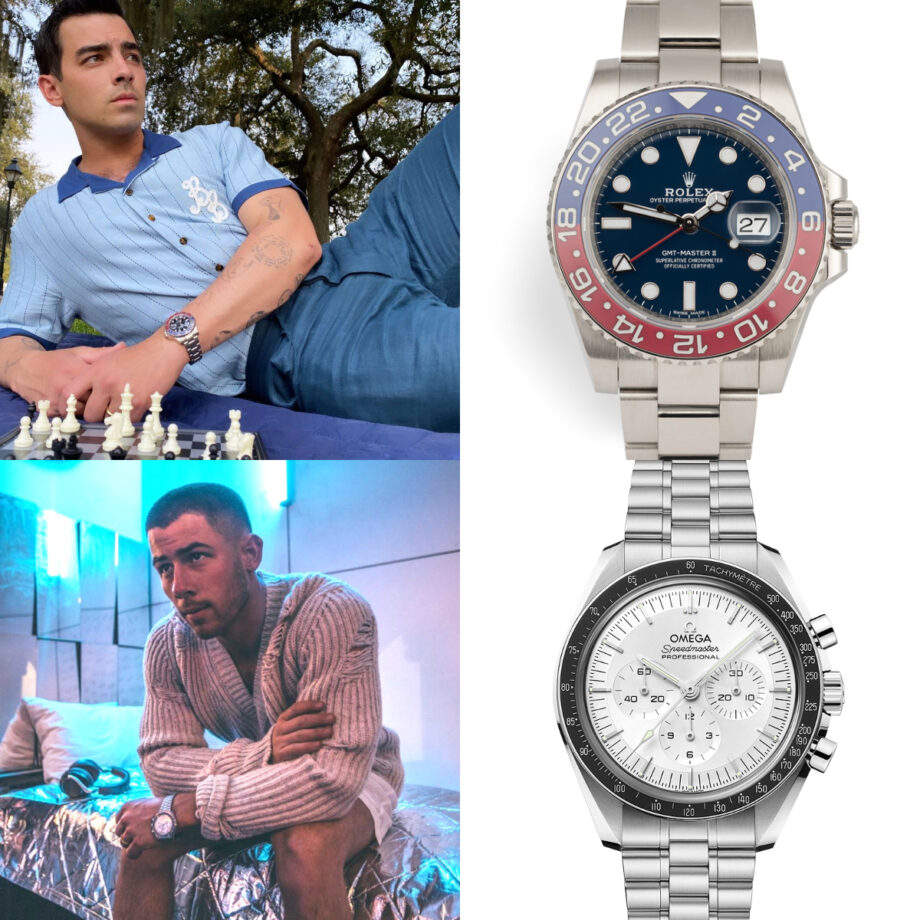 Top: Joe Jonas with his ‘Pepsi’. Bottom: Nick Jonas and his ‘Speedy’.

Interestingly, both watches are among a select few models that have gone to the moon – albeit in stainless steel form as opposed to white gold. While the OMEGA Speedmaster was the official issue watch for NASA’s Apollo program, the Rolex GMT-Master was also incredibly popular among flight crews, Hodinkee relates. (The GMT-Master never made it to the lunar surface, however – so OMEGA has that over Rolex, at least).

RELATED: OMEGA Gives Its ‘Moonwatch’ A Much Anticipated Upgrade

Is white gold the next big thing when it comes to celebrity watches? Only time will tell. The ‘moon’ theme the Jonas brothers have evoked here is no coincidence, however: Nick just released his fourth studio album, which is called Spaceman. Hopefully it’ll get him some gold records, too.

They say it takes a year for trends to trickle down, so we look forward to seeing this on your wrist in approximately 12 months…