The 27-year-old music superstar is usually a pretty well-dressed dude, but footwear seems to be his kryptonite, as he consistently opts for rather weird options. The man famously has a fetish for rubber (shoes, we mean), like Crocs or these designer gumboots – and he’s a devotee of Kanye West’s most radical sneaker designs, like these alien-looking slides.

Now it seems he’s back on the Yeezy tip once again, spotted in Los Angeles earlier this week with a pair of Yeezy 450 ‘Cloud White’ sneakers. Kanye’s partnership with Adidas has produced some seriously avant-garde sneakers over the years, but these 450s might just be the weirdest Yeezys yet: futuristic and organic-looking, they hark back to some of the early 00’s craziest aesthetics.

Bieber leans into that 00s vibe with his outfit, too – rocking some baggy, paint-splattered trousers and a baseball jersey-inspired short-sleeve shirt over a long-sleeve shirt. Radical, dude. 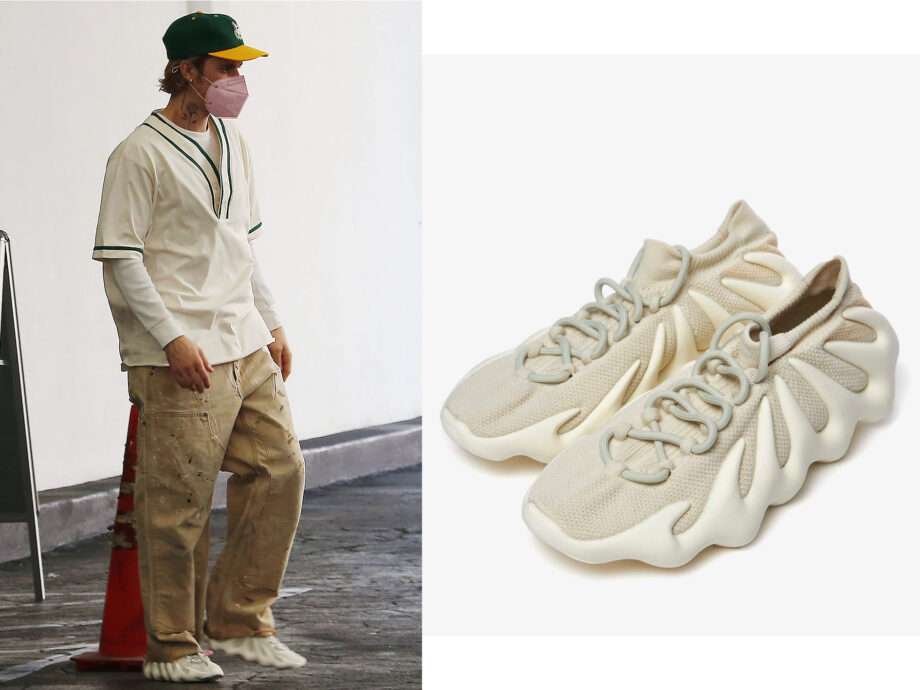 Normally sneakerheads cuff their pants in order to show off their shoes, but Bieber’s not so fussed.

Bieber might be a fan but not everyone’s keen on Kanye’s latest footwear design. Commenters on well-known sneaker speculator Yeezy Mafia’s recent Instagram posts reveal that sneakerheads “can’t tell if these are dope or ugly as hell”, with one commenter dubbing the 450s the “Divorce Yeezys” (referencing West’s speculated divorce from wife Kim Kardashian).

“Should’ve saved these for the grand opening at The Gap… Them clothing store generics,” one fan brutally quipped. Last year, Kanye signed a 10-year, million-dollar deal with the giant American clothing label to produce “modern, elevated basics for men, women and kids at accessible price points,” The New York Times reports. Ironically, West used to work at The Gap as a retail assistant in his teens, notably rapping about having stolen from the store’s supply in order to make some extra money on his 2004 track Spaceship.

While there’s plenty of trash talk circulating on the Internet about the 450s, the ‘Cloud Whites’ still sold out in minutes when they dropped on the 6th. The release also didn’t come without controversy, either: fans complained that the anti-botting software Adidas/Yeezy employed prevented far too many genuine customers from checking out.

Last week, Bieber announced that his sixth studio album Justice was almost done, and due to be released on March 19th. He’s already released four singles from the album: Holy and Lonely last year; Anyone on New Year’s Day this year; and Hold On only last week, alongside a slick music video that sees Bieber engage in a thrilling motorcycle escape from police. You can watch the clip here.