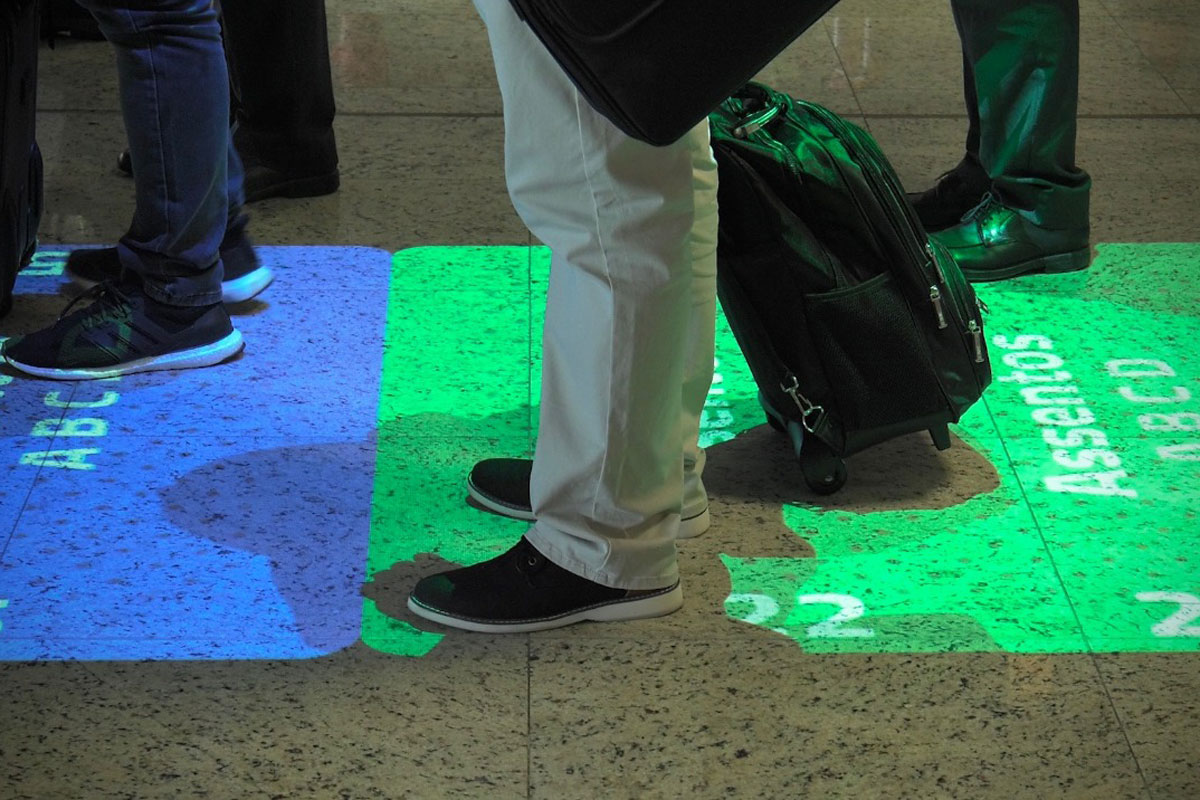 The last 12 months have seen more innovation than you can throw a ‘germ repellent’ suite at.

There have been futuristic ‘formula one’ seat designs floated for business, bunk bed rest stations thought up for economy, and a whole lot of travel industry soul searching as lockdowns left swathes of the earth’s population grounded.

Fitting this theme of innovation nicely, a video has recently bounded across a number of social media news (and meme) aggregators, showing a new airline boarding system in action.

It is not clear which airline is using this ‘blue carpet’ (though reports suggest it may be a Brazilian one, in operation since September 2020). Wherever it has come from, it’s a feature some want to see considered “by every airline.”

What’s so good about it? As the above clip shows, airline boarding gates could be fitted with moving projections on the floor showing passengers how far away they need to be from each other (and how fast they need to move) in the boarding gate line.

It even goes as far as to show passengers’ seat numbers, something that would provide peace of mind (and curtail the potential for ‘cutting in’).

“I live for this kind of organisation…” reads the video’s on-screen text. “Every airline should have this.”

The original clip comes from Instagram account @crosscheck_de and has been reposted by the likes of @todaysyearsold and @pubity.

@pubity wrote of the feature: “A clever way to social distance…”

Comments underneath the video from followers included: “You are my hero” and “Organisation.”

“This is a clever way to board in general, shit’s always a royal battle.”

Not everyone was sold though. “Hahahahahahaha this is stupid and not to mention you all look like cattle doing it,” one Instagram user wrote.

“Imagine thinking you need to social distance, hen sit 4 inches from someone 30 seconds later,” commented another.

“Only for people to just sit near each other on the plane.”

“Wouldn’t work in the US because people will think this violates their freedom,” another chipped in.

RELATED: ‘Infuriating’ Instagram Video Has Americans Up In Arms About Life In Australia

“Then you get on the plane and everyone removes their mask to eat… captain puts covid on pause.”

“Somehow people would still f*ck this up.”

Others quipped certain airlines would never go to such lengths to make for a better customer experience:

“Spirit Air would be more likely to throw a rock at you with your seat number on it.”

While we certainly understand the absurdity of distancing only to (minutes later) not distance, we back this idea purely for its taking the stress out of boarding. Also: some distancing is better than nothing.

Now all we need is an electric fence to stop people clamouring over baggage collection belts, and cattle prods to stop passengers standing in the aisle as soon as the seatbelt light goes off…