It used to be that any conversation about high fashion naturally gravitated towards Europe: the grand couturiers of France, the storied luxury houses of Italy, tailors on London’s Savile Row…

Europe might still be a fashion powerhouse, but it’s no longer the only word in men’s style. DMARGE recently conducted a reader survey about changing perceptions of luxury, and a whopping 80% of you agree that luxury doesn’t have to come from Europe. Just as we recognise that Europe’s not the sole domain of the finer things in life, so too do we observe that the hottest style trends are increasingly coming from places outside of the ‘Old World’.

One men’s style trend that’s being led by designers and snappy dressers outside of Europe is the revival of the leisure suit. While the first leisure suits originated in the 1930s on the US’ West Coast, it was in the 1960s and 1970s that leisure suits became particularly popular, and emerged the form we recognise them as today.

Taking on design cues from the utilitarian safari jacket, safari suits became fashionable thanks to French designers like Ted Lapidus and Yves Saint Laurent championing the look. The style was also picked up by the mod subculture in the UK, as well as by quintessential British men’s style icons of the era such as Roger Moore and the Prince of Wales. In recent years, it’s become somewhat kitsch; a shorthand for sleaze. 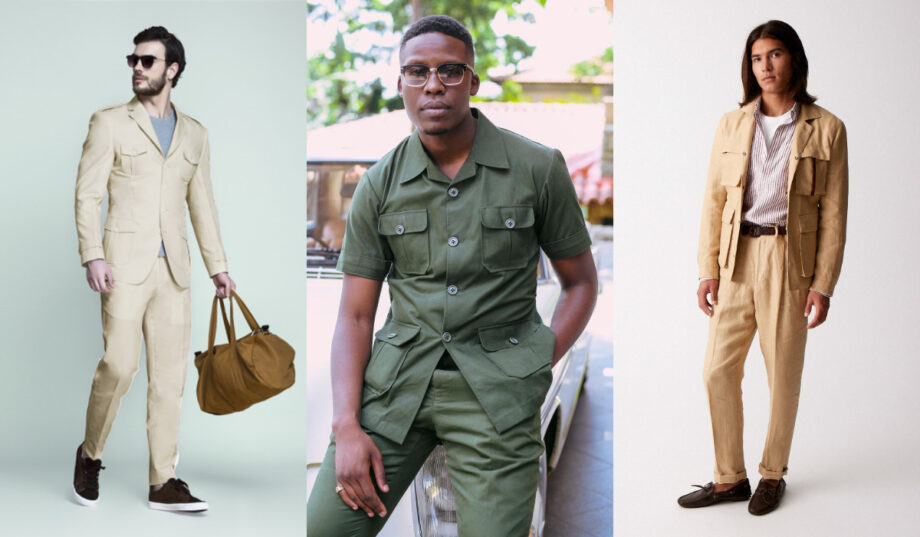 But the modern leisure suit has far more salubrious and less European origins. Because leisure suits are an eminently practical, rather smart warm-weather option, well-dressed gents in Africa and South Asia have long championed the leisure suit, further refining the style and transforming it from something to be mocked to a respectable smart-casual option. Now, Australians are paying attention – and Europe should, too.

Take Australian-founded, South-Africa based tailoring outfit Button Brothers’ leisure suit, which is “inspired by the powerful leaders of the Front Line States who fought for the liberty of many in Africa,” taking design cues from military fatigues worn by revolutionary freedom fighters whilst incorporating soft, breathable cotton.

Another Australian tailor that’s reinvigorating the leisure suit is Patrick Johnson. His take incorporates beautifully-textured linen and nods to the sorts of mountain jackets explorers in the Himalayas would regularly don during mountain expeditions – turning adventure gear into haute couture.

RELATED: Menswear Experts Explain What Will Happen To Australia’s Suit Culture If We Don’t Go Back To Work

For a different take on the leisure suit, one only has to look to US-based tailoring service Hangrr, whose leisure suits throwback to peak American preppy style: small pockets, slim tailoring and a double vent for maximum warm-weather comfort.

The revival of the leisure suit proves something that Australian luxury consumers have known intuitively for many years: that fashion’s epicentre is slowly shifting from Europe and expanding elsewhere. Keep an eye on this trend – and keep your eye out for other men’s style trends emerging outside of Europe.