Think Japan is all about nollies in Niseko and slides in Sapporo? Think again. There’s an offbeat side to The Land Of The Rising Sun many Australians are missing out on: Hokuriku Shinetsu.

If you fancy carving some fresh tracks, the Hokuriku Shinetsu region offers a culturally immersive experience, as well as some of the best snow in Japan (to give just one example, the region is home to Hakuba and Nagano City, the village where the Winter Olympics were held in 1998).

The Hokuriku Shinetsu region is located in the centre of Honshu. Hokuriku Shinetsu is also home to some of the most well-known ski regions within Japan, with numerous easily accessible tourist attractions dotted around it.

However, Australians have a habit of heading to Japan’s north island to ski – something which requires another flight (and logistical battle) after touching down in Tokyo.

We also tend to get our ‘foodie’ and nightlife fix in Tokyo. But in doing so we miss out on a lot.

In the Hokuriku Shinetsu region, a world of opportunity awaits, with various ski options and sightseeing experiences beckoning world-savvy travellers.

Sound like you? Get in early, before the masses cotton onto it. Hokuriku Shinetsu has more attractions than you can throw a steaming Onsen at, including a bunch of cosmopolitan (and ancient) fun.

Here’s a breakdown of some of Hokuriku Shinetsu’s top attractions.

Nagano City has a lot to offer international tourists.

Getting to Nagano City is straightforward. The easiest option for international travellers is usually to take a bullet train from Tokyo (a one-way trip takes 80-100 minutes, and costs about 8,000 yen). It is also accessible from Osaka (again, travelling by train tends to be best). From Osaka the train journey is more like five hours. 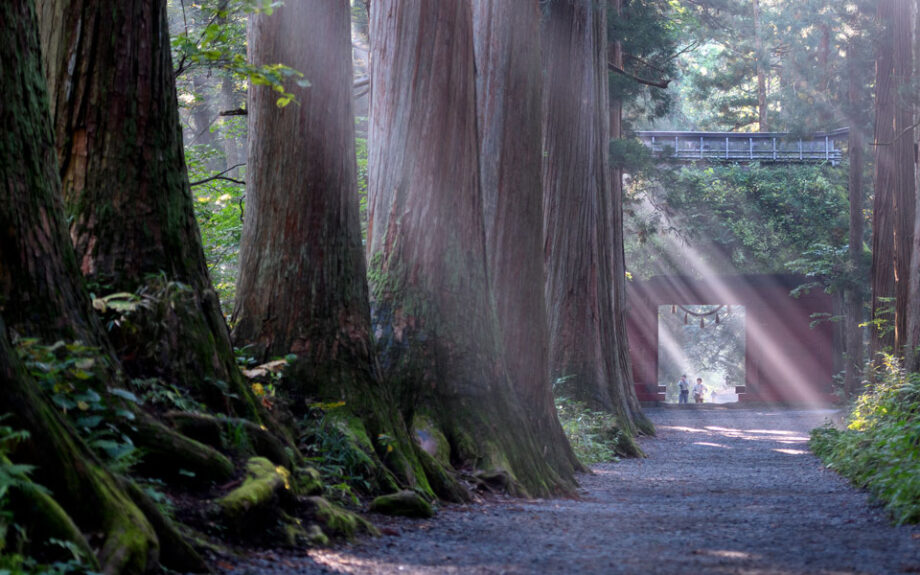 If 800-year-old cedars are your jam, and you are up for an authentic spiritual walk in Nagano City, then the Togakushi Shrine should be on your ‘to do’ list.

Togakushi Shrine is one of the most sacred places for pilgrimage in Japan. The sanctuary has a long history and was founded about 2,000 years ago at the foot of Mount Togakushi, where Ama-no-Iwato (heavenly rock cave) is said to have been born in the age of Japanese mythology.

The Five Shrine Tour in the midst of nature is very popular and gives visitors the chance to experience the sacred natural power of the spiritual sanctuary (just what you need to rejuvenate after your flight).

To get there, take the Arpico Kotsu bus, about 1 hour from Nagano Station, platform 7. 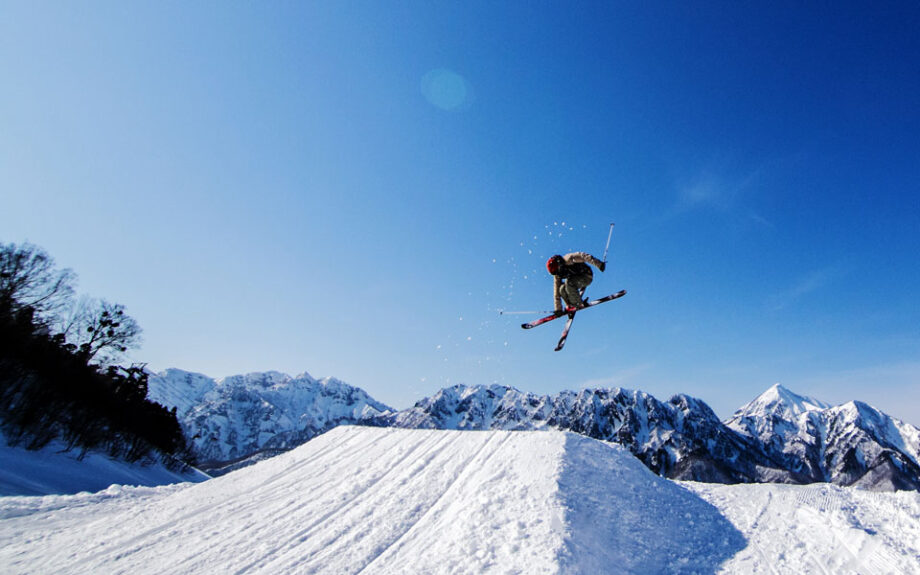 It’s not just spiritual enlightenment that may await in Togakushi. You can get some serious air beneath your feet (and board) too, without even going further than 60 minutes from the city centre. Talk about convenience. Located just one hour by bus from the centre of Nagano City, Togakushi Ski Resort is located near the Togakushi Shrine.

The 19 courses provide skiers and snowboarders with a wide variety of terrain to meet the needs of everyone from beginners and families to experts. The powder snow is strikingly light, and the view of the Togakushi mountain range never gets old.

Access can be found via Tokyo International Airport (Haneda) via a Train (2 hours 40 minutes) to Nagano Station and then a bus (80 minutes) to Togakushi Snow World. 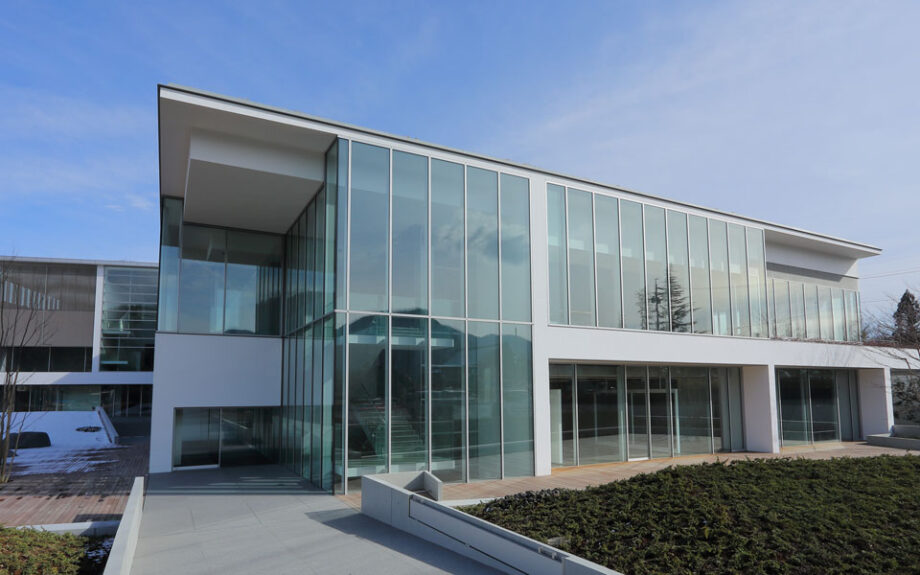 Looking to get a bit artsy? Look no further than the Nagano Prefectural Art Museum. The Gallery houses 960 works by Japanese painter Kaii Higashiyama and it’s not just the artworks that are iconic. The Gallery itself was designed in 1990 by Yoshio Taniguchi, a world-renowned architect who also designed the New Museum of Modern Art in New York and GINZA SIX. It was renovated in 2019 and, if you like peaceful, natural paintings is well worth the 500 yen admission price. 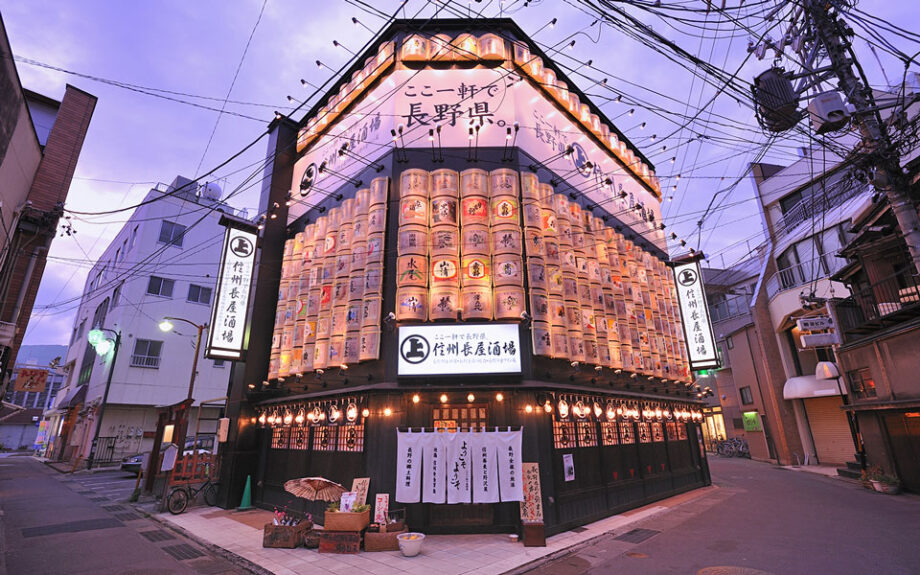 If you needed another reason to make Nagano the base of your stay; here it is. Shinshu Nagaya Ba is the place to be if you want to tickle your tastebuds with local cuisine.

The region has a rich natural environment, pure water, and a climate with a wide range of temperature differences. A rich food culture is the result. There are 80 saké breweries in Nagano Prefecture, making it one of the foremost saké producing areas in Japan, and it’s also famous for its soba noodles.

Nagano’s Togakushi soba is one of the three best in Japan.

Palette piqued? At Shinshu Nagaya Sakaba, you can enjoy a wide selection of local saké from 72 breweries in Nagano Prefecture, and Togakushi soba, and a wide variety of local dishes such as local sausages, horse sashimi, wild plants (sansai), and tofu. 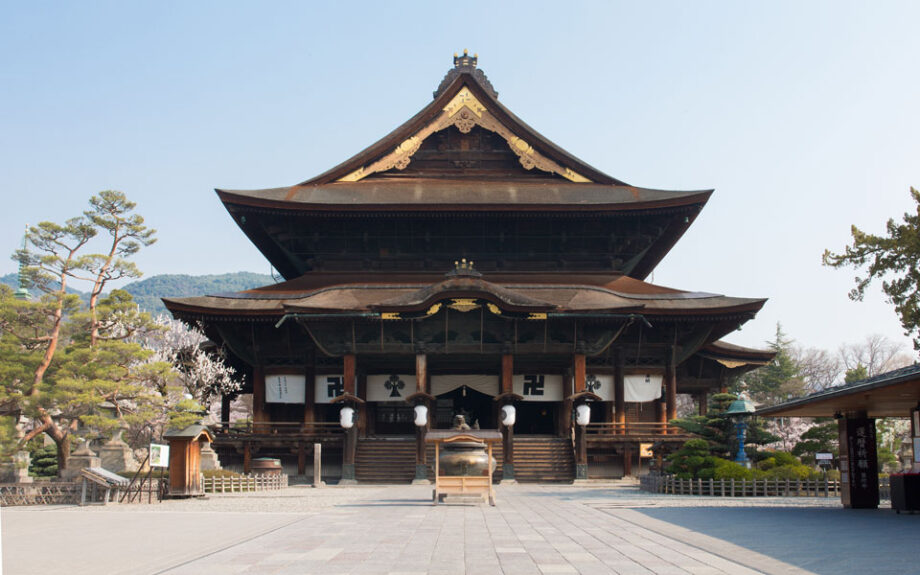 The Zenkoji Temple temple is said to have been founded in the 7th century and has a history of nearly 1,400 years. It is one of Japan’s chief pilgrimage sites.

“Visit Zenkoji Temple at least once in your life” has been a tradition since the Edo period (1603 – 1868) – the final period of what is known as traditional Japan.

The temple is a special sanctuary in the centre of Nagano. It is said that once you visit it you will be promised a life of paradise. While we can’t quite guarantee that – if you’re staying in Nagano City, what have you got to lose?

Be sure to get there while the birds are still chirping to witness the local monks perform their famous morning prayer service (called, Oasaji). Another tip is to allow a few hours to give yourself enough time to soak up everything the temple has to offer.

Another interesting point to note, especially in these conflicted global times, is that the temple is quite unique in that it is not affiliated with a specific religious sect.

Zenkoji is accessible on foot, by bus or by local train from Nagano Station, a transport hub with links to Nagoya and Tokyo.

The Nagano City tourist information site can be found here. 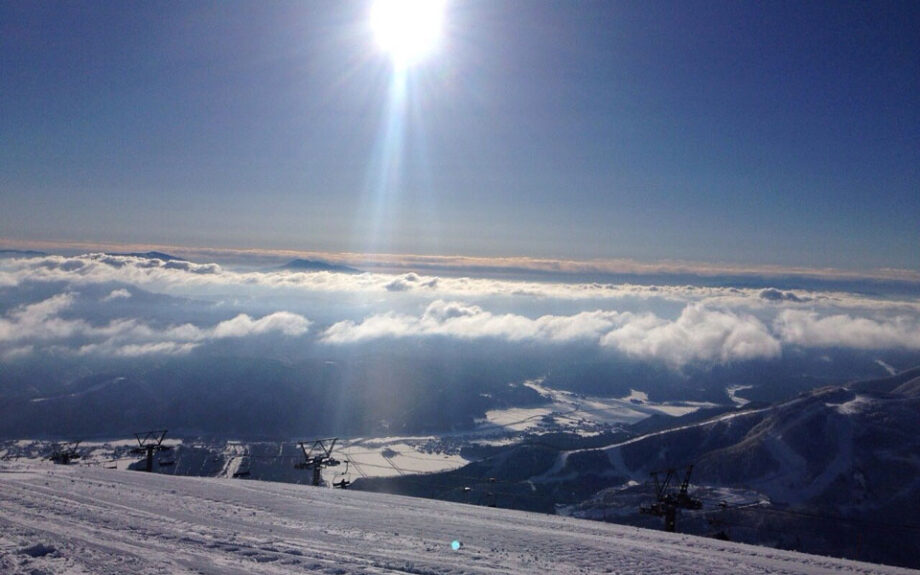 Image: Hakuba Happo One Ski Resort. Above the clouds.

Hakuba Happo One, the site of the 1998 Nagano Winter Olympics, is a world-famous powder snow slope offering 16 different faces to work your skills on. It also has a ski and snowboard school, an off-piste area (it seems some Australian trends are catching on) and locally produced on-mountain food.

There is also lots of vertical scale at Hakuba Happo One, so even when conditions are not pristine at the base of the mountain you can often enjoy impeccable snow on the upper slopes.

Situated just 1 hour and 20 minutes by bus from the centre of Nagano City, Hakuba Happo One Ski Resort is also accessible by car or train.

Kanazawa, the capital of Ishikawa Prefecture, on Japan’s central Honshu Island, is a three and a half-hour drive west of Nagano (2 hours and 45 minutes west of Hakuba). It’s known for well-preserved Edo-era districts, art museums and regional handicrafts.

Tokyo and Kanazawa are directly connected by the JR Hokuriku Shinkansen. The one-way ride takes two and a half to three hours, costs around 14,000 yen and is covered by the Japan Rail Pass and Hokuriku Arch Pass.

You can also go by bus, but it takes significantly longer. A one way trip between Tokyo and Kanazawa by highway bus takes about 7-8 hours and costs around 6,000 to 8,000 yen. 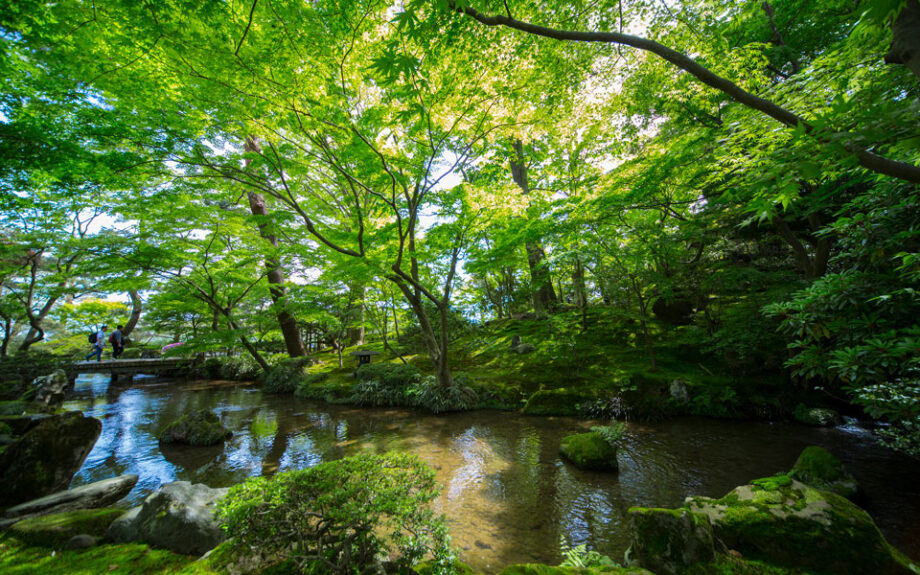 A garden that will make you want to gently whistle (both out of being impressed, and out of revelling in the serenity), Kenrokuen Garden is one of the most famous pond gardens of the Edo period. It’s one of the three most beautiful gardens in Japan (along with Mito Kairakuen Garden and Okayama Korakuen Garden) and you’ll find it in the centre of Kanazawa City.

The Kenrokuen Garden is a place where you can live in the moment, and enjoy the beauty of the four seasons. The name Kenrokuen means “having six factors.” These six factors are: spaciousness, tranquillity, artifice, antiquity, water sources and magnificent views.

The garden comprises 11.4 hectares and is located on the heights of the central part of Kanazawa next to Kanazawa Castle. If you visit, one of Kenrokuen Garden’s most picturesque attractions is its large artificial pond called Kasumigaike. 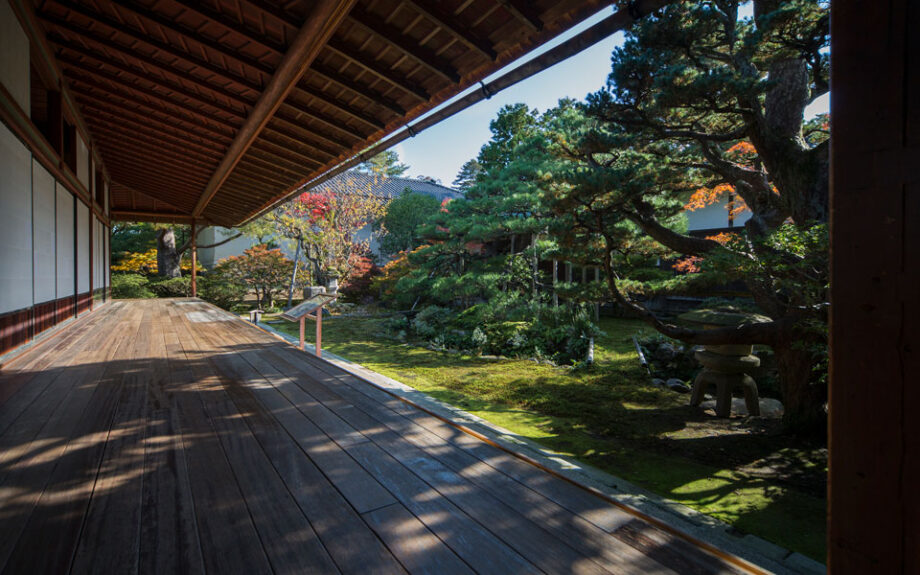 Ever felt like visiting a Samurai villa replete with Edo period decorations? This is your chance. Seisonkaku is an important property with cultural significance to Japan, built in 1863, where you can get a taste for the wealth the Kaga region attained during the early rule of the Maeda clan and the artisan culture they promoted over the following three centuries.

To get there take the bus from Kanazawa Station Kenrokuen Gate. Address: 1-2 Kenrokumachi, Kanazawa, Ishikawa Prefecture 920-0936. 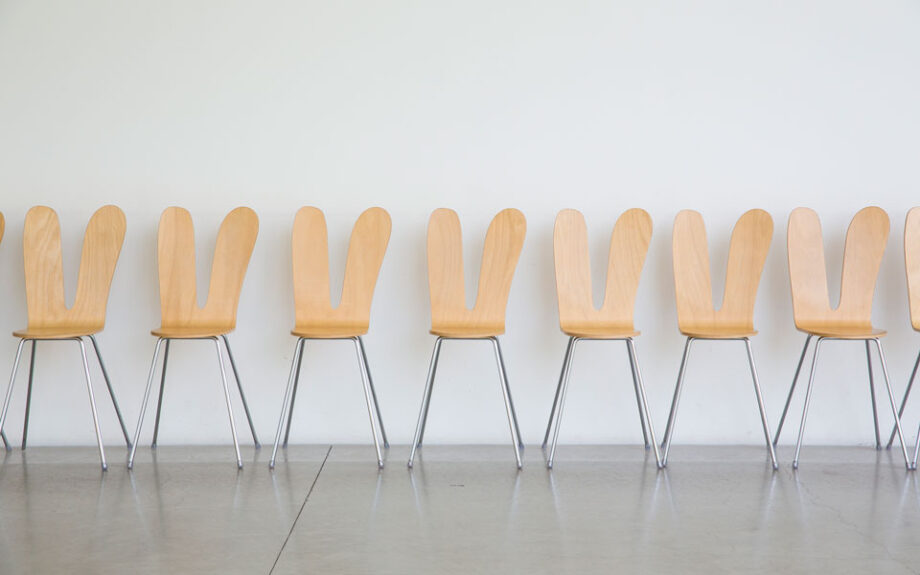 If you didn’t get your fix of art in Nagano, and are still hankering for some haute couture in Kanazawa, this one’s for you. The museum has received various awards, including the Golden Lion at the 2004 Venice Biennale of Architecture and The Pritzker Architecture Prize in 2010.

It opened in 2004, designed by Kazuyo Sejima + Ryue Nishizawa (SANAA), world-renowned architects who have toiled on major museum buildings in the last few years, including the Louvre Lens (Reims, France) and the New Museum (New York, USA). The cornerstone piece of art is Leandro Erlich’s swimming pool. 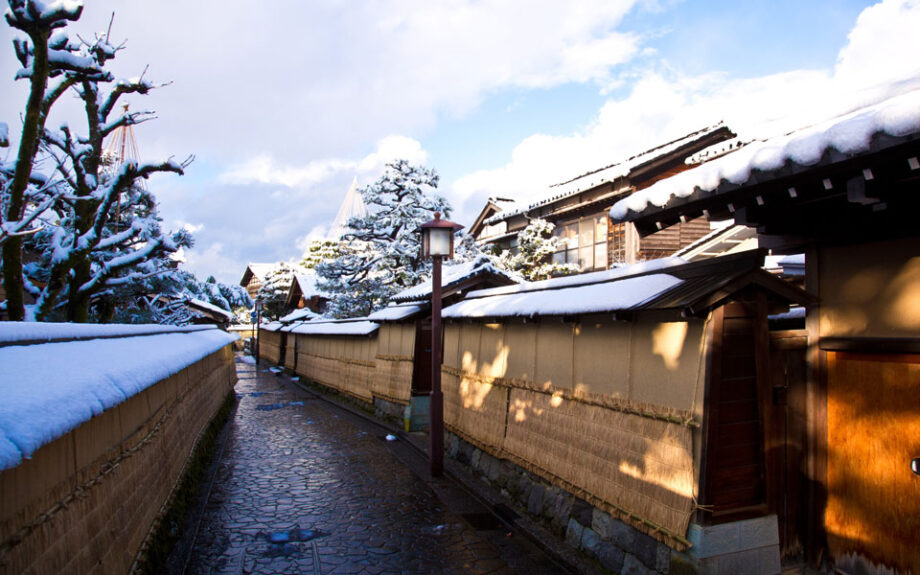 Southeast of Kanazawa Castle is the Nagamachi Samurai District – a neighbourhood where the Samurai of the awe-inspiring Maeda clan (the rulers of Kanazawa and the old Kaga Domain) used to live. Want to visit? Take a stroll back in time, visit an archetypal samurai house and see the city’s oldest canal while you’re at it.

As for directions: from the Ishikawa gate of Kanazawa Castle, the Nagamachi Samurai District is a 10-minute walk. Get there by bus from Kanazawa Station. Both the Kanazawa loop bus and JR buses stop at Korinbo. Nagamachi is a five-minute walk from there. 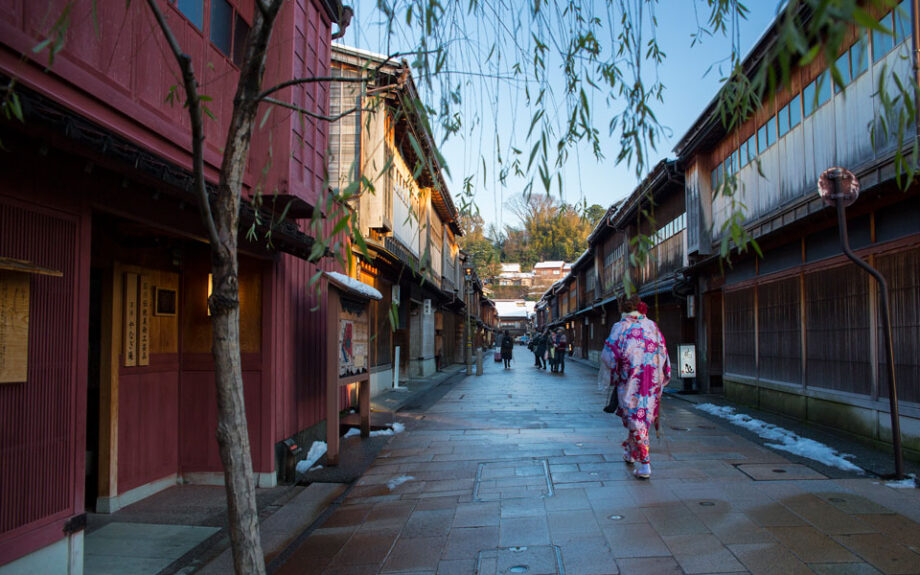 No visit to Kanazawa would be complete without a trip to the Higashi Chaya district. One of the most popular sightseeing areas in the city, the Higashi Chaya district is known for its teahouses and gold leaf crafts. Some of the buildings date back to 1820, and the history of about 200 years lives on, ready to be embraced (ideally with your hands around a warm cup of tea).

The right loop of the Kanazawa loop bus will take you to The Higashi Chaya District. It takes about 10 minutes from Kanazawa Station. Get off at Hashibacho bus stop (number RL4), from where the district can be reached via a five-minute walk. 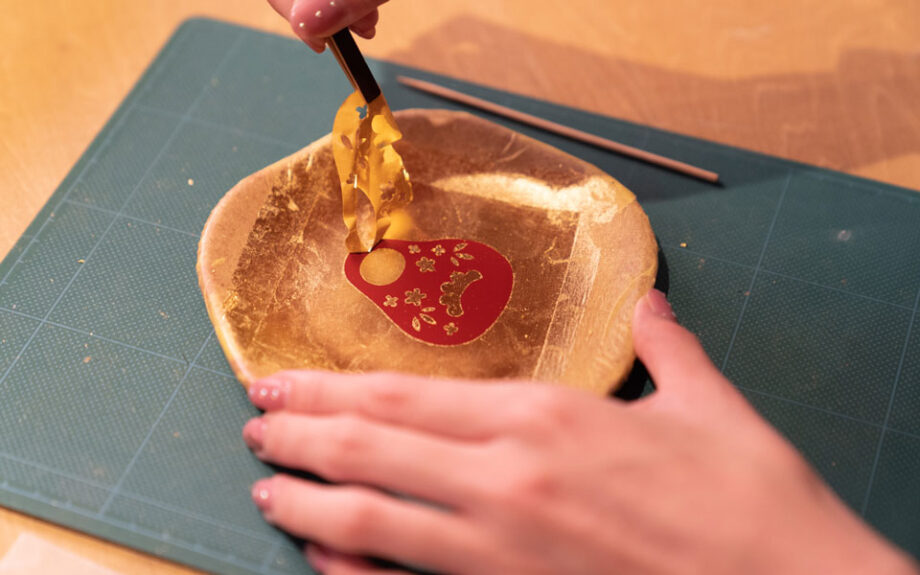 Kanazawa is responsible for more than 99% of Japan’s gold leaf production. Gold leaf production started, it is said, in Kanazawa around 1593. Experience the traditional techniques passed down through the generations over the last 400 odd years for yourself by going to a quality tourist facility like the one at Bikazariasano. 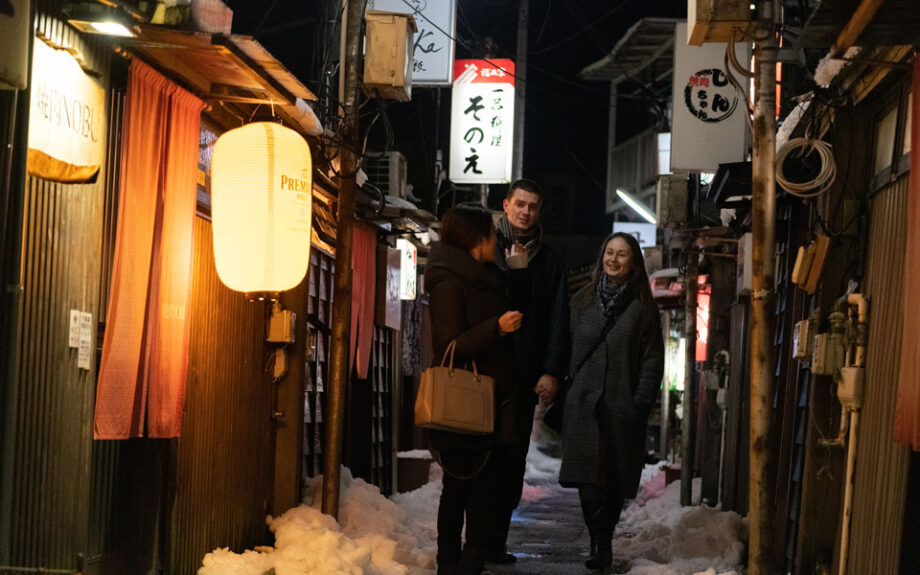 What better way to round off your trip to Japan than with a night of bar hopping? Food, history and culture lovers will adore this tour, which will take you to izakaya (Japanese-style pubs) that serve local foods like fresh fish, sake, and traditional vegetables of Kanazawa. It will also take you to Kanazawa Central Gastronomic Street, a drinking area that harks back to the Showa era (1926-1989) and has the ambience to match.

Local guides will take you to their top picks, depending on your preferences. They will teach you how to enjoy the quintessential drinks and cuisine of Kanazawa, starting with a sake toast in a quaint, counter-only restaurant (where you can chat to the owner over the bar).

The Kanazawa City tourist information site can be found here.

The number of foreign visitors discovering the joys of the Hokuriku Shinetsu region has been steadily increasing in recent years. The time is ripe for Australians to get in on the action.

Not only is it convenient for skiers and snowboarders who don’t like spending excessive hours in transit, but it also has world-famous snow, and an unbeatable cultural experience to boot.

After racing down the slopes, you can enjoy the rich history, art, and food culture of Japan (beyond just Tokyo).

Be part of the discovery.