As the highest-paid basketball player of all time, LeBron James is hardly short on scratch.

Last year alone, the GOAT dropped over $2 million on a rare Porsche 918 Spyder, several hundred thousand dollars on multiple Richard Mille watches, as well as countless thousands on designer clothes and accessories like this Louis Vuitton bag. In short: he’s not afraid to splash his cash.

…Which makes his latest horological flex all the more surprising. The 36-year-old Los Angeles Lakers small forward stepped out in a colourful COMME des GARÇONS outfit ahead of the Laker’s game against the Phoenix Suns last week, with a rather understated – for him, at least – Rolex Oyster Perpetual 41mm ‘Coral Red’ (ref. 124300-0007) on his wrist. 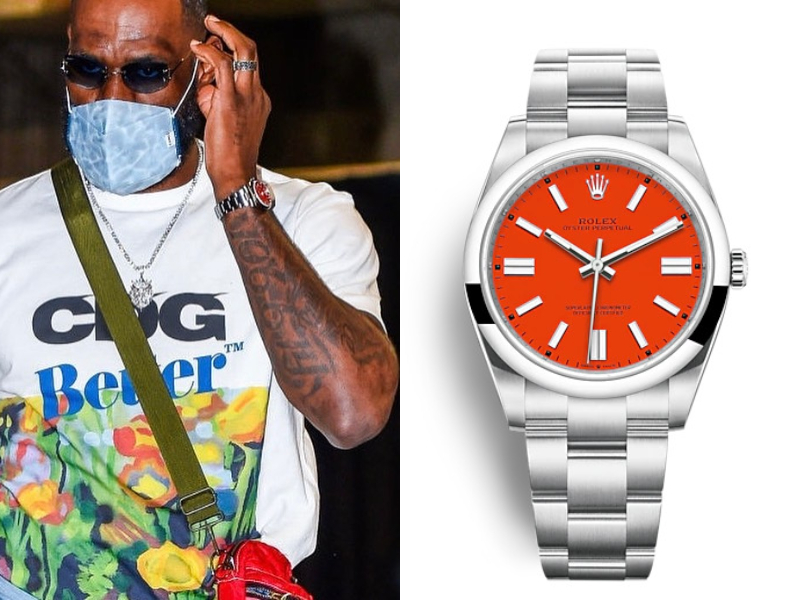 When your watch matches your bag…

Rolex made waves last year when they revealed a suite of colourful new lacquer dials for their entry-level Oyster Perpetual collection. Initially offered only on the 36mm Oyster Perpetual, the colours included candy pink, turquoise blue, yellow, green and coral red – the latter of which LeBron has opted for, on the larger 41mm Oyster Perpetual.

The introduction of these colourful dials was passionately welcomed by Rolex fans: there’s just something very appealing about the clash of the bright colours with the classic, somewhat conservative design of the Oyster Perpetual. It also helps that as Rolex’s entry-level watch, they’re comparatively quite affordable (at retail, at least – good luck getting your hands on one for RRP, however). James’ retails for around 6,000 USD.

The Lakers went down 104-114 to the Suns last week, and also narrowly lost 120-123 against the Sacramento Kings last week, too. Their next game is against the Indiana Pacers on Friday at the Staples Centre in LA on Friday.