Not only do the big sportswear brands like Adidas, Nike and New Balance started to offer ‘luxury’ versions of their mass-market sneakers – models made with premium materials or in countries like England or Italy – but even the traditional luxury brands have got in on the game, with fashion houses such as Balenciaga, Christian Dior and Louis Vuitton centring entire campaigns around their sneaker lines.

Ten years ago, most Australians would have scoffed at the prospect of spending hundreds if not thousands on sneakers. Now, it’s become normalised – or at least, not out of the ordinary. But a new trend’s emerged among Australian luxury consumers that even the most open-minded average Aussie might find somewhat strange: the rise of ‘pre-abused’ luxury sneakers.

Designers like Gucci, Maison Margiela and Rick Owens have started selling sneakers that are pre-worn or distressed from the factory. Think hand-applied scuff marks, frayed fabric, stained laces or deliberate imperfections. Italian brand Golden Goose is perhaps the most notable proponent of this trend: virtually all Golden Goose sneakers come ‘pre-distressed’ from the factory.

But the idea of spending hundreds – if not thousands – on sneakers that look like they were found in a tip? It’s quite a controversial look. Indeed, we put it to our Instagram audience, using a pair of Golden Goose White Limited Edition LAB Stardan sneakers that retail for $890 as an example. The results were pretty clear: they’re not a fan. So why are more and more Australian luxury consumers getting in on this trend? 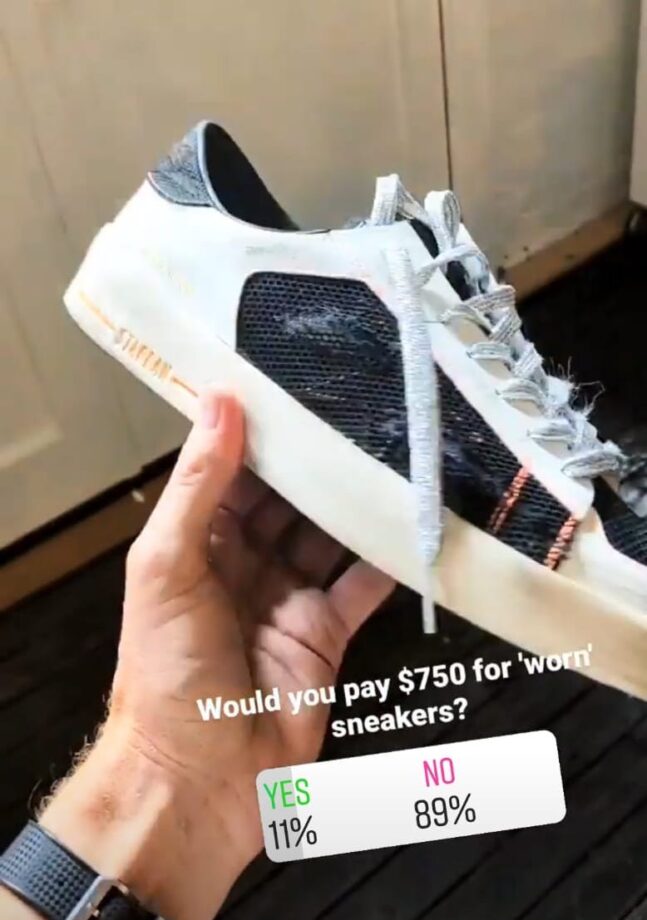 It’s partially about individuality. Distressed sneakers, even those that come from the factory distressed, look and feel more ‘unique’ than a pair of unmolested sneakers. Of course, sneakers will develop their own character as they’re worn, but what’s wrong with speeding up the process?

Ask most sneakerheads, and they’ll say some sneakers like white Nike Air Force 1s or Converse Chuck Taylor All-Stars actually look better when they’re a bit worn. A more Australian example of this school of thought has to do with the classic R.M. Williams Craftsman boot: wearing pristine RMs is considered a real faux pas; they’re not respectable until they’re broken in.

Hell, the trend’s popularity in Australia be might be a byproduct of the ‘tall poppy syndrome’ that permeates Australian culture. We don’t as readily celebrate wealth as other cultures do. Indeed, wearing designer brands is more likely to attract scorn than praise. So maybe wearing distressed luxury goods makes you look more lowkey? ‘Fake it till you make it’, we suppose.

The idea of selling ‘factory distressed’ goods is nothing new. Guitar makers have been doing it for years: selling electric guitars with deliberately faded paint and vintage-spec hardware in order to aesthetically emulate (and in some instances, sonically emulate) genuinely ‘road-worn’ guitars. But fashion is a whole other ball game: unlike guitars, there’s no ‘practical’ benefit to owning distressed sneakers. The opposite, if anything.

Some critics of the trend have said that it glamorises or trivialises poverty. Others think it’s just trashy – pun entirely intended.

Poverty is not a fucking costume, Nordstrom. $2200 to look like you’ve been keeping the same pair of sneakers repaired for 6 years. Some people have to do this, you fucks. It’s like ‘Direlicte’ from ‘Zoolander’ but for real. https://t.co/DoZgjTXkxn

We wonder what the go is with reselling distressed sneakers, though. Normally you can only sell mint condition sneakers on the big marketplaces like StockX or at consignment stores, but how can you tell with Golden Gooses (Geese?)