Sneaker resellers, like used car salesmen or real estate agents, have to be some of the most despised professionals in the world.

For the average sneaker fan, it’s already a difficult and expensive endeavour trying to get your hands on limited edition creps in between the different sportswear brands’ cryptic release schedules, stock allocation strategies and long queues at brick-and-mortar stores. Cashed-up, highly organised resellers who hit online stores with ‘bots’ – programs with inhuman reaction times that instantly snap up sneaker stock – or get items ‘backdoored’ to them at retail locations just make the hobby even harder.

It’s an unspoken truth in the sneaker world that many of these big resellers often benefit from insider information or relationships with brands or retailers – you don’t end up with a pallet of Yeezys in your garage without knowing someone or doing something dodgy (usually). But most people turn a blind eye; it’s just an uncomfortable aspect of the hobby. But one particularly egregious reseller has caused a full-blown corporate scandal, thanks to his rather convenient family connection.

Ann Hebert, a senior Nike employee of 25 years, has stepped down from her role as Vice-President/General Manager for North America after a Bloomberg article revealed that her 19-year-old son runs a lucrative sneaker reselling business named West Coast Streetwear – immediately sparking outrage online.

“Nike does not permit its employees to participate in sneaker reselling, and the practice of buying shoes at their retail price only to sell them at a higher price is still taboo to many collectors… commenters questioned whether [the son] was gaining unfair access to limited-edition sneakers with the help of his mother,” Complex reports. 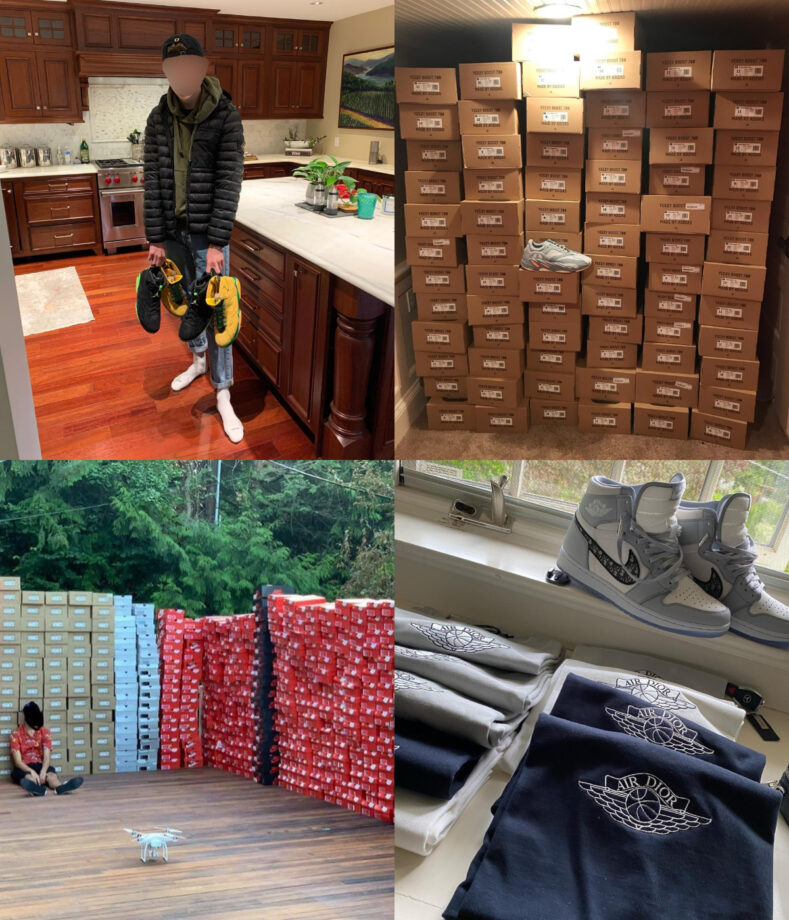 Clockwise from top left: Son with two pairs of limited edition University of Oregon Nike Air Jordans, a ‘haul’ of Adidas Yeezy 700s, Son showing off items from the coveted Jordan x Dior collaboration, Son with a mountain of sneakers from a variety of brands. Images: @west.coast.streetwear

While Ann had previously disclosed information about the business to her employer in 2018 and Nike is satisfied that Ann hasn’t directly helped her son, it’s more than a little suspicious. Clearly, her resignation comes in light of the Bloomberg article, which has also prompted her son to go dark on social media and update his shopfront to only listing Supreme t-shirts rather than any sneakers.

It’s a particularly bad look for Ann, as it was under her purview that Nike’s SNKRS app was released, which was designed to curtail the influence of sneakers and their botting programs. That her son has been so brazenly using bots to amass his stockpile of rare sneakers smacks of hypocrisy.

Needless to say, Joe’s social media has been absolutely inundated with comments from angry sneakerheads.

“You are by definition the biggest scammer of all time,” one wrote on Instagram, with legions of others simply calling him a “clown”. The savage comments culminated in this:

“Your mom loses her job because of your beyond shady business. What’s the most popular kicks in jail??”