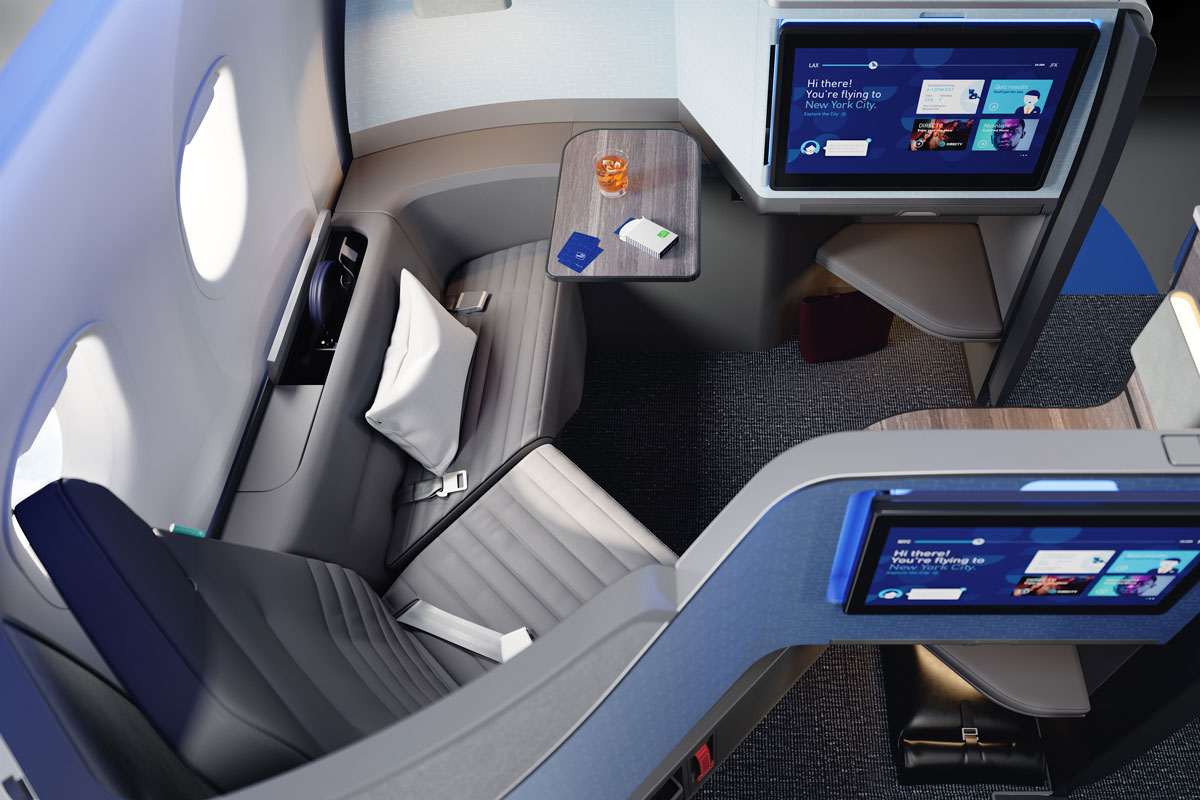 Let’s face it: there are a lot of reasons not to fly right now. From fluid border situations to heightened costs (not to mention travel shaming), it’s never been easier to stay at home.

But there could now be a reason to get clicking again: the following business class seat. Introducing: JetBlue’s new Mint Studio offering, a gamechanger that turns into one of the largest beds in the skies.

Passengers will find this massive bed on JetBlue’s much anticipated Airbus A321LR jets, which will go into service on JetBlue’s first transatlantic route between New York and London (slated to begin in a few month’s time).

As CNN Travel reports, JetBlue’s new Mint Studio, “consists of two mini-rooms at the front of its newest planes, each with a comfortable seat that turns into its own fully flat bed behind a privacy door with an adjoining sofa.”

“Behind those come 22 Mint Suites, minus the adjoining sofa.”

Various design flexes add to the Mint Studio (and Mint Suite’s) enticement factor. They feature wireless charging, various power points, and space to watch videos on your tablet while eating.

Even more enticing: according to CNN Travel, “if JetBlue stays true to form, the pricing for these new offerings will make it within reach of more travellers than ever.”

The two Mint Studios will have bigger screens than the 22 Mint Suites behind them (a 22″ Thales AVANT seatback screen, to be precise) as well as an extra side table and a guest seat that can accommodate an extra customer during the flight (but not during takeoff and landing).

It remains to be seen if the Mint Studios’ bed is as wide as, say Singapore Airlines’ 30-inch wide business class bed (if it was we’re sure they would have announced it). But when it comes to the US market they certainly come up trumps.

The Mint Suites aren’t too shabby either. Though they are smaller, they still feature wireless charging, more power points than you can throw an iPhone at, space to use your tablet while eating, a Tuft & Needle mattress, and an architect’s eye for detail.

“Mint was an idea to make premium travel across the U.S. less stuffy and more affordable, and its performance has exceeded even our most optimistic expectations of going beyond New York, Los Angeles and San Francisco,” said Joanna Geraghty, president and chief operating officer, JetBlue, in a media release.

“It’s remarkable how Mint’s thoughtful design has resonated with customers as we successfully grew it to more than 30 routes. We put our heart into this redesign of Mint and were inspired by our original vision of offering customers an exceptional experience at a lower fare – which is what JetBlue is all about.”

As Forbes reports, the tasty details don’t end there: travellers should also be able to surf the airline’s free high-speed Wi-Fi in flight – this set up is designed for the ‘constantly connected’ traveller.

“Although there is no word yet on pricing or exact launch dates for the new Mint, presumably this is JetBlue’s bid to disrupt the lucrative New York-London route business-heavy market, just as the airline did when it began flying Mint between New York and the West Coast several years ago,” (Forbes).

“While the introduction of a new all-suites business-class cabin might have by itself to do so, the prospect of relatively inexpensive fares makes this new all the more exciting.”

Some aviation writers have called the suites “hardly groundbreaking” and some Instagram commenters have claimed “every airline who ever had this got rid of it pretty quickly.” It looks tasty to us though.

What fate lies JetBlue’s new offering? Only time (and ticket sales) will tell…