LeBron James has always been a big fan of biking.

He might be the GOAT when it comes to basketball but he’s always had an affinity for two wheels: he’s known for cycling to and from practice and has championed a number of charitable pursuits revolving around cycling. He used to hold an annual ‘Bikeathon’ in his hometown of Akron, Ohio, where he’d give out dozens of bikes, and has a number of custom-made cycles in his collection.

It seems he’s a fan of motorbikes, too – or at least the way bikers dress. The 36-year-old LA Lakers lynchpin was spotted wearing a rather dapper John Elliott leather biker’s jacket ahead of their game against the Washington Wizards yesterday, idiosyncratically pairing the black jacket with a colourful rayon shirt, Louis Vuitton sunglasses and plenty of gold bling. 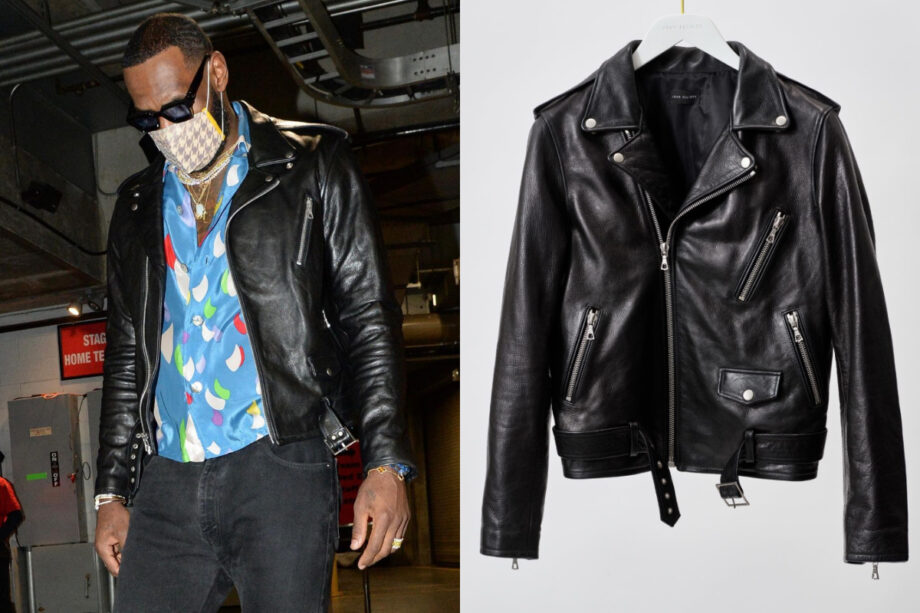 This striking ‘Leather Moto Jacket‘ is the flagship item from Elliott’s recently-dropped SS2021 collection, which also features plenty of workwear looks, raw denim and classic Americana. Elliott’s focus on quality basics and timeless fashion has blessed the LA-based fashion designer with a dedicated cult following – although it was a savvy move on his behalf to gift LeBron one of his jackets ahead of the collection’s release.

Celebrity endorsement aside, Elliott’s rendition of the classic leather jacket is particularly stylish, and a must-have for any man looking to level up their wardrobe. That it’s made in LA from premium materials is an added bonus – you want your leather jacket to last.

RELATED: ‘All American’ Style Tipped To Take 2021 By Storm

It’s not the first time James has collaborated with Elliott. John Elliott, The pair teamed up with sportswear giant Nike on a three-way collaborative capsule back in 2018 which included hoodies, athletic apparel and a minimalist basketball sneaker, the NikeLab Lebron James x John Elliot Icon.

LeBron and the Lakers with face off against the Utah Jazz tomorrow in Salt Lake City. The momentum is with the Jazz, who handily beat the Charlotte Hornets in their last game, whereas the Lakers lost narrowly to the Wizards.