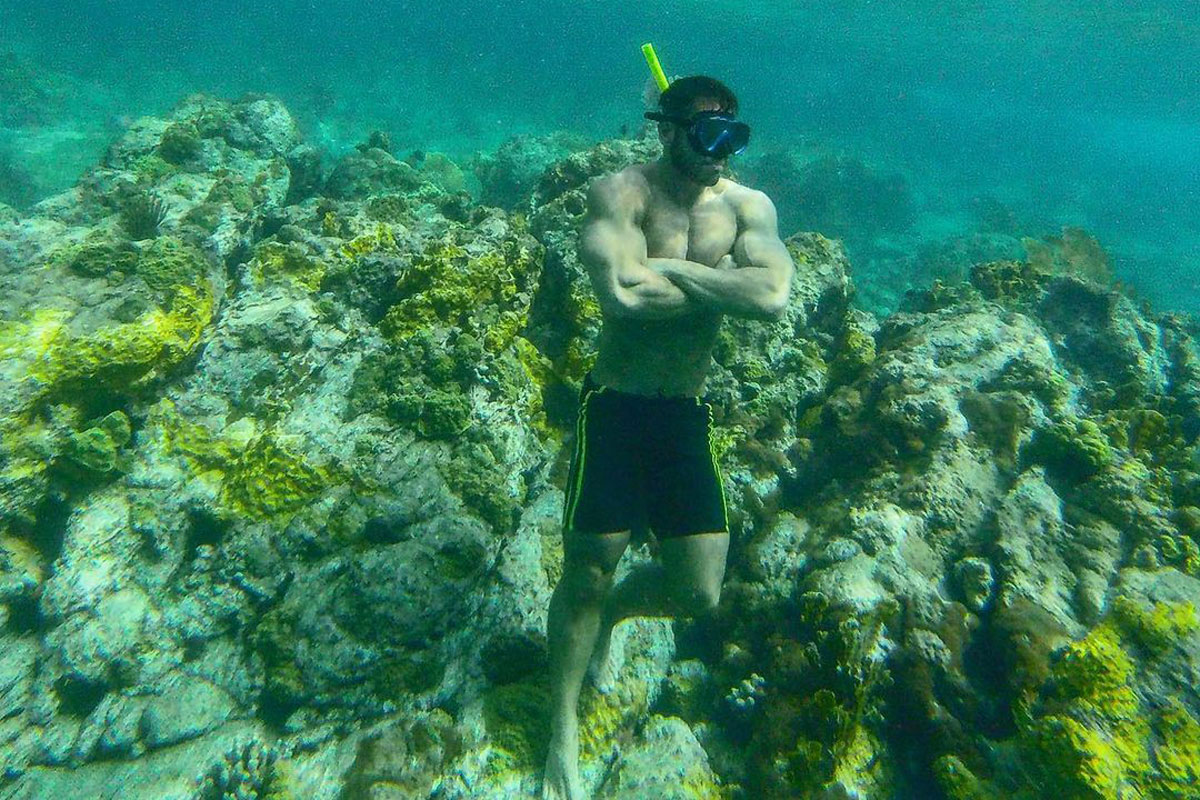 Ross Edgley edged his way into the public consciousness when he appeared on the Joe Rogan podcast in 2018.

Like an Arctic explorer from times gone by, Edgley represented some kind of ancestral force of grit, sharing how he swam around the UK, did marathons tied to cars, swam channels attached to tree trunks, and more.

In doing so, he also supplanted a certain sense of inadequacy (the more positive among you might call it inspiration) in many people’s heads (particularly this coffee-addicted, sedentary author’s). Why aren’t I doing that? Where’s my world record feat? Etc.

Fortunately, even if you are a 9-5 office worker, you can still learn from Edgley’s insights – the man seems to publish a new book every two years, from The World’s Fittest Book (published in 2018) to the more recent The Art Of Resilience (published in 2020).

Speaking of resilience, and offbeat training techniques, Edgley recently took to Instagram to share a training method that the average gym warrior is probably not using: hypoxia. Though this technique is associated with big wave surfers and endurance athletes more so than weight lifters, Edgley reckons it can be good for your gains as well as fitness.

Why? Because he works off an all-encompassing philosophy. In other words: Edgley believes everything is interconnected (and, to be fair, he has the muscles, and literary citations to back it up).

RELATED: Cardio Is The Unlikely Key To Building Muscle, This Insane British Strongman Proves Why

“Breath-Holding (hypoxia) GAINZ. Old picture, but in lockdown I’m taking the opportunity to learn some new tricks to add to the strength and conditioning toolbox. Massive thanks to the freediving BROSEIDON king that is @willtrubridge for the tips and tricks,” Edgely captioned the post.

“Train everywhere and anywhere, everything and anything.”

Though some Instagram commenters were quick to throw in their two cents about safety (“suggest people start with a hypoxia app before doing breath holds under water. You tend to avoid shallow water blackouts if you’re on dry land”) others were inspired by the post.

A study from volume four, issue four of the Journal of Sport and Health Science states, “Several aspects related to endurance performance may be altered by hypoxic exposure and training including increases in erythrocyte volume, maximal aerobic exercise capacity, capillary density, and economy.”

“In the modern era of sport, increasingly sophisticated anti-doping controls, such as the World Anti-Doping Agency (WADA) biological passport program, leave elite athletes with few choices of legal ergogenic aids that have the potential to substantially improve performance, and altitude/hypoxic training is among them.”

“The efficacy of altitude/hypoxic training and the best practices for its use are still being debated in research circles, while athletes congregate in altitude training camps and use altitude simulation devices in the pursuit of improved exercise performance.”

It’s also important not to jump in and improvise your own ‘hypoxia’ but rather work with trustworthy professionals to achieve your aims. As Healthline reports, “It may be tempting to hold your breath during weight lifting – don’t!”

“Making a habit of holding your breath can cause your blood pressure to rise, possibly resulting in dizziness, nausea or even a heart attack. Instead, use your exercise as a time to practice deep breaths.”

This is not the only endurance training spruiking post Edgley has shared lately on Insatgram. On Tuesday Edgley shared an excerpt from The Art Of Resilience on how to “build a big gas tank.”

“In #TheArtOfResilience… I talk a lot about ‘getting wintered’ but it’s not all ice baths and mud runs, it’s also about long, slow, arduous miles to bring about many adaptations within the body that improve the cardiorespiratory system.”

“One of the most well documented of these welcome adaptations is a stronger heart since we’ve known for a long time that endurance training enables our hearts to grow bigger and stronger.”

“According to the Olympic Textbook of Medicine in Sport this was first described in 1899 when the Swedish physician S. Henschen noted that cross-country skiers had larger hearts than the average person, a phenomenon thought to result from adaptation to long-term aerobic exercise. In summary, don’t underestimate this period of your training and part of your year.”