Not only is the 42-year-old crooner an immensely talented multi-instrumentalist, producer and EGOT (i.e. an Emmy, Grammy, Oscar and Tony winner) but when he’s not making other men look totally inadequate on Valentine’s Day, he’s also one of the most fashionable male celebrities on the planet, serving up style inspiration even more powerful than his singing voice.

In particular, he’s a big fan of summery looks, like this resort style’ suit and boat shoes combo he wore during a Good Morning America performance or this ‘world’s best wallpaper’ outfit on Jimmy Kimmel.

He’s kept that patterned vibe going with his latest shirt, however: one that we’re pretty confident will be the shirt of summer this year. Spotted leaving Wolfgang Puck’s restaurant at Los Angeles’ iconic Hotel Bel-Air earlier this week, Legend looked like – well, a legend – in Gucci’s ‘Star Print Silk Oversize Bowling Shirt’ (not the most glamorous name, but there we are), keeping the rest of the fit monochromatic with only a pop of gold from the Audemars Piguet Royal Oak on his wrist standing out otherwise. 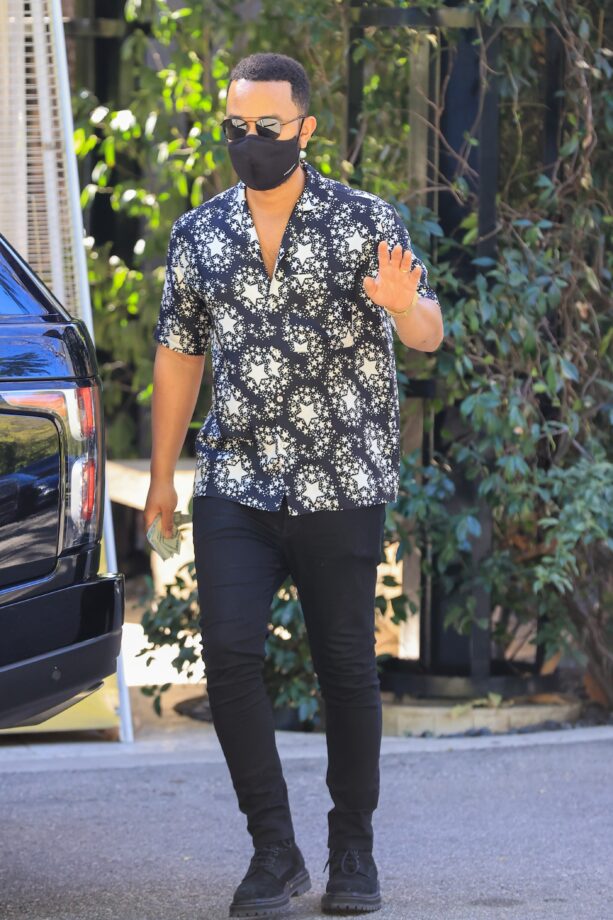 Legend’s not the only celebrity spotted wearing this shirt in particular. British Formula One World Champion Lewis Hamilton rocked this Gucci number (along with matching bottoms) while relaxing before the Russian Grand Prix late last year. Clearly, there’s something special about this shirt.

Bold patterned short-sleeve shirts like this Gucci number have proven to be the one trend more durable than The Spicy Cough over the last twelve months. It makes sense, too – after what’s been a rather gloomy period in world history, men are trying to spread a bit of optimism, fun and good cheer through their outfits. Other male celebrities that have gotten on board this summery patterned trend include Cristiano Ronaldo, Kevin Hart, LeBron James and Scott Disick, just to name a few.