We’re on the cusp of an electric vehicle revolution, but there are still a few sticking points with the general motoring public – most notably ‘range anxiety’.

Not only do electric vehicles tend to have less range than most of their petrol-powered counterparts, but unlike petrol stations, EV charging stations are far less common on Australian roads, particularly outside of metropolitan areas.

However, as more and more EVs are appearing on Australian roads, more and more charging stations are springing up to service them, even in regional and remote areas. Range anxiety has become far more of a psychological barrier than a practical one, yet many Australians remain hesitant about the viability of EVs outside of cities.

To combat this perception, leading German luxury car maker Audi recently embarked on a simple yet telling experiment: they handed the keys to their new e-tron Sportback to acclaimed photographer Woody Gooch (@woodygphoto) and had him complete an impressive 3,500km road trip down the East Coast – a journey that’s no doubt been completed by scores of holidaymakers over the last twelve months.

Ten years ago, this might have been a fool’s errand, but Woody’s journey was absolutely effortless. While the e-tron has a range of around 417km, there were enough charging opportunities during Woody’s drive that he was able to charge up every 233kms on average – barely over half the e-tron’s range. Something that may give many EV sceptics pause for thought.

That the East Coast now has so many charging points isn’t just valuable in terms of combatting range anxiety, but also in terms of convenience and performance.

Unlike an internal combustion engine-powered vehicle (ICE), where filling a tank with fuel is an entirely linear process, electric charging works differently. Charging from empty takes exponentially longer than just topping up, so being able to keep your EV mostly charged in between charging opportunities means you’re not waiting as long for the car to charge in total. It’s also better for the battery to keep it as full as possible – another plus. 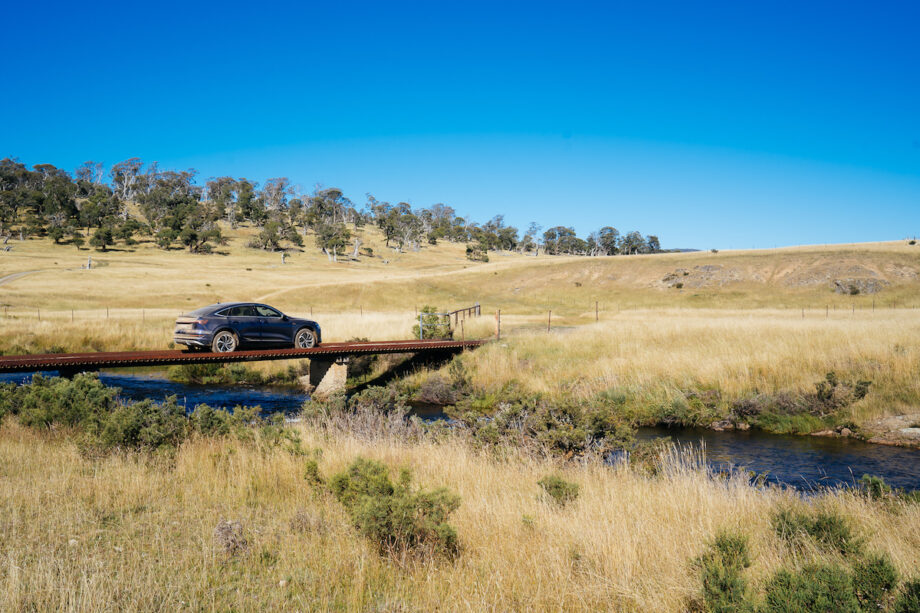 Still, revheads might say that this just avoids their core complaint: that EVs don’t have as much range as ICEs and just aren’t as practical for long-distance journeys. Are they right?

Let’s compare the e-tron with the SQ5, Audi’s most comparable ICE offering in terms of size and performance to their flagship EV. The SQ5, with its petrol-powered 3.0L turbo V6, has a range of about 635km, compared to the e-tron’s 417km. Admittedly, that’s quite a difference. And while you can fill up an SQ5 in less than five minutes, an e-tron takes just under two hours to charge to full via DC fast charging. Longer if you use regular charging or mains charging.

But things aren’t that simple. It costs ten times as much to fill up the SQ5 as it does to charge the e-tron, so you’re trading convenience for cost. Except that with so many charging opportunities, you’re unlikely to spend that long charging an e-tron anyway, so that convenience factor is diminished. There’s no getting past the difference in theoretical range but at the same time, you very rarely drive an ICE from full to empty anyway, so is it really a fair argument?

Audi shared some interesting stats about the road trip with us: “while the e-tron does take around 2 hours to charge on a 50kW charger, it takes approximately 30 minutes to charge to 80% of capacity or 45 minutes to charge to 100% using the ultra-rapid (350kW) charging stations available around the country.”

“Of the 15 chargers we visited on the journey, more than half were the ‘ultra-rapid’ stations. In reality, as we were arriving into these stations with normally around 20% battery, our charging time was usually 30mins or less to get back to 100%. We struggled to eat in this time before receiving a push-notification that the car was good to go!”

So really, we come back to the same argument: that ‘range anxiety’ is more a psychological barrier than a practical one. Yes, EVs will require Australians to subtly adjust their behaviour when it comes to motoring, but not as drastically as some would lead you to believe.

The reality is that it’s never been easier to own and operate an EV in this country, and as more Aussies adopt EVs over ICEs, things will get even easier. Battery technology is making leaps and bounds, too, so in a few year’s time, ‘range anxiety’ will be a thing of the past.

We’re just keen to do some road trips of our own. Hey Audi, we’d quite like a weekend away in Byron…