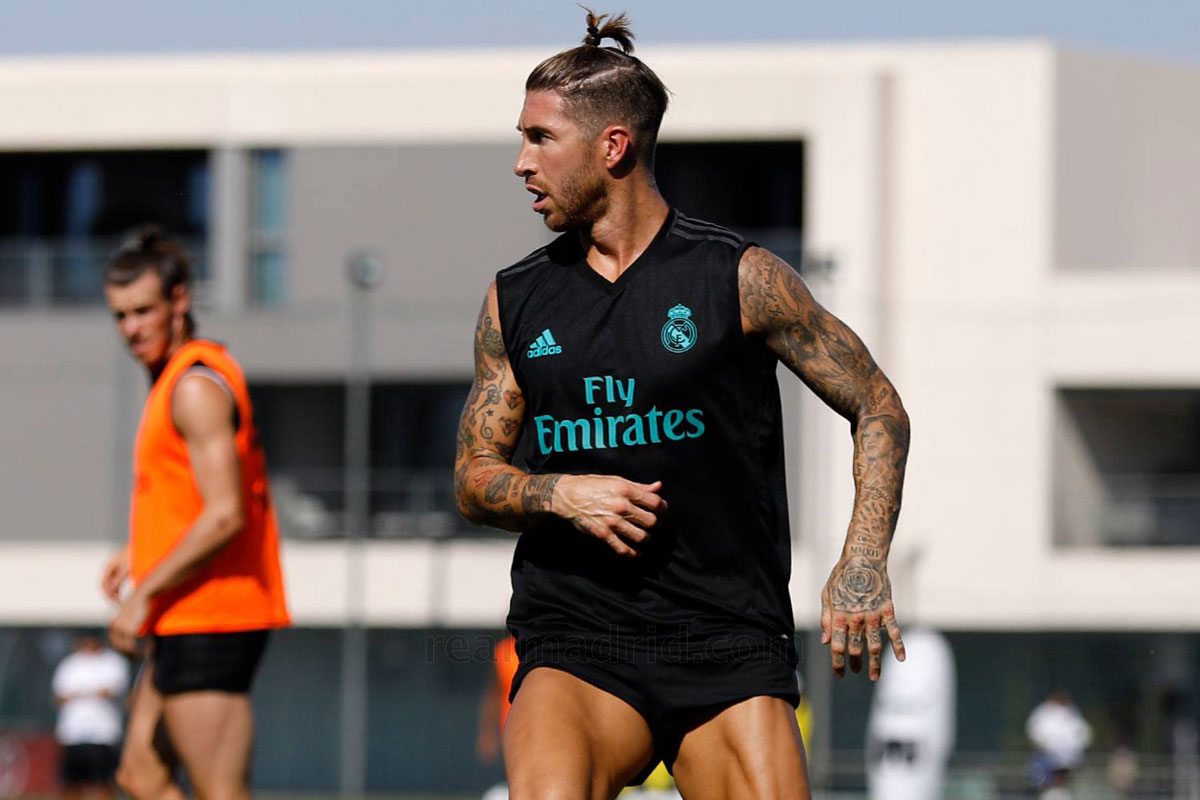 Think leg day is all about legs? Think again. Real Madrid captain Sergio Ramos has just shown why a healthy interplay between your core and crus is crucial, in the latest workout he has posted to Instagram.

The 34-year-old central defender, whose contract is up for renegotiation this summer, yesterday took to social media to showcase an innovative leg and core workout. Though he doesn’t throw plates around like a powerlifter, the exercises are instrumental in showing how to build functional strength in your pins and protect yourself from injury.

“Every day is a new day,” Ramos captioned the video.

In the clip Ramos works out to Kanye West’s 2007 hit Stronger – an apt song choice considering he is recovering from a knee injury.

Ramos can at first be seen doing leg lifts whilst lying supine on a bench, lifting one leg straight and the other cocked, before firing the cocked leg into the air at the summit of the pose.

He then shows off some one-legged squats, from a start point of sitting on the bench, and an endpoint of giving his trainer a double high five (which also serves to push him back into a sitting position).

RELATED: Australian Commando Shows You How To Build Insane Core Strength With Just Your Bodyweight

Next, Ramos shows off a glute, hamstring, quad, calf and hip flexor blasting exercise. This one involves lying supine with both legs bent at the knees above your head, rolling forwards off the bench, landing on one foot and standing up, projecting the other leg forward in a stair-climbing-esque pose, with a resistance band wrapped around his waist.

To finish, Ramos shows us a shoulder-stand type exercise, which – if the other exercises don’t – would appear to provide the finishing blow to your abdomen (in the best way possible).

Building ‘intelligent’ brawn is crucial for protecting against injury. This is particularly important for Ramos, who sustained a knee injury in January, which saw him leave a game against Athletic Bilbao limping.

The 34-year-old legend must avoid a crucial (or cruciate) injury to his knee at all costs if he wants to continue in the upper echelons of the sport for as long as possible, following in the footsteps of the likes of 36-year-old Juventus captain Giorgio Chiellini, who continues to defend against some of the best players in the world.

His long term fitness projection is also crucial for his upcoming contract negotiations. With his contract soon to expire, Ramos is rumoured to want to leave Real Madrid and join Manchester United at the end of this season, with Give Me Sport reporting, “The legendary centre-back’s contract expires in the summer and it doesn’t look as if the two parties will agree a new deal.”

“Ramos joined Los Blancos from Sevilla in 2005 and has since established himself as one of the greatest defenders of all time… The 34-year-old has won 22 major trophies at the club, including five La Liga titles and four Champions Leagues.”

“He’s still one of the best in the business and should he depart the Spanish capital in due course, Real Madrid are really going to miss him.”

Others doubt he will leave Madrid.

So long as he continues providing us with workout inspiration, we wish him luck wherever he goes. The big question now is: which club has the financial muscle to pick up his alleged €24 million gross salary demand?