One of the biggest pieces of Formula One news in 2020 was the announcement that Australia’s very own F1 phenom Daniel Ricciardo would be leaving Renault for McLaren in 2021, joining young gun Lando Norris at the British team. Ricciardo really struggled to find his footing at Renault (which has now rebranded to ‘Alpine’), so the move to McLaren has been exceptionally exciting for Australian F1 fans.

So far, the move seems to have paid off. Ricciardo seems re-energised and ready for the 2021 season – being at a more successful, more flush with cash team will do that, we suppose. Another big perk of the move for ‘The Honey Badger’ has been a much nicer “company car”, with Ricciardo quite pleased that he now gets to tool around in a new McLaren 765LT in his down-time.

The perks of the job don’t stop there, however. Joining McLaren not only means Ricciardo gets a nicer whip but a nicer watch, too. Ultra-exclusive Swiss watch brand Richard Mille is one of the McLaren F1 team’s biggest sponsors – so Ricciardo is now the proud owner of a RM 50-03 Tourbillon Split-Seconds Chronograph worth over 1.2 million USD, which he’s been proudly wearing in the flurry of promotional images McLaren’s released of the driver in the last few weeks. 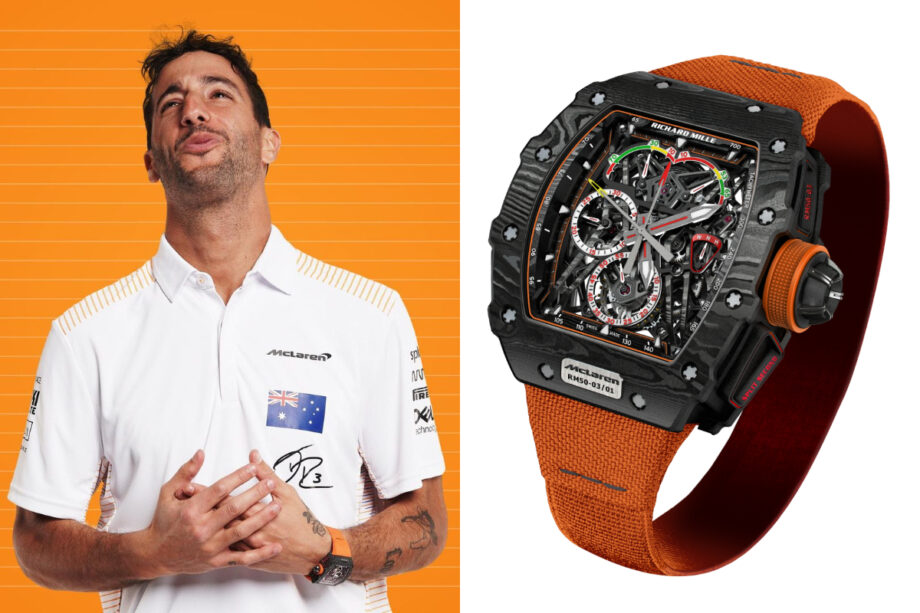 Produced in collaboration with McLaren, the eye-wateringly expensive watch is constructed from a revolutionary composite Richard Mille have dubbed ‘Graph TPT’. Based on graphene, a revolutionary nano-material which is six times lighter than steel yet 200 times stronger, the watch only weighs 38 grams, strap included. It’s one of the most technically impressive watches RM has ever made, and that’s saying something: the brand is well-known for its use of exotic materials and avant-garde mechanisms.

Perhaps it’s this lightness that explains why even performance-obsessed F1 drivers are willing to wear their Richard Milles in the cockpit or even while working on their cars, as Ricciardo’s new teammate Norris was spotted doing last year.

The 2021 Formula One World Championship will kick off with the Bahrain Grand Prix on the 26th to the 28th of March, with the Australian Grand Prix (which normally opens up the season) being pushed back tentatively to November due to the ongoing COVID-19 crisis. Travel restrictions have also seen the Chinese Grand Prix indefinitely postponed, with Imola returning to the F1 calendar in its slot, formula1.com reports.