Cathay Pacific also declared it would cull flights to Vancouver, San Francisco and Frankfurt in response to the local government’s new rule, which requires flight staff to quarantine for 14 days if they leave China.

The changes are reported to take effect from the 20th of February until at least the beginning of March.

During that time, Cathay Pacific’s five weekly services between Hong Kong and Sydney will continue running, but its Brisbane, Perth, Melbourne and Auckland flights will lie limp in the bin.

“In view of the Hong Kong SAR Government’s latest announcement, with effect from February 20, 2021 our Hong Kong-based pilots and cabin crew are required to undergo 14 days of hotel quarantine plus 7 days of medical surveillance when they return to Hong Kong after being on duty,” the airline confirmed in a statement, Executive Traveller reports.

“The new measure will have a significant impact on our ability to service our passenger and cargo markets,” noted Cathay Pacific chief operating officer Ronald Lam.

News.com.au reports “it is understood” the airline made the decision to introduce the 14-day quarantine rule after “the government’s announcement on February 5… following growing concern over the risk of importing mutant strains of COVID-19.”

Cathay Pacific are not the first airline to be impacted by this ‘mutant’ strand of COVID-19 (and the bureaucratic changes it has instigated). Emirates canned a week of flights (bar Perth) after Australian international flight caps were scissored in half in January.

Emirates ended up reinstating these flights after flight caps were increased in February.

According to news.com.au, “The number of people allowed to fly into NSW, Queensland and Western Australia were halved at the beginning of January in response to the new strain of the virus from the United Kingdom… But the weekly cap will now increase from 4127 to at least 6362 nationwide.”

What does this all mean for stranded Australians? For starters, it means when you jump on Cathay Pacific’s homepage, all flights from the 20th of February (and for that matter before it) to the end of March come up as “fully booked.” 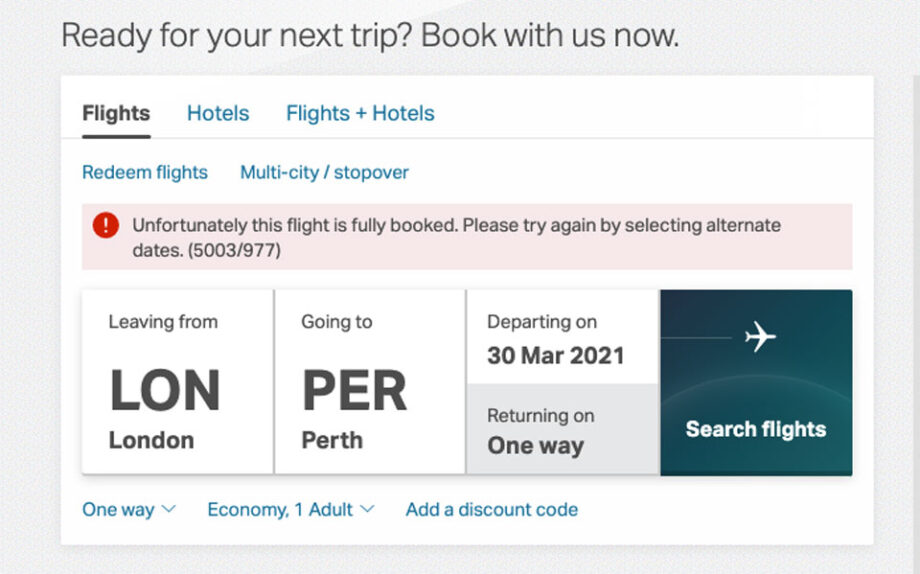 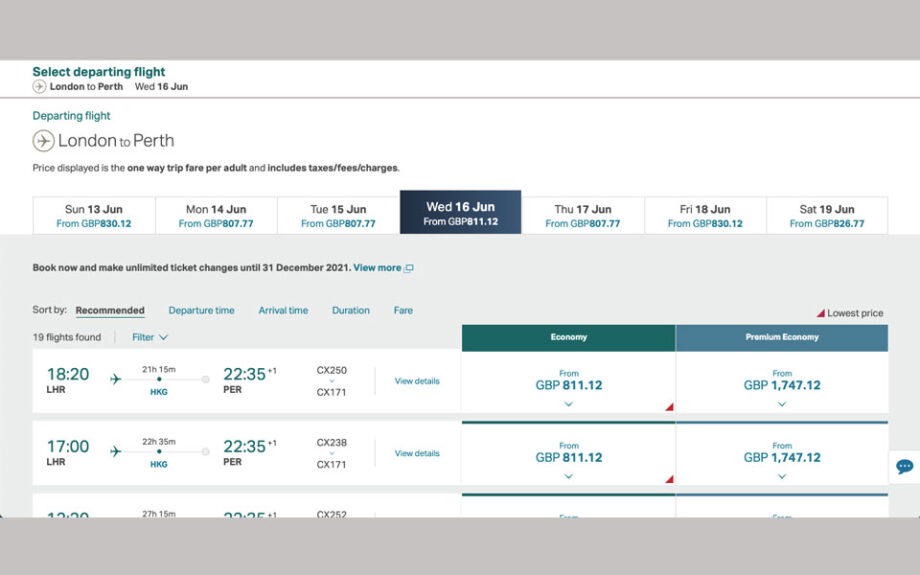 Evidence of how many Australians are still stranded overseas trying to get home? Looking at the availability of Emirates and Qatar Airways, the two other airlines which are operating flights to Australia right now, it appears so. 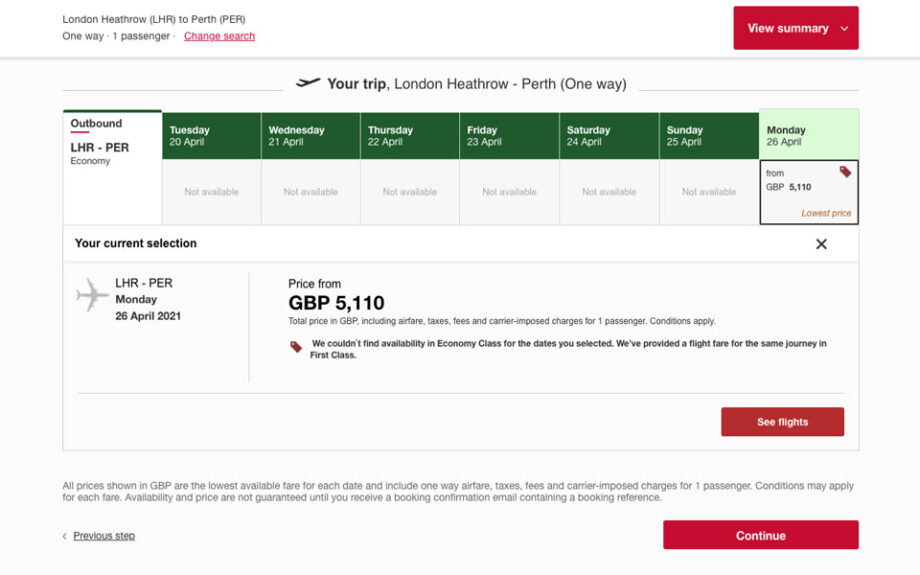 At the time of writing DMARGE was unable to find an Emirates London-Perth flight (with seats available) until the 26th of April, and even then the only fares on offer are AU$7,076 first-class ones. “We couldn`t find availability in Economy Class for the dates you selected. We’ve provided a flight fare for the same journey in First Class,” Emirates’ message reads. 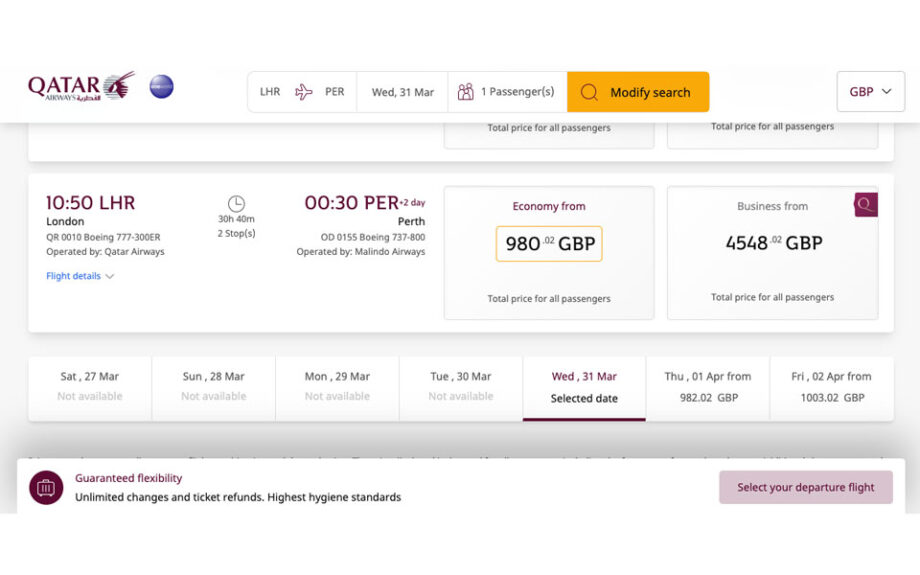 It’s a similar story with Qatar Airways, with flights appearing to be booked out until Wednesday the 31st of March.

As Sydney University Professor of Transport and Supply Chain Management Rico Merkert told DMARGE last year: “Yes, [continuing to operate flights has been] great for brand building and grabbing market share. It is harder to gain customers than to lose them in this business (once loyalty schemes and a decent product come into play).”

Speaking about Qatar Airways he said: “They… understand the importance of aviation to their economy (as a hub with some pretty new and expensive infrastructure sitting there and lots of competition from the UAE and other places).”

The upshot? If carriers like Qatar Airways and Emirates, which lack the domestic market to sustain them like, say, the likes of Qantas, and thus have great incentive to be operating long haul flights to Australia right now are having difficulties making them happen, the aviation industry must be in real strife.

Smart Traveller is currently providing the following advice to Australians trying to get home: “If you’re overseas and wish to come home, be prepared for delays and disruptions to your travel. There are fewer international flights available due to travel restrictions, disruptions to key transit hubs and limits on passenger arrivals into Australia. Travel regulations and restrictions are changing often and at short notice.”

“There are caps on the numbers of passengers coming into Australian airports from overseas. These are in place to ease pressure on state and territory quarantine facilities. These measures will remain in place until further notice.”

“Airlines manage the sale of tickets in line with the caps, not the government.”

“This could affect your flight into Australia. If you’re scheduled to fly home to Australia in the coming weeks, confirm your itinerary and travel plans with your airline or travel agent.”

Other tips if you’re trying to get home, from Smart Traveller, are:

For more information check out the Smart Traveller website.