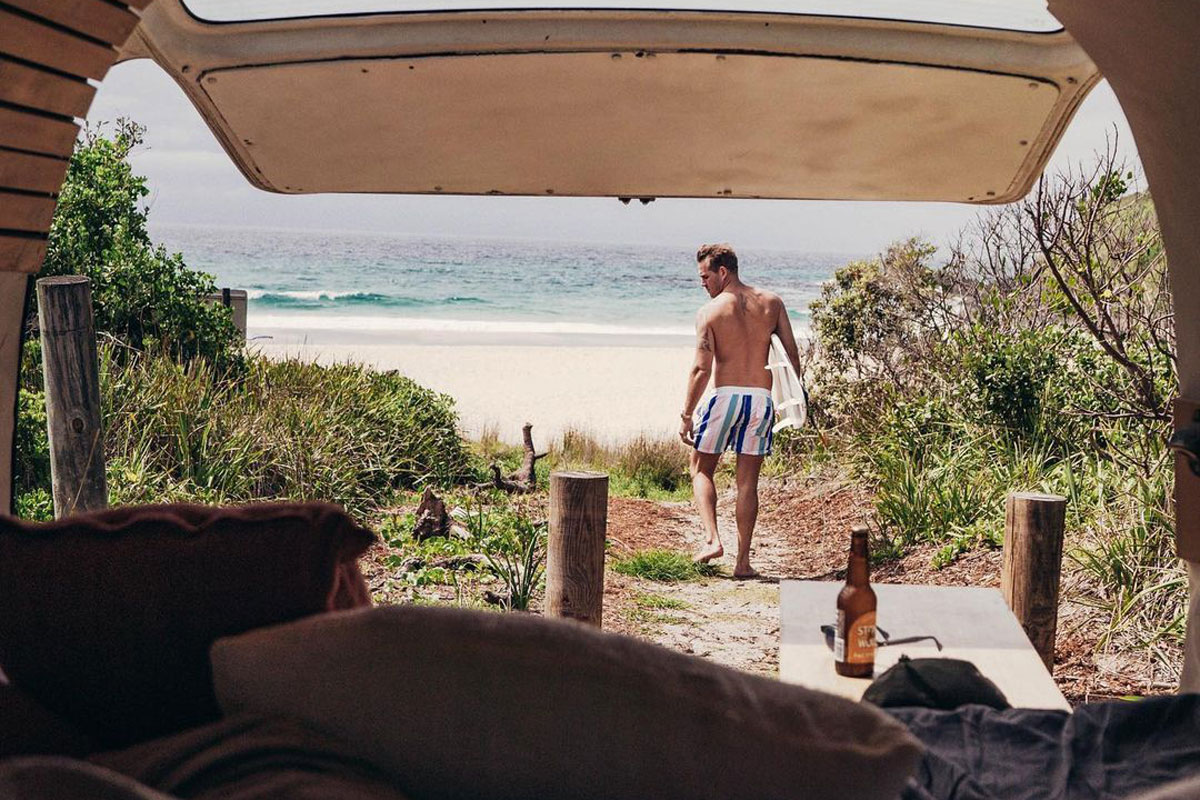 Wherever there is chaos there is always a pocket of opportunity. Making the most of it can lead to some of the best moments of your life.

Speaking of, one Australian man, Shaun Birley – travel ambassador for Qantas, Instagram influencer and international fashion distributor – recently put on a masterclass of improvisation we can all learn from.

Over the Christmas break, Shaun turned what could have been a costly and boring situation into an epic coastal jaunt.

Based in Brisbane, but often doing business in Sydney, Shaun tells DMARGE, “I had a meeting I couldn’t get out of” over the holidays. Consequently, Shaun was in Greater Sydney (not the Northern Beaches) the day the shutters came down, in response to the Northern Beaches’ Avalon cluster which emerged (and was subsequently controlled) in December.

“It was on that Friday afternoon… they just declared the Northern Beaches a hotspot and I couldn’t make it back to Brisbane in time, which meant it was going to be a compulsory self-funded $3,000 hotel isolation for flying interstate.”

The whole of Greater Sydney was put on the Queensland government’s ‘yeah nah’ list. But there was a loophole.

“The loophole,” Shaun explains, “was that if you spent two weeks outside of Greater Sydney then you could cross the border. So I jumped online, had a look at Airbnb’s and a whole bunch of other things and I decided to have a look at a camper [van].”

“All the major campers were sold out. The only thing that was available was a lime green and purple Juicy.”

Shaun had actually initially booked a much bigger Camper with another company with less ‘out there’ colour schemes, but it was double booked and he lost out. In the end, he tells us, he went with Juicy’s only vehicle, which wasn’t even really a van.

“It was a Toyota Hiace and it had a bed on the top which pops up.”

It wasn’t all beer and skittles from there though. Shaun tells us that keeping a good record of his receipts was crucial to his mission: “The guy at Juicy rentals was like, ‘mate as soon as you get out of Greater Sydney – top up on fuel, even if it’s like 5 or 6 bucks, and then keep that receipt.’”

“You need to keep that receipt, especially if you’re going to be travelling for two weeks. I got it, drove around Northern NSW for two weeks, and just hopped across the hinterland, then after it had been two weeks [on the dot] I got to the border control.”

Here’s where things got interesting.

“They saw the car, it sticks out like a sore thumb and they were just like, ‘Yeah mate you can pull over to this side while we question you,’ and I had to show them the rental agreement, then the first receipt of me filling up in just north of Newcastle.”

“I got to the border and the guy was like: ‘you need to show you haven’t gone back in that area.’ So I brought up my ANZ app and scrolled down through two weeks of things – Coffs Harbour, Yamba, etc. – as he went through and saw the transactions were coming towards Queensland he let me across.”

“I only crossed at 2 o’clock exactly two weeks [after leaving Greater Sydney]. He saw the petrol receipt of $12.55 and said, ‘Welcome back into Queensland.’”

“I did the full two weeks to the hour.”

That said – the nerves were real. Shaun tells us: “I started panicking, thinking: ‘Am I a day too early?’ and, ‘Holy sh*t, this is like going through customs, are they going to search my car?’”

“I freaked out a little bit when they pulled me to the side asking for all the documents. They probably thought I was an English backpacker and obviously profiled the car straight away.”

Naturally, making it across felt good: “When I got across the border I was ecstatic.”

For all the latest information regarding crossing the Queensland border (the list of hotspots is being constantly updated), click here.

Though Shaun was relatively lonely in noticing this loophole, he is far from on his own when it comes to getting a taste for living in a motor vehicle. In fact, there is a burgeoning trend of Australians ditching their houses for vehicles.

DMARGE last year reached out to Van Go Fit Outs, a Sydney-based company that specialises in converting vans into kilometre-crunching bedrooms, to find out just how much of an uptake they have experienced during the era of COVID-19.

Mark Atkins, founder and director of Van Go Fit Outs, told us, “Van Go Fit Outs has seen a massive increase in enquiries, which are obviously due to the travel restrictions and lockdown caused by Covid.”

“There was a week where we had 1000+ enquiries all asking for quotes, which is insane numbers when we know we can only realistically work on so many vans at one time.”

“We have some pretty crazy enquiries with people wanting to remove the passenger seat of hatchbacks to allow for a bed and pop tops onto small 4x4s like [Toyota] Rav 4s and Jeep Defenders.”

Mark also told us, “Due to conversions being custom, prices vary quite extensively. For a full conversion with off the grid living you are looking at starting prices of $30k, but more information about our packages can be found on our website.”

$30,000 for a self-sustained house you can comfortably live in doesn’t sound bad when you consider how insane Sydney’s house prices are becoming.

So, will this self-contained mode of travel go the distance or is it simply a fad that we have to endure until international travel restarts?

Mark believes it has plenty of legs.

“I don’t see the van trend going away for a long time, people have been travelling around the world for years in vans.”

“I think people have realised there is lots to see and do in this amazing back yard of ours and with more people looking for the never-ending adventures the Van Go Van is the way to see and do all the activities in comfort and style.”

On that note, Shaun agrees, telling DMARGE he is “100% inspired to do more improvised trips” and to explore more of our backyard.