The NBA has always attracted its fair share of interesting characters.

Take Dennis Rodman, whose head looks like a pincushion and who’s bizarrely mates with North Korean dictator Kim Jong-Un; Darryl Dawkins, who claimed he was actually an alien from “the planet Lovetron”; or Metta World Peace, who not only had a habit of swigging luxurious French cognac during halftime at games but also used to call himself Metta World Peace.

The Brooklyn Nets’ Kyrie Irving might not be quite as weird as some other NBA players but he’s certainly an individual. Where other basketball players dive head-first into the ‘baller’ lifestyle, Irving is a bit of a hippie. A sax-playing, plant-based diet following, spiritual sort of guy, he’s also a passionate activist, drawing upon his unique heritage as a half-indigenous, half-African-American. Many basketball fans don’t take his peace quest vibes very seriously – but his skill on the court is indisputable.

As are his style bona fides, apparently. The 28-year-old was spotted before the Nets’ game against the Philadelphia 76ers on the weekend wearing a rather inspired outfit: an Acne Studios jacket, Travis Scott x Nike Air Jordan 1s and some incredibly ‘stacked’ raw denim jeans from cult streetwear brand Vale Forever. That’s to say nothing of his walking stick… 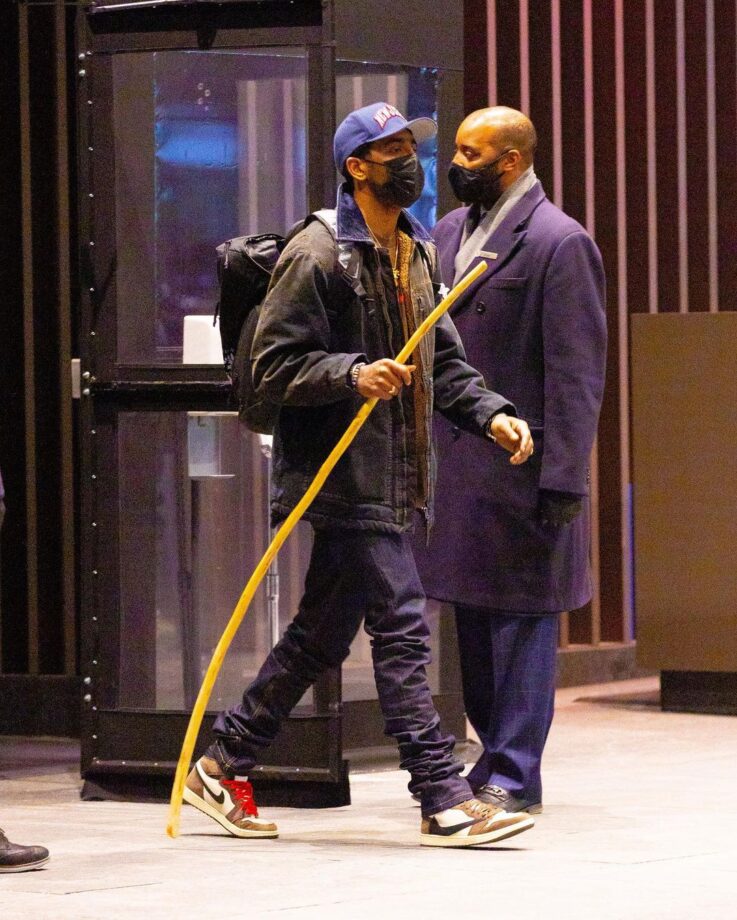 Brooklyn has long been a mecca for streetwear style, so we guess Kyrie’s just trying to fit in. He looks like a real hipster – especially with that Lord of the Rings-esque walking stick – but those jeans are just amazing. Clearly, Irving’s casting some potent style spells.

‘Stacks’ refers to the concertina-like folds that raw denim jeans often form thanks to their thick, rigid construction. Denim connoisseurs obsess about cultivating perfect stacks, and it’s one of the main reasons people choose to invest more in raw denim – but it’s a bit of a dark art. You need really skinny jeans, just the right amount of length, and denim that’s robust enough to form stacks but worn-in or soft enough to be comfortable (and not turn your legs into accordions). They’re a great fashion choice for thin or tall men, as the stacks break up your leg line and make you look less giraffe-like.

Sadly, that denim magic wasn’t enough to help the Nets beat the Sixers, with Kyrie’s team going down 108-124. The Nets’ next game is against the Detroit Pistons at Little Caesars Arena in the Motor City on Tuesday 7pm EST (Wednesday 11am AEDT).