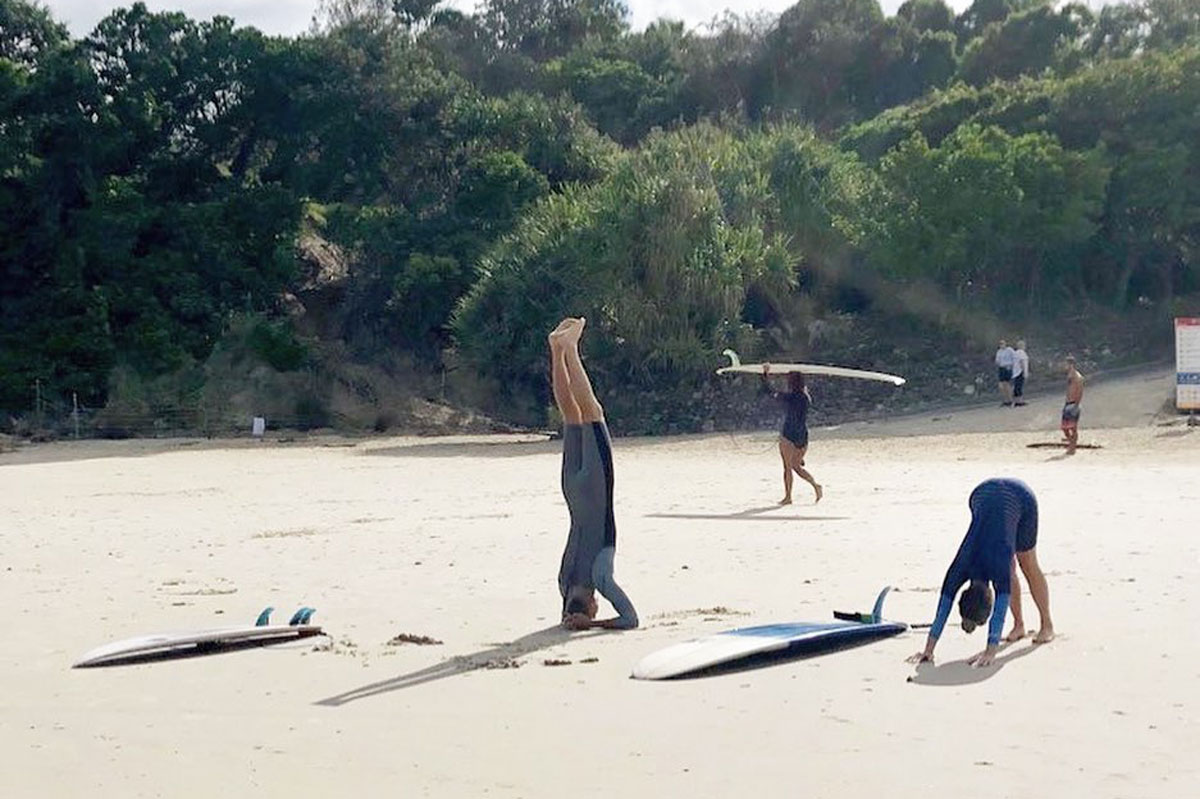 Authenticity and headstands, it should be added.

Speaking of: a photo uploaded on Friday to Instagram may be the most Byron Bay (in 2021) photo ever. Posted by @lordsofbyronbay, it depicts a man next to a thruster surfboard doing a headstand, and a woman next to a single fin longboard doing a downward dog.

There is another woman carrying a nose rider mal on her head in the background. A man called @twlyf is tagged.

Welcome to The Pass.

Comments next to the post included: “Surfing the source man… swear to god,” “Upside down brah,” and “Hipsters are funny!”

“Paddles out.. next minute ‘why am I at Clarke’s’”

Though most were dismissive of the man’s attempts to align his chakras (“Warming up for what? Most likely 2 ft and crowded AF”), one commenter came to his defence, citing a practical need for such antics: “[If you] wanna surf the pass on a pro model thruster like that bloke you need be warmed right up.”

This is not the first time Byron Bay has been mocked. @lordsofbyronbay have made a habit of posting posturing incidents (see above) on their page, and no one can forget the time Vanity Fair went to town on The Hinterland’s micro-influencer industry.

“In this young, mostly white, ahistorical, neoliberal utopia of the imagination, anyone can go anywhere,” Vanity Fair sardonically summed things up in 2019.

Since then, The Byron Bay Influencer Effect has only become more pronounced, as has the reaction to it (both from locals and click hungry media). Even the Betoota Advocate is in on the joke.

The upshot? Though being ‘hinterland adjacent’ used to be something to brag about (“Yeah, I did 6 months in Byron”), it’s almost becoming something to be ashamed of. Keyword being almost, with a DMARGE correspondent recently heading up the coast to investigate the charms of the lifestyle (and another on the way to live there soon).

As for the future: no longer is Byron Bay a sleepy oasis of hippies – it’s now full of celebrities, influencers, Sprinter Vans, Land Rover Defenders, Melburnians with “ironed jeans,” British backpackers and Sydneysiders. With the work from home and van life revolutions in full swing, this doesn’t look like changing any time soon.

Not content with elbowing in on the local scene, many newcomers are intent on co-opting it too, playing at being a hippie, learning to surf, milking their own almonds, etc.

Though some locals are happy to share the ~chill~, others are over it.

RELATED: Most Bondi Photo Ever Sums Up Australian Cafe Culture In 2021

As one Byron Bay resident wrote last month in the comments of surf website BeachGrit: “It’s… a sad thing to watch a town we loved be subsumed into parody.”

“I just came back from riding my fresh 9’9″ at Wategos, a pintailed & rockered wildcat of a thing that Ed Sinnot made me for Christmas, purpose shaped for navigating the marauding peaks out off the Cape, one of the very few spots you can avoid the c*ntery that seems to have washed over Byron in the last 6 months.”

“You can’t avoid the c*ntery in the carpark though, I was no shit squashed into my car park by 3 fuckers in Black SUV’s, I had one at both nose and tail and one on my wing waiting for me to move so he could gobble up my park, I felt both outraged and intimidated, black SUV’s are no doubt designed to intimate, the vehicle of choice for the master race.”

“The carpark felt like a parable for the Byron housing market.”

“There was a time, not so long ago, that it was considered an uncouth act to drive a luxury vehicle in the Byron Shore. I used to joke that the secret to success around here was to have lots of money but pretend that you didn’t. Dave from Pighouse Flicks drove a convertible Rolls Royce with a 9’5″ in the passenger seat, but I’m fairly sure that he was being ironic. Now the Black SUV is the new surf van, Byron is long past trying to hide wealth, now it’s a matter of letting it all hang out.”

“There’s still a lot of legends that live around here, salt of the earth folk that have been doing it real for generations, but the fresh waves of nouveau rich are gobbling Byron up faster than it can rebirth itself, I’m sensing it’s for the dogs, like many others who have been here for a generation, I’m deftly crafting my exit strategy.”

The author of that article summed Byron in 2021 up well, writing: “Byron is Abu Dhabi with cafes and warm-water peelers instead of air-conditioned malls. Euro-babes and Brazilian studs do the coolie labour instead of South Asians.”

“It’s a town more status obsessed and class conscious than Victorian England, more wealth inequality exists than at any time since the Vanderbilts and Rockefellers strode the boardwalks of Manhattan.”

“Surfing is just the latest accoutrement. A kind of necessary flag to wave that shows peers that you are doing life right.”