Why is it romantic to flee to the Italian hills, yet depressing to move to Bowral? Is it because the far-flung is inherently more attractive? Is it because our heads are full of stereotypes? Is Italy’s countryside really more seductive?

Although the 2020 work from home revolution has led droves of Sydneysiders and Melburnites to escape the rat race, the bulk seem to be going to coastal enclaves like Byron Bay, Jervis Bay, Port Macquarie and Noosa – or semi-tropical inland getaways like Bellingen.

Country towns like Dubbo, however, remain relatively passed over. On that note: Italy may have a solution Australian state governments and local councils could learn from. Selling houses in areas with dwindling demand for pennies on the dollar.

As CNN Travel reported yesterday, “The town of Biccari is the latest in Italy to offer bargain houses for sale in an effort to reverse depopulation trends caused by decades of locals leaving in search of work.”

“If you’ve been tempted to pick up one of the dilapidated houses offered for sale in Italy for little more than $1 but had second thoughts about the hassle of renovating it, one town has an offer that might just tempt you,” CNN Travel wrote.

“Biccari, deep in the southeastern region of Puglia, is also selling off dilapidated homes priced at €1, but unlike other destinations, it also has bargain deals on ready-to-occupy places. Prices of empty turnkey dwellings start as low as €7,500 ($9,000). Most are in the range of €10,000-€13,000.”

The sale is part of a grand plan to stop Biccari, whose population peaked at 5,000 in the 1950s, from becoming a ghost town.

“We’re barely 2,000 residents,” Mayor Gianfilippo Mignogna told CNN Travel. “Depopulation is an open wound, a steady phenomenon. Locals keep leaving and while most used to come back during the summer to visit, now they no longer do so. Many habitable houses are empty and are falling into oblivion.”

“One day I was wandering through the old center, and it struck me how so many cute little homes in a perfect shape had been shut for years, tucked away in silent alleys, with signs ‘for rent or sale’ that nobody sees,” Mignogna said.

“I thought the best way was to involve those no-longer interested owners to sell them right off.”

There are about a dozen €1 and 20 “upper-scale” homes available but there could be more than 100 empty dwellings in Biccari are in need of new occupants, according to CNN Travel.

“Photos and maps of the properties will soon be put online on the town hall website but interested people are invited to contact Mignogna ([email protected]).”

Those who go for a dilapidated €1 dwelling are required to pay €3,000 – to be returned once the works are completed, possibly within three years. However, if there is “a good reason for” any potential delay then “the completion deadline will be extended,” CNN Travel reports.

Since the article by CNN Travel went live, local media outlets have claimed Biccari has been flooded with interest. The verified Instagram account of local news website la Repubblicca yesterday posted an image captioned, “Houses for sale at one euro in the village on the Dauni Mountains: Biccari receives 7 thousand requests in two days. The wave of emails from all over the world after the publication of the news on the CNN website: ‘Cute village in the South of Italy sells houses at affordable prices’. The mayor: ‘We are incredulous.’”

Another account, the National Association of Virtuous Municipalities, posted an image with the caption: “These days we are receiving a lot of emails from the United States and from all over Europe. So far, over 7,000 people have written to us because they are interested in evaluating the purchase of houses in Biccari from 1 to 15 thousand euros.”

“In the narrow world certain houses (and certain things) have not had more luck (for reasons that we are not here to say). But if we try to enlarge this narrow world a little, maybe the story changes. Maybe somewhere there are other possibilities that we can go and build ourselves. For this we try!”

Biccari is located in the province of Foggia, in the Apulia region of southeast Italy. Its top attractions, according to Tripadvisor, are its lakes, the Torre Bizantina, the town’s church and the Chiesa di San Quirico lookout. Biccari also has a classic (though small) selection of restaurants and cafes.

At the time of writing, there is only one Airbnb available in Bicarri (when searching for a place to stay this coming weekend). It costs AU $202 for two nights. This gets you an entire house that can accommodate 8 guests, which has 1 bedroom, 4 beds and 2 baths. As of yet there are no reviews. 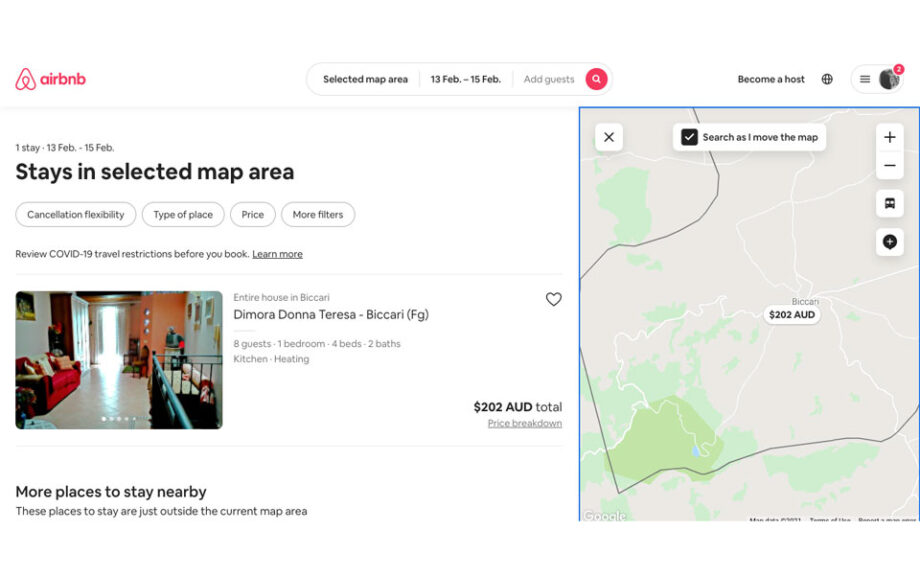 Will Bicarri be saved? Only time (and, perhaps, the digital nomad trend sweeping the world) will tell.