The late 70s was a landmark era in Swiss watchmaking. It saw the rise of the luxury sport watch, with many of models introduced during the decade going on to be icons of the watch world: the Audemars Piguet Royal Oak, the IWC Schaffhausen Ingenieur ‘Jumbo’, the Patek Philippe Nautilus and the Vacheron Constantin Overseas just to name a few.

Another design that hails from this period is the Piaget Polo – perhaps the most distinct of all the 70s luxury sport watches. Unlike many of its contemporaries, it was not designed by Gérald Genta – the famous Swiss watch designer who also penned the OMEGA Constellation and Cartier’s Pasha de Cartier. Instead, it was designed by Yves G. Piaget, a fourth-generation member of the Piaget family and the brand’s current chairman.

But more importantly, where the rest of the competition feature designs that emphasise their utilitarianism; their manliness – the Polo is more subtle; more gentlemanly. Piaget has always been a brand of restraint and epicureanism, and the Polo speaks to that character of the brand. It’s bold but has a softness; an elegance to it that its contemporaries don’t. In a world where the Nautilus and Royal Oak are often a shorthand for nouveau riche artlessness, the Polo stands out as a more refined, considered option.

Refinement is certainly the operative term here. 2021 has seen Piaget release the Polo Skeleton, the most exciting rendition of the sports watch yet and one that pulls off something that many skeletonised luxury watches fail to achieve – actually making the watch nicer to wear. 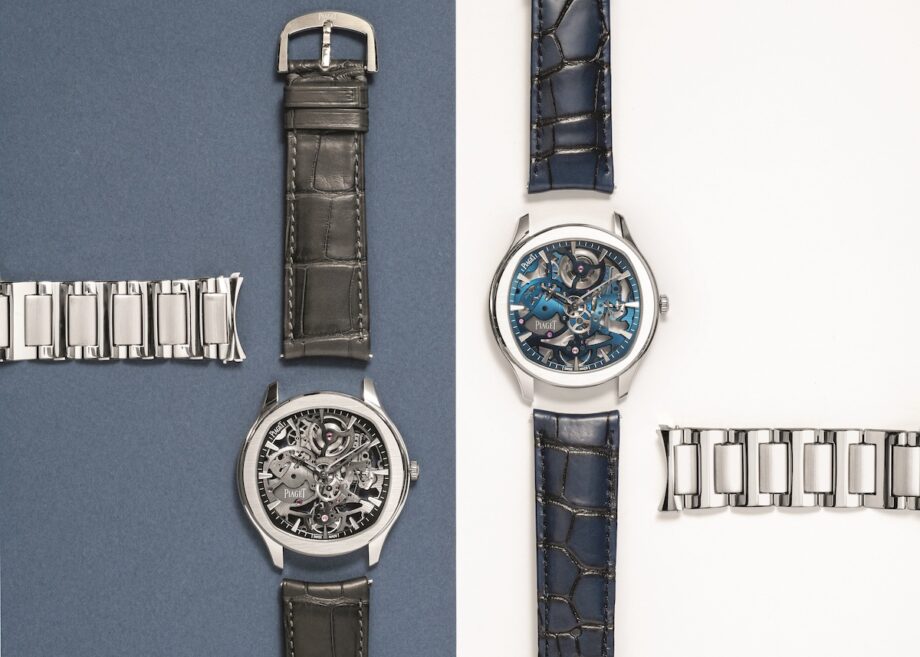 The Polo Skeleton in slate grey and Piaget Blue PVD.

Piaget didn’t just gut an existing Polo and shoehorn a new structure in. The seamless design of the Polo Skeleton belies the fact that it’s almost a completely different watch compared to the OG: in order to facilitate the skeletonised construction and movement, Piaget had to radically redesign the sporty wristwatch.

Measuring up at 42mm, the Polo Skeleton has all the classic Polo features – that classic curved case with a round bezel and that distinct, cushion-shaped dial opening – but it’s 30% thinner than existing versions at just 6.5mm, powered by an evolution of Piaget’s 1200S1 self-winding manufacture movement (which was first utilised in Piaget’s Altiplano line of ultra-thing watches), itself a wafer-like 2.4mm.

The point of skeletonising a watch isn’t just to make it look cool, but it’s also to reduce weight in order to make the watch more comfortable. The Polo Skeleton comes up trumps in the weight and looks stakes, but also wins in the thickness race – a technically impressive feat that also adds to this luxurious watch’s comfort bona fides.

Despite its intricate appearance, the Polo Skeleton remains just as robust, reliable and practical as its Polo siblings, featuring a 44-hour power reserve and water resistance down to three atmospheres. Piaget has also redesigned both its iconic integrated steel bracelet and the leather straps that come with the Polo Skeleton in order to provide a quick-change function – a quality-of-life improvement that’s sure to appeal to even the most discerning watch fans.

The new Piaget Polo Skeleton is available in two highly individual designs: the first with a movement in Piaget Blue PVD, the second in a slate grey finish (with matching leather straps alongside the standard steel bracelet for each variant, naturally). Both colours look stunning and really complement the innate beauty of the skeletonised movement itself, the watch’s sapphire crystal caseback letting you admire it from front to back.

It retails for 45,500 AUD but isn’t likely to last long, so inquire at your local Piaget boutique post-haste.