If you don’t occasionally fantasise about swanning off to Bali, you probably aren’t working hard enough. But what many don’t realise is that beyond the veil it’s not all Bintangs and back massages either.

Living in Bali during a pandemic is quite the surreal experience, various Australian expatriates have told DMARGE.

This comes after last week discussion exploded online around westerners living like royalty in Bali (on a shoestring budget, no less), as well as concerns around the logic of deporting digital nomads bragging about this very lifestyle (at a time when Indonesia is desperate for tourists).

she is not the reason for my struggles, she did not cause the homophobia here, but her audacity to overstay her visa, work from here and not pay the obligatory income taxes for foreigners who stayed more than 6 months, is grating my nerves.

To get the on-ground take on what it’s like to ‘live the dream’ right now, as well as to answer such burning questions as: “Is there Crossfit in Bali?” and: “How does it really feel to do timesheets by the pool,” DMARGE spoke to Peter Hibberd, Executive Creative Director at Ogilvy who has become quite the WFH (work from hotel) connoisseur.

Hibberd has been “living and WFH (Working From Hotel) in Bali,” he told DMARGE, “since March 2020 as soon as the first Covid-19 lockdown was announced.”

“However, I’m not a tourist. I’m actually a legal resident in Indonesia with full KITAS (working permit) living in Jakarta, so for me it’s like running the company in Sydney from Byron Bay, and instead of my apartment, my kickass boutique hotel has been the base of operations. There is currently a huge uproar about ‘digital nomads’ in Bali and because I pay tax as a resident I thankfully sidestep that social stigma even though, to any passer by, local or otherwise, I’m another Bule’ with a laptop.”

“I love living here and WFH but I’m a legal Indonesian resident. There are very strict laws when it comes to working remotely in Indonesia and they enforce them.”

The most surreal thing about being in Bali during the Covid-19 pandemic, Hibberd told DMARGE, is “stark empty streets.”

“Just like any other major metropolitan area, the surreal reality is… dead silence. The streets of Seminyak are like a ghost town still to this day most nights. There’s maybe 10% of places actually open. A usual trip from Canggu to Seminyak (6.5km) is usually an hour or more, now, 15 mins.”

Hibberd also told us: “there are still some wonderfully surreal things happening even though the island is under the influence of Covid. It’s the ‘Island of the Gods’, only one of the 17,000 odd Indonesian Islands of the archipelago. For example, I sat and watched an international concert pianist on a white grand piano on the edge of the cliffs at Uluwatu as the sun set.” 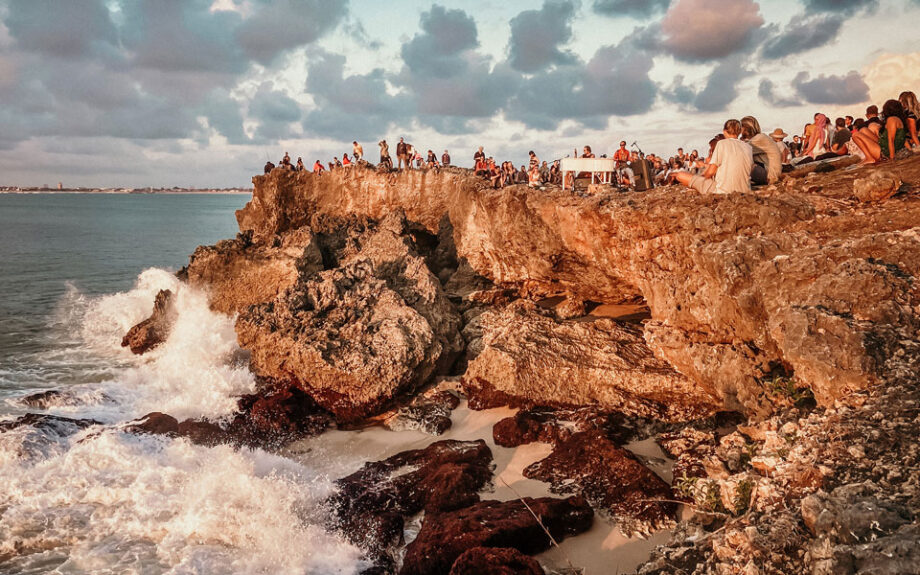 Hibberd also told us about a local construction worker who went viral “for driving his scooter with up to six dogs as passengers.” 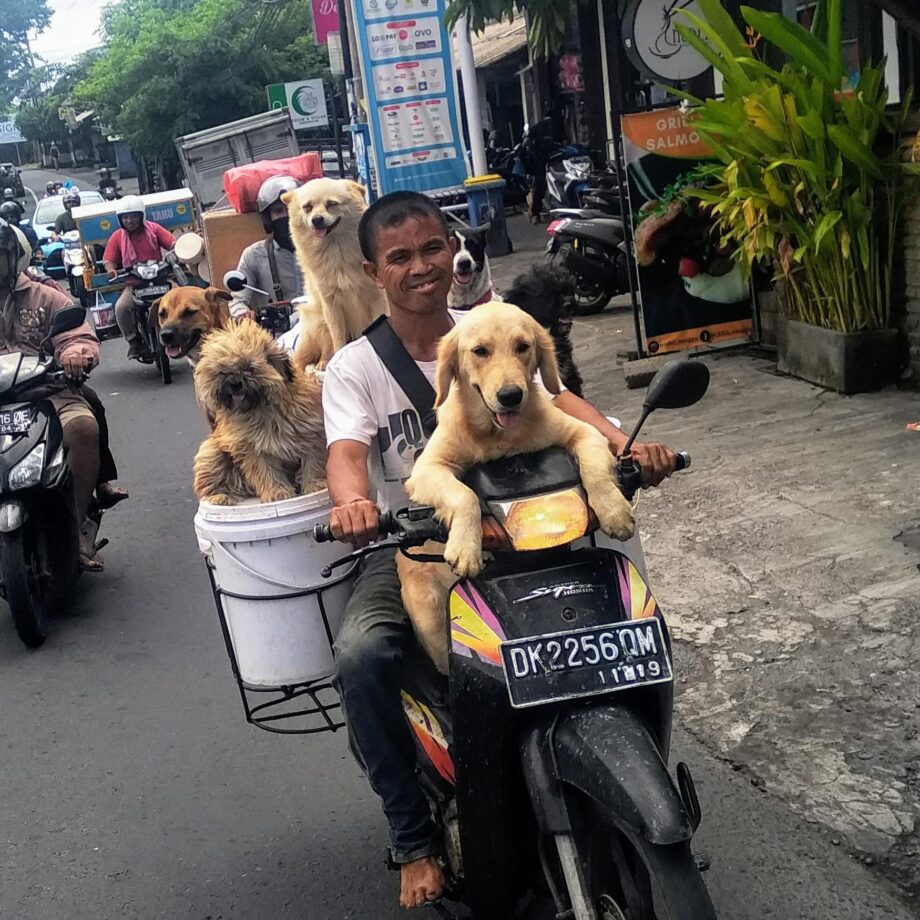 Alongside this, there has been a shift in demographics, with “a mass exodus of foreigners back to their local countries due to the fears of the pandemic.” This has led to the “oversupply of Australians on footy trips and French escaping the winter [being] fully replaced by Russians, who we can only assume get a free ticket to Bali with every second bottle of vodka purchase at the local Moscow bottle-O.”

The best bit about being in Bali right now, in Hibberd’s opinion, is the freedom. “Due to strictly enforced Covid policies, as per any usual safety enforcement, it actually allows freedom. It’s quiet. I’ve been coming to Bali every couple of weekends for four years and it’s so empty it’s like a country town.”

Hibberd also told us that, much as he’d love to pop our vision of the ‘jealousy industrial complex’, living in Bali right now, for his money, is pretty damn enviable: “Prepare yourself. Take a deep breath and let the envy wash over you like a peeling 5 footer at Old Man’s, there’s nothing you can do about it. You’ve been warned 3, 2,1.”

“The Island is its own quarantine zone. There is minimal domestic flying inside Indonesia, so the cases have been relatively low and stable. Therefore, wear a mask and the cafes are open to sit, chat and work, the fresh rich java coffee flows freely and the beaches are a breath of fresh air to cleanse the lungs as the sun sets.”

“Even the surf breaks are pretty empty comparatively. I hear on a good day you can be one of five people at Uluwatu on a peeling 6ft break, one of which is Kelly Slater [when he was there, anyway]. On top of all that, there are insane deals at hotels large and small, villas are desperate for occupancy and if you thought drinking was cheap in Bali before, now it’s almost a steal.”

“Beyond the regular coastal areas, Ubud, the vegan loving, hippy yoga retreat centre of Eat Pray Love fame, is really empty. So forget booking three months in advance to eat fine dining at Locavore, a call that day and you’ll generally get you a seat. Even if I ran out of things to do on the main island of Bali, (which I haven’t), I’ve jumped on a boat to Gili to finally take my deep diving license to chill out with turtles, manta and sharks at the bottom of the ocean floor then skip over to Nusa Penida and Lembongan for some of the quintessential IG location shots.”

“All three of the smaller islands are empty of tourists so wherever we went, we had the place to ourselves. I think a long ship diving tour of Komodo is on the cards next.”

Hibberd also told us that what he has found challenging is keeping himself fit – something you might assume would be a piece of piss without the hassle of a commute. Au contraire: “Working out at Wunderlust pushing PBs with Dave Driskell every day [has been the most challenging aspect to living in Bali],” Hibberd said.

RELATED: I Went To Bali’s Most Instagram-Famous Oasis & It Was A Complete Disaster

“Most people say with an air of bluster, ‘Oh, if I had six months off, I could just go to the gym and get ripped like Chris Hemsworth, but you know, I got a job and….  *insert whatever other excuse they have for not actually doing the work*’. Well, it’s COVID, you’re generally locked down, now’s the freaking time! I’m definitely not a big guy (a 40-year-old very skinny ectomorph) but since lockdown, I’ve gained 14kgs and gone down to 16% body fat. It’s a work in progress, but if not now, when?”

“In all seriousness, just like any other place the world over, the challenging part of being in Bali is not seeing my family and friends in Australia. Thankfully my kids are with me here but there are many that have been separated for months. I empathise with many across the world separated from the ones we love. I’m not sure you could find a better place to sit the pandemic out, but family and friends are what really matters.”

Hibberd also told us that even from a visitor’s perspective, “you can really tell the locals are hurting,” with 80% of the entire island’s revenue [usually] derived from tourism. “That’s crippling. The best we can do is support local businesses by eating and drinking and be generous to those we interact with.”

Hibberd plans to stay as long as possible. He told DMARGE: “I don’t expect any real change in policy at the office until there’s certainty of safety for all. So I’m currently negotiating buying property here. Due to the drastic drop in tourists, the prices on land are very good but buying property in Bali is nothing like Australia with completely different laws and regulations for expats.”

Not every Australian expat has had the same experience, however. An anonymous source told DMARGE his plans were scuppered by The Bat Kiss: “My partner and I came here for a job in the tourism industry, which was great timing (not). We arrived in late January to start work and by the middle of March Bali’s tourism began to suffer due to COVID. This meant that we stopped work because of the rapid decline in tourism.”

“It has been very challenging having no work. But the most difficult thing has been to witness the devastation this pandemic has caused Bali and its local people. Very minimal tourism has meant that local businesses have been un-able to support themselves during these very tough times resulting in people being forced to travel back to their villages and/or islands to find work again.”

“We have been here just over 1 year and are planning to come back to Aus next month.”

“Regarding the job luckily we had savings and both me and my girlfriend’s parents helped support us any way they could while we’ve been here. We were unable to find another job as working here requires a KITAS visa, which requires the company you work for to sign you on and do all the logistics with Indonesian Immigration.”

“There’s definitely a lot of expats that have experienced the same, whether they be holidaymakers who got stuck here or big business owners that have also suffered from the lack of tourism. Everybody has definitely been affected here one way or another.” 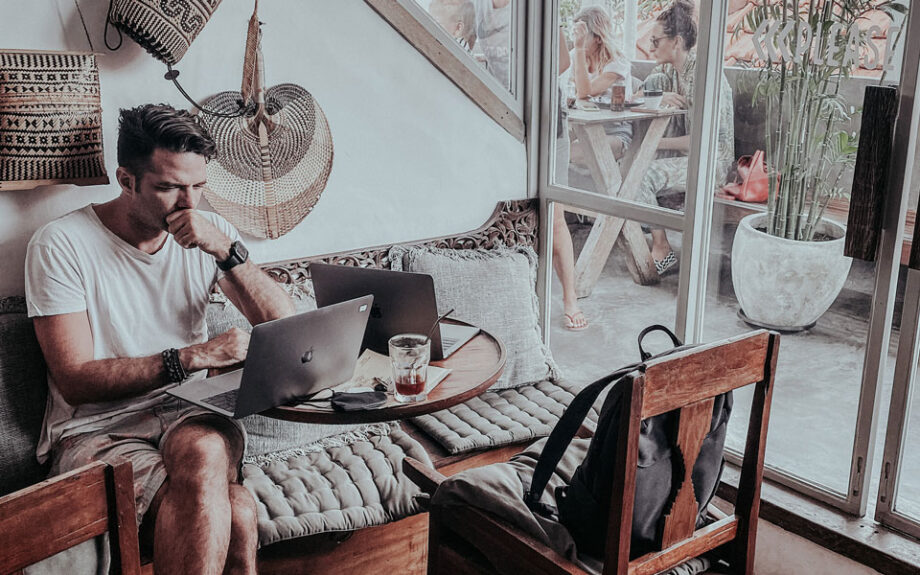 As Hibberd sums things up: “The old gag would have been; ‘There are less Australians in Australia.’ Not anymore.”

“I actually haven’t lived in Australia for 7 years so I’m not 100% up to date with the situation on Flinders St, but Bali is still, well, Bali. If you haven’t visited yet, once this pandemic subsides, you really should. The people are lovely and welcoming in general if you respect their culture. They call it the Island of the Gods as it wears its religion on its sleeve and it’s beautiful to watch and admire.”

“There are plenty of tourist traps to fall into that are just disrespectful like any foreign country, but it has a mystical playfulness that allows you to enjoy the tropical weather in very affordable luxury. Get past the classic Kuta bar cliches and you can discover a rich island worth exploring.”

As for your chances of joining the likes of Hibberd? Perhaps the signs are more positive than you think: “The IT department has been prompting CEO’s the world over to be more flexible with office space for decades, but it took a pandemic to make them change,” Hibberd said. “I assume every CFO (including mine) is currently doing the math on square footage at the office and costs associated with WFH on a regular basis even when this pandemic subsides.”

“Our office implemented WFH policy in one day and fully operational the next. I’m lucky/grateful/worked bloody hard with the team to keep all 300 staff employed and not had to fire anyone at the office.”

According to Bali.com, “International tourism has been put on a halt since March 2020 by stopping the visa free regulations, that allowed visitors from 160 countries to come to Indonesia without a visa. This left a little door open for the Bali lovers to come, because until 31st December it was still possible to apply for a Business or Social Visa with the help of an agent.”

“But due to the outbreaks of new mutations, Indonesia has now implemented a stricter lockdown until 8th of February, which will most likely be extended.”

“We don’t expect Bali to open for ‘normal tourism’ (visa free or visa on arrival) soon. We expect however, that soon it will be possible to come to Bali again by applying for a business or social visa like it has been before the 31st of December.”

“In any case, foreigners holding a KITAS, KITAP (work permit, residency) or with diplomatic visas, can still enter Indonesia.”