The last twelve months have been a wild time in the world of men’s grooming.

The Spicy Cough saw the rise of the ‘lockdown beard‘ as men around the globe found themselves mostly homebound with no need to stay trim. We’ve also seen the humble mullet – and its raucous cousin, the skullet – come back into fashion in a big way.

The other big COVID grooming trend for men has been to get a buzz cut or just shave all your hair off – dubbed the ‘hard reset’ or ‘midlife crisis’ cut, even celebrities like Cristiano Ronaldo have got in on the action. It’s a similar school of thought to the lockdown beard: if you’re looking for a low-maintenance haircut, it’s hard to beat…

I’ve always been a fan of 90s style, and nothing gets more 90s than Brad Pitt as Tyler Durden in Fight Club. I’d been rocking the same haircut for years and thought it was time for a change – and short hair’s great for summer in the meantime. So over the new year, I decided to bite the bullet and get a #1 all over; commit to the hard reset. Less than fifteen minutes in the barber’s chair and I was reborn. A blank canvas. Or so I thought.

Here’s what I learned.

Once the novelty of your freshly-buzzed head wears off, you’ll probably find out in the coming weeks that you’ll fall into one of two camps: either that it’s not short enough or it’s too short.

Personally, I fell into the latter, although I expected to fall into the former. I thought before I went in that maybe I’d been too conservative and should have gone even shorter: a #0.5, maybe. But actually, I’ve found that as my hair grew out a bit, I found I preferred it to how it looked straight from the hairdresser.

Much of that was to do with how surprisingly (and unsettlingly) my scalp was. Which leads me to my next point… 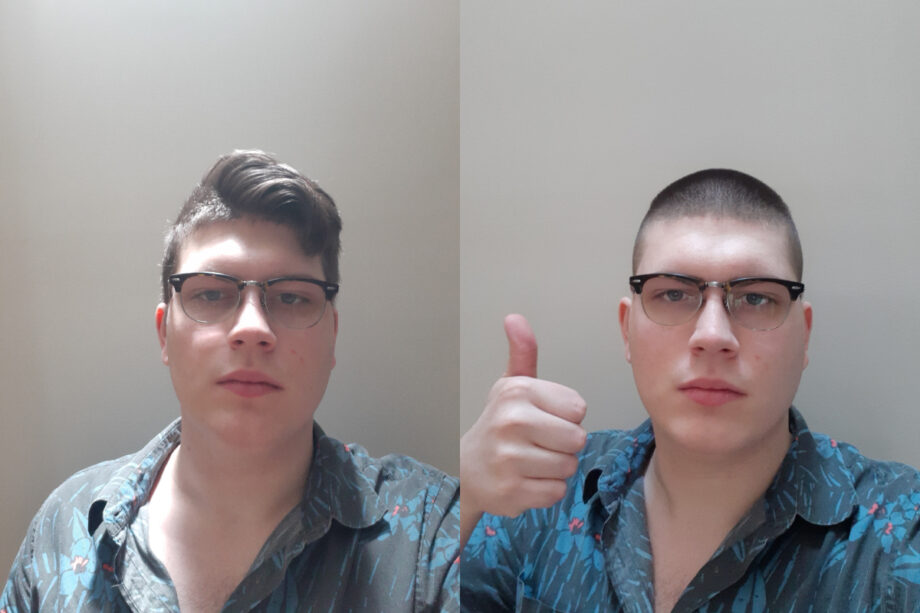 Before and after the barber’s. As you might be able to guess, the regret didn’t take long to kick in.

Jesus, my scalp is so white

Not only does my hair grown incredibly thick and fast, but I’m also one pasty, pasty boy. So it was pretty shocking to see just how pale my scalp was without a forest of hair – proof positive I have spent too much time indoors over the last twelve months.

It’s definitely something worth keeping in mind before you commit to the clippers, especially if your complexion’s darker than mine or your hair isn’t as dense. Just as a singlet tan makes you look like a dorky middle-aged British life insurance salesman, too much of a contrast between your head and the rest of your skin can look rather jarring. Be warned.

A-listers are A-listers for a reason

how lads think their isolation head shave will look vs how it turns out pic.twitter.com/eWpRkYIWRx

If anything, it’s been a potent source of motivation to start working out so that my summer rig matches my summer ‘do. So that’s a positive, I guess.

The maintenance factor is a big plus

It has been pretty refreshing not having to worry about styling or really even brushing my hair. Again, super short hair is great for the summer (the risk of a sunburned scalp notwithstanding): it’s been a game-changer where going for a swim is concerned, too.

Of course, short hair doesn’t mean you can completely forgo hair maintenance. Skin conditions like dandruff and eczema are naturally more obvious when you’ve got less hair to disguise it, and if you’re already losing your hair, you need to pay extra attention to your buzz cut to make sure it’s consistent.

Ironically, men who are losing their hair often have to spend more time cutting their hair than those who’ve got plenty. Shout out to my dad. (He rocks the buzz cut better than me, truth be told.)

Of course, part of the appeal of the hard reset is that it’ll get people paying attention. So far most of the feedback I’ve got has been positive, but if you’re in your 20s like me you should also expect plenty of people to have a go at you (especially women). Gotta take the rough with the smooth…

I’ve started calling it my quarter-life crisis (although as my brother pointed out, that’s perhaps quite an optimistic take).

So far, so good. I have to admit that the idea of doing the hard reset sounded really good in my head but like most of these sorts of things, the reality set in quick.

Much like anything grooming or style, confidence is key. Initially, I felt hesitant; self-conscious; deeply regretful that I’d taken the nuclear option instead of trying to subtly restyle my current haircut. But I’ve really grown to love the buzz cut – it’s comfortable, liberating and surprisingly versatile. Once you own it, it reaps rewards.

I’d be lying if I wasn’t looking forward to having my hair back out to its previous length and being able to experiment with different styles, however. In short (get it?) I’m not sure if the buzz cut will be my permanent look, but I’m enjoying it while it lasts.

Or at least that’s what I’m telling myself. But that’s half the battle, isn’t it? And perhaps that’s the moral of the story.

If you’re feeling inspired, check out our guide to the best short hairstyles and haircuts for men. The clippers await…