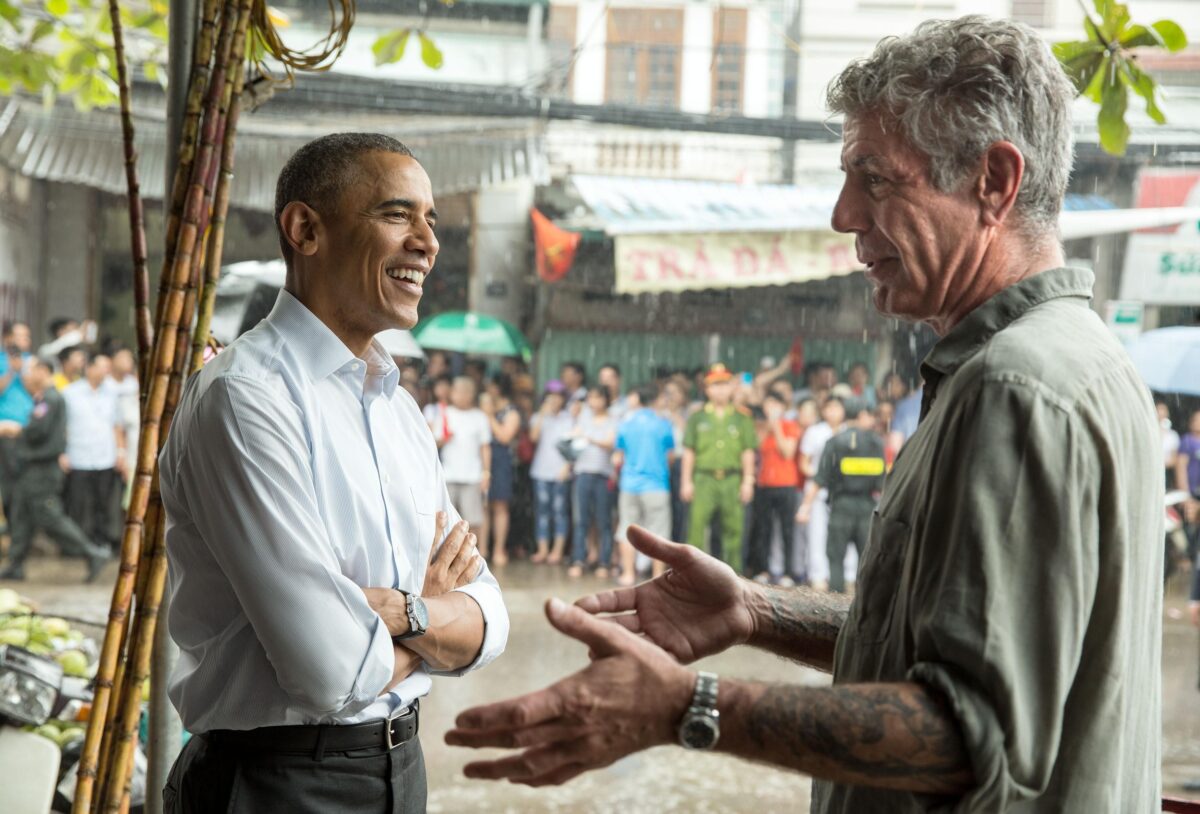 Believe it or not, Anthony Bourdain wasn’t all about getting boozed up on saké. He put pen to paper too. And when the late great wasn’t busy writing books like Kitchen Confidential or testing the limits of his tastebuds, he was wining and dining the likes of Barack Obama, and dropping quotes that would be remembered for years to come.

Enter: the following phrase, uttered by Bourdain during an episode of Parts Unknown, whilst tucking into a casual restaurant in Hanoi, Vietnam with Barack Obama, who was in the final months of his presidency.

“I just wish that more Americans had passports.”

Though many of today’s politically divided Americans would probably see this as elitist, situated in context (think: cold beer, plastic stools) it can be seen as a heartfelt, humble wish that more of his compatriots would (and could) get out and see the world.

Bourdain followed the quote with: “The extent to which you can see how other people live seems useful at worst, and incredibly pleasurable and interesting at best.” Obama replied: “It confirms the basic truth that people everywhere are pretty much the same.”

In a Medium article, C.J. Strike, an American foodie and blogger, wrote that this interchange helped him realise: “Once you see other people of the world with the same types of issues and concerns you have (or worse), but being able to deal with it in a way that isn’t restrictive, or condescending, or even combative, it makes you realize that the world is a place that has issues the same as we do, and that part of being a global culture isn’t forgoing making your own country ‘great again,’ it’s working together with the world to make your already great country even better by utilizing ideas and methods that you may not have gained had you simply stuck to what you’d know, if you’d never left your home town.”

“The world is a big and scary place, but it’s not all that different. Just because a country may look, or smell different, or have people that look different, doesn’t mean that it doesn’t have similar issues and potentially resolutions to issues that we’ve never thought of… So, if you can, get a passport, take a trip.”

Many Twitter users have been inspired by this Bourdain quote over the years too.

Three #AnthonyBourdain lessons: 1. “I wish more Americans had passports” (Mark Twain quote below to expand) 2. Share a meal & conversation with everyone you can, even those with whom you disagree 3. Every plate has a story; Be curious and try to learn that story pic.twitter.com/2Jc05ZcSvm

With many of the world’s borders currently shuttered, and with countries like Australia now, Traveller reports, at risk of becoming “hermit kingdoms,” this Bourdain quote is now more relevant than ever. Though the world was as much an oyster as it had ever been just a few years ago (thanks to cheap international flights and a relatively healthy global economy), fast forward to January 2021 and the situation is very different.

Thanks to increased flight prices, heightened health risks and wider bureaucratic nets to navigate, we have now seen a dramatic shrinking of many people’s horizons.

RELATED: ‘I Felt Safer Being Alone There Than I Do In The States Most Of The Time’

To a degree this is sensible. But a balance must be struck. It’s as if the world has gone to the physio with an injury – we don’t want to rush back too quickly and make things worse, but we also don’t want to cower for any longer than strictly necessary, lest things (in this case, goodwill and empathy) start to atrophy.

Studies have backed this up. The Journal of Personality and Social Psychology found that people who travelled regularly were more open to new experiences, for instance, according to Nomadrs.

“This makes sense: The more open-minded you are, the more willing to experience different cultures and embrace new perspectives.”

As author Mark Twain once said: “Broad, wholesome, charitable views of men and things cannot be acquired by vegetating in one little corner of the earth all one’s lifetime.”